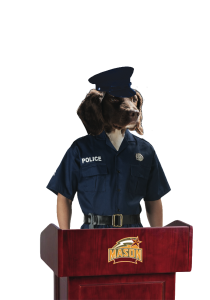 There was upheaval in the Mason Police Department this past week when, in response to the recent bomb threats, President Cabrera has reportedly selected a new interim Chief of Police with a specialty in explosive ordinance. In an email sent out to the Mason community on Saturday, Mar. 29, Mason Police Chief Eric Heath stepped down and said a few words about his legacy.

“We’ve made great progress here this year,” said Heath. “I think the current situation will be… interesting.”

Heath’s replacement is Lucy, an English Springer Spaniel and a recent graduate of the explosive ordinance detection school.

Though new to the position, Lucy has already taken steps to change how Mason’s police force operates. Doggy doors have been installed at the police headquarters and plans are in the works for additional accessibility to the police cars, a plan one Williams described as “a travesty”.

Some of Lucy’s new policies include a mandatory “windows down” car patrols. Lucy also hopes to bring potential advancement from Mason Cadets to Police with a new “belly-rub program”, though Lucy wasn’t able to say more on the subject at the time. For now though, focus for Mason Police has been shifted into investigating the bomb threats.

“Our focus needs to be directed towards stopping these bomb threats. All other investigations,
said a recent internal memo, “have been put on… paws.”

“It’s tough getting used to a new boss with a new way of doing things. It’s important for the old Chief to help facilitate that process. We don’t want too many people around here barking orders,” said Heath. “We’re all trying to get adjusted here. This has been a pretty ruff week for all of us.”

Lucy’s handler, Master Police Officer John Arnold, could not be reached for contact. However, a former contact from explosive ordinance detection school said he found the decision “disappointing”.

“I haven’t been here very long, but I already feel like the student body is my liter. Our commitment is chiefly to the students, and we’ll do whatever is necessary to keep them safe and make sure college is an enjoyable experience for everyone. That policy will never change.” Lucy paused for a moment to take a call, then responded, “We’ll have to continue this dialogue with the Mason community another time, a student’s just fallen down a well.”