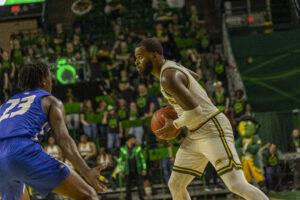 Men’s basketball team continues to be better at home, being undefeated at EagleBank Arena.

Mason men’s basketball remained undefeated at home after securing a victory against Queens College of Charlotte. The final score was 72-65.

“Good win for our group, just have to keep getting better…guys, got back to full health,” said Coach Kim English.

“Ronald was really good and I’m proud of our guys.”

“Just staying together, playing for each other–it’s one possession at a time, get a stop, so just playing for the team,” said Polite III. 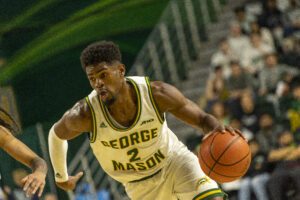 Senior Josh Oduro led the Patriots with 21 points and 11 rebounds.

Hofstra’s Aaron Estrada was fouled while making a basket to tie the game at 68 in the second half but missed the game-winning free throw behind his 31 points. 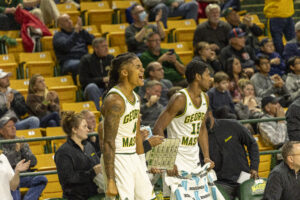 Mason grew its winning streak to three, taking down the Toledo Rockets 80-73.

Graduate guards DeVon Cooper and Victor Bailey Jr. led the team in scoring. Cooper had 19 points, including 3-of-5 from three-point range.

Bailey Jr. achieved his first double-double, with 11 points and 10 rebounds.

The Patriots will be back in action at EagleBank Arena on Tuesday, Dec. 6 at 7 p.m. against Maryland Eastern Shore.