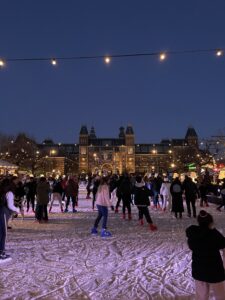 If we are talking about a season where it becomes cooler after a long summer, nature is turning into a beautiful palette of red, orange and brown, and the season of the pumpkins, we are obviously talking about the fall. Even though the fall season in the Netherlands shows a lot of similarities with America, there are also differences.

Here in America fall season is all about farm markets, beautiful colors and of course Halloween, but imagine that the fall season is known for the rain, then it becomes suddenly less fun. If you ask random Dutch people about the fall, they will probably mention the amount of rain that falls during this season.

However, if you look at the bright side of fall in the Netherlands, it also has fun stuff during this time of the year.

Here are four things you need to know about the fall in the Netherlands:

THE DUTCH MOORLANDS IN FULL BLOOM

You know summer is coming to an end and fall season is starting when the heather in the Dutch moorlands is in full bloom. Most of the nature reserves in the country consist of moorlands where heather fields will turn into all shades of purple and lilac at the beginning of September. It kind of looks like the blooming lavender fields in France.

Like every country, the Netherlands also has its own specific food they typically eat during the fall season. One example is Dutch apple pie, even though apple pie is also a real American thing, Dutch apple pies taste differently. It has a better texture because you can really taste the actual flavor of an apple with less sugar.

Another sweet thing that is typical for the season is speculaas. It is a typical holiday cookie, that traditionally is made for the Dutch celebration of Sinterklaas at the beginning of December. However, nowadays you can get it all year round. Speculaas cookies are usually shaped like windmills and are a type of spiced short-crust biscuit baked with speculaas spices.

The fall season and erwtensoep (pea soup) are things you immediately connect if you are Dutch, also known as snert. The soup is made of split peas, vegetables, and slices of rookworst (Dutch smoked sausage). The best erwtensoep is when it is so thick that your spoon can stand upright in it. Typically, with this soup, you eat rye bread with katenspek (a Dutch type of bacon).

Traditional comfort food during the fall is stamppot which is a perfect meal for the colder days. You would find definitely it on some restaurant menus during the colder day and they come in many different varieties. A stamppot is potatoes mashed with vegetables and topped with rookworst (Dutch smoked sausage).

While the rest of the world relates December with Christmas, the Netherlands has another big celebration in the same month: Sinterklaas. Every year Sinterklaas comes from Spain to the Netherlands on his steamboat, the Pakjesboot 13 (Present boat 13) with his many helpers, Pieten (Petes). On their boat, they bring many presents for all the children.

The real celebration of Sinterklaas is the night of Dec. 5, also known as pakjesavond (gift evening). At one point in the evening, the Pieten knock on the front door and leave jute bags filled with presents. Sometimes kids get lucky, and they get a visit from Sinterklaas and his Pieten when they bring over the presents.

One of the most Dutch things you can do in the Netherlands when you are there during the fall season is ice skating. As soon as the temperature drops, ice skating rinks are popping up around the country. Dutch people are passionate ice skaters. If you would ask around the country almost every Dutch person can ice skate.

One of the most beautiful open-air ice rinks is in front of Rijksmuseum in Amsterdam. It is not the best ice to ice skate on since it is fake ice and always super busy, but for the view definitely worth it. After a few hours of ice skating, you can buy a nice cup of hot chocolate and eat poffertjes (Dutch mini pancakes)

When the temperature drops low enough for a longer period, lakes and flooded meadows turn into ice skate rinks. Even the canals in Amsterdam will turn into one big ice rink where you can find most Dutch people. In the past years, it did not happen a lot since the weather is warmer during the winter, but you are assured that if the temperature drops low enough you find almost all the Dutch people on the ice. Along the water, you would probably find some koek-en-zopies where you can buy split pea soup, hot chocolate, or enjoy a steaming cup of gluhwein (Dutch hot mulled wine).

Well after this whole list you can describe the Dutch fall as a typical Dutch word: “gezellig”. This word cannot be translated into an English word, but the meaning includes everything from cozy to friend, from comfortable to relaxing and from enjoyable to gregarious. Probably after visiting the Netherlands during this season, you will understand what is meant by the word “gezellig”!

FUN THINGS TO DO IN D.C.