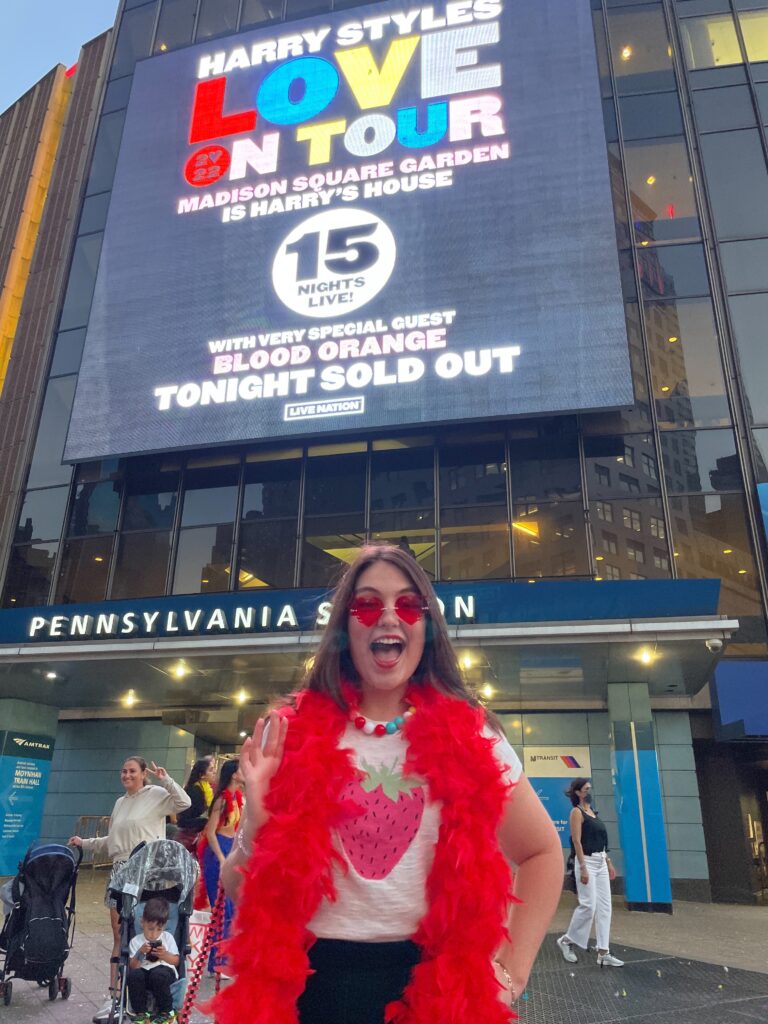 Walking through midtown Manhattan, one may expect the streets to be littered with unsavory debris and irritable New Yorkers. 11 nights into pop-phenom Harry Styles’ 15 show residency at Madison Square Garden, the streets are instead adorned with rainbow feathers and infiltrated by out-of-towners in bedazzled bell bottoms.

Styles, 28, rose to fame as part of the world-famous boy band, One Direction, after appearing on the XFactor in 2010. Since then, Styles has released three solo studio albums. His most recent, simply titled “Harry’s House”, has catapulted him to one of the most beloved and media-covered artists on the planet. Now, Styles is continuing his most recent leg of the Love On Tour, with four residencies in New York, Austin, Chicago, and Los Angeles.

Outside the venue, fans dressed from head to toe in bright colors, boas, and assorted fruit paraphernalia congregate to take pictures and chat with fellow Styles admirers about what they expect to see at tonight’s show. Styles managed to sell out all 15 nights at the Garden; he is the first artist to achieve this at the venue. This accomplishment is not surprising after witnessing the commotion that turns 33rd Street & 8th Avenue into something of a pre-show block party among attendees.

Before the show even begins, the energy in the arena is unmatched. The stage is set up in the round, with people filling the pit on all sides. During the pre-show playlist, fans on the floor, strangers before this evening, lock arms to imitate the Rockettes kickline to Frank Sinatra’s “New York, New York”. People compliment each other’s extravagant outfits and discuss the night’s potential setlist. The anticipation in the room is palpable.

The crowd roars as security guards haul out a human-sized box from backstage, known to contain a squashed Harry. A psychedelic cartoon intro to a new track from “Harry’s House”, “Daydreaming”, plays on the big screen, signaling Styles’ impending arrival. A spotlight beams down to center stage and Styles rises from beneath the floor. The crowd goes, literally, wild.

Styles works all sides of the stage, showing off his signature tantalizing dance moves. His charisma permeates the room. Even a simple wink from the pop sensation evokes wailing and tears from those lucky enough to be in its general direction.

In between songs Styles stops to talk to members of the audience, asking them about the signs they’ve made for the show. Harry even had the crowd sing “Happy Birthday” to one young woman with a sign telling him this is how she chose to celebrate.

What sets this show apart from any other concert I have ever been to was the overwhelming feeling of acceptance and inclusion. Styles tells the audience every show to please “Be whoever it is you have always wanted to be in this room tonight.”

Fans in the pit hand Styles pride flags, which he waves around the stage. People dance uninhibited, not for vanity, but out of joy, freedom, and overwhelming excitement.

From the people on the floor to those in the highest seats, there is genuine sincerity and electricity that elevates the show to an unparalleled atmosphere. People of all ages and identities are gathered around good music and the idea that everyone belongs.

More than eccentric outfits, outrageous sex appeal, or his chart-topping hits, Styles’ performances resonate with the audience because of his emphasis on community. Within 90 minutes, Styles is able to provide his fans with a home, not only with him but with each other.

Styles is known for championing the message “Treat people with kindness,”; he even has a song on his 2019 album, “Fine Line”, titled just that.

Being in the audience at Madison Square Garden this month, it is evident that Styles surely practices what he preaches. His ability to create such an exhilarating and welcoming environment makes his performances undeniably special.

MASON NAMED “BEST OF THE BEST” FOR LGBTQ+ STUDENTS