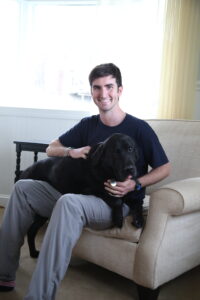 When I first noticed Forrest Allen, he was walking around campus with his black lab, Toliver. His stride had an upbeat attitude to it. He waved to nearby students and gave a friendly “hello” with a cheerful smile. Little did I know that this cheerful attitude could be defined more as bravery, for all Allen had conquered in his life: Allen had a traumatic snowboarding accident that occurred on Jan 14, 2011.

Allen’s experience is captured through the 2020 documentary “Music Got Me Here,” directed by Susan Koch. This film provides personal insight into the struggles and perseverance Allen had.

“Forrest, age 18, suffers a life-threatening traumatic brain injury that leaves him trapped inside himself and unable to speak or move for nearly two years,” they explained in the film.

The film shows how the use of music therapy with specialist Tom Sweitzer helped Allen find his voice. Allen’s family was desperate to find a way for him to connect with this life. After trying many types of therapy music appeared to be the one that worked miracles for Allen.  He uses music as a tool to not only express who you are, but find who you are.

“If I didn’t have the support it would have been a lot more difficult. It’s helpful to have that support get you up to where you wanna be and gain that independence,” Allen said.

Ten months after the accident, Allen blew his first note on the recorder. Shortly after that, he said his first words: “Good morning,” at six in the afternoon. Allen was making so much progress.

“That was the moment I knew that many other things would be possible for this young man,” said Sweitzer.

Through the continuous support of family, friends, and doctors, Allen’s speech continually improved, along with his motor skills. It was a beautiful moment to see captured in the documentary, “Music Got Me Here”.

Allen, unfortunately, faced a series of setbacks in his speech due to an infection in his brain, meaning he had to undergo life-threatening surgery and face the possibility of losing his voice again.

After finishing his final surgery, Allen went back to high school and graduated in 2014. He helped others in their music therapy journey and served as a walking, talking inspiration to everyone around him.

“Forrest’s story is just amazing. After this incredibly severe brain injury, to be able to learn to express himself and then ultimately speak,” said Dr. Francis Collins, director of the National Institute of Health.

Allen is now a junior at George Mason University and has achieved so much academically. By reading his blog, audiences can get more insight into how his transition from high school to college went.

Allen offered some tips and motivation for people who are in similar situations.

“If you think you can, give it a shot, because if you think ‘oh, I can live on my own’ but you’re sitting in your room or basement playing Xbox, watching TV, etc, you’re not really branching out to the goals that you can try to reach,” Allen said.

Allen continued and gave a metaphor for achieving goals in life. For example, if you think you can run a mile, start with 100 yards, then try for 200 yards, and keep going until you reach that goal.

AFTER A DRY SPELL, THE ACADEMY AWARDS ARE BACK IN THE SPOTLIGHT