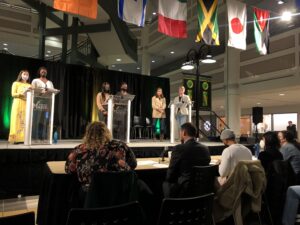 Six candidates from three campaigns participated in the spring Student Government Executive Ticket Debate on March 30 in the Johnson Center.

To start off the debate, the floor was opened to the vice-presidential candidates to discuss the topics of their administration, campus diversity, collaboration and school spirit.

Hodnett started off by stating that “As vice president, I will be sitting on committees that the president is on to make sure that students are heard and understood.” said Hodnett.

However, the most important aspect of the role of vice president, in her opinion, is that she will be “holding the president [Oni] accountable.”

Hurd took a different approach to the topic of administration, “I usually am a quiet person and an organizational person. John is a pain in my butt and is stubborn,” said Hurd. “John can get things done, he’s persistent and stubborn and I know how to organize them.”

The moderators then allowed the presidential candidates up to the podium to address subjects such as the Board of Visitors (BOV), working with the Student Senate and making Student Government effective.

He then made a promise to put a cap on and decrease tuition for students, which Oni dismissed as not being realistic.

Oni referenced her experience as a part of the Student Senate to state, “Unfortunately, because tuition just increased it wouldn’t really be possible for you to decrease tuition considering it increased not too long ago.”

Then, Ngyuen went through her platform for the Board of Visitors, which focused on police reform on campus, understanding where hidden tuition fees go and better treatment for Mason’s janitorial staff.

“The Board of Visitors is an extremely important committee to be a part of, and if elected, I will be excited and ready to voice all of my opinions and students’ concerns during their meetings and create solutions with them,” said Nguyen.

The moderators then moved the debate to answer questions from the audience, one being plans to support the LGBTQ+ community on campus.

Hodnett detailed their plan included listening and attending LGBTQ+-run events and making sure they established face-to-face contact, which Oni supported by stating, “It is important that we also listen and support these students as their perspectives and concerns are equally as important as everyone else’s and their concerns need to be met as well,” said Oni.

Jennings agreed with the previous statement from the other candidate about supporting the community, and then repeated that he plans to have a diverse cabinet so that he can “Go and understand… from someone else who has different experiences from myself.”

Apenteng emphasized the importance not only of supporting the LGBTQ+ community, but that they plan to teach more LGBTQ+ history in the classroom, citing new Mason Core options. “It’s not just about seeing people that look like you but it’s also about hearing people who have those experiences and to relate to what you’ve been through and the community that you’re from,” Apenteng said about the plan.

The candidates then reflected on their performance in the debate.

“I definitely think I could have expanded more on my points, but I feel like this incentivized me to get to know students more on campus and listen to their concerns. I am looking forward to meeting more people on campus and listening to what issues they deal with on campus” said Hodnett.

“We definitely have so many great things [as] a part of our platform that we hoped we set across tonight. We know we did good, but obviously, there is always room to improve. In regards to voting, we are obviously really nervous but we really want this and want to advocate for the student population” said Oni.

“Everything that we said is true to heart, we will implement everything and all of the promises that we have given,” said Nguyen.

“It’s kind of a testament to our platform… we were prepared for all of those questions because it’s part of something that we want to solve on campus, and it’s the inclusion part of our campaign, all of it was just something that we are familiar with and I think that’s what students are looking for and it’s what they need,” said Apenteng.

“I think overall we came prepared and I think it went pretty smoothly and pretty well,” said Hurd.

“I think it went very, very well. We kept our composure, it was great. We got to really share why we are the best choice to lead the student body. We basically laid out our platform, such as a Dead week, advocating for a football team and blue lights on campus to curb sexual assault and rape,” said Jennings.

In regards to controversial statements of transphobia and anti-choice views on Jennings’ Twitter account, Jennings and Hurd both commented on the matter.

Students can vote for Student Government candidates from April 4 through April 8 on Mason360.