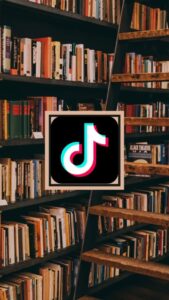 Laynie Rose Rizer is shutting a book and putting it on a shelf when the book asks her “Why does this sound like goodbye?” She answers “Because it is,” as “Mr. Loverman” by Ricky Montgomery plays in the background. This TikTok, posted on Nov. 7, 2021 already has over 56,000 likes, and over 100,000 views. It is part of a community on TikTok found under the hashtag #BookTok.

So what exactly is BookTok? Named “the last wholesome place on the Internet,” by Refinery29, BookTok is a space on TikTok where creators review, explain or make funny videos about books. Kathy Ellen Davis, a social media coordinator for an indie bookseller association, children’s author, and a bookseller at Bards Alley, started on TikTok in late 2019 and decided to make videos about books, something she hadn’t seen on the app yet.

“I called these one-minute videos “BookToks” and [I] was the first to use that hashtag actually,” Davis said.

Davis’ “BookTok Day 11” TikTok, posted on January 1st, 2020, went viral and she gained over 20,000 followers, with the video getting over 1.7 million views. Ever since then, BookTok has become a booming community with hundreds of posts every day. Davis said that the meaning of the hashtag has changed since she first used it.

“Some smart people younger than me took over the hashtag to mean all of the book side of TikTok and I love that it’s turned into that,” Davis said.

Now, BookTok can even be used to network with booklovers, bookstores, publishers, authors and more. Rizer even stated that East City Bookshop has gotten early access to books from connecting with people on TikTok. This is a space where people with unique and creative videos can become viral, and local bookstores have started to notice.

“BookTok is definitely having an influence not only on indie bookstores, but also publishers and bestseller lists,” Mary Powers said. The Marketing Manager at Politics and Prose in Washington, D.C. Powers mentioned that many books that have gained notoriety on TikTok have directly resulted in an increase in sales of those books at indie bookstores, like “The Love Hypothesis” by Ali Hazelwood.

Some of the books that gained widespread popularity on TikTok under BookTok include “The Song of Achilles” by Madeline Miller, “They Both Die at the End” by Adam Silvera, and “The Seven Husbands of Evelyn Hugo” by Taylor Jenkins Reid.

According to Rizer, the popular books from BookTok were previously “backlist books past their debut season.”

“Song of Achilles and They Both Die at the End are both particularly interesting because neither of them are titles that I can remember selling a ton of pre-pandemic,” Kat Michalak said, the Website and Marketing Associate for Politics and Prose.

Rizer had a similar story. “We’ve seen sky-rocking sales for books that were published three, five, even 10 years ago,” Rizer said.

And it’s not just teenagers and young people contributing to BookTok. “We get readers of all ages who are on TikTok and like these books,” said Davis.

The rise of these titles on TikTok now influences the books that these stores carry. Smaller bookstores tend to carry a reduced selection of books compared to big chains like Barnes & Noble because of capacity. Even so, TikTok is bringing the popularized books from the app into indie bookstores.

“Because BookTok influences the market, especially by elevating books by BIPOC authors or books with LGBTQIA+ characters and relationships, it also means that we are able to carry more stock of these titles as well,” Michalak said.

BookTok certainly isn’t going anywhere, and Davis has found a way for local bookstores to make TikTok work for them. “I recommend stores remember that they don’t need to be everywhere all at once, and they are the boss of social media, not the other way around,” Davis said.

Davis suggests small business bookstores experiment with their content, but not overdo it. “They can’t spend so much time on it that they don’t have time to run their business,” Davis stated.

Rizer cites the best way for bookstores to use TikTok is to “find their voice.” There are so many bookshops on TikTok under the hashtag that local shops need to find what makes them stand out and unique, according to Rizer.

As Davis explains, booksellers are genuine people who are passionate about what they read and recommend, and it shows—so why not use it to their advantage on social media?

Local bookshops are being encouraged by the online community to produce more video-form content, according to Michalak. “A lot of people on TikTok are creating content in a “if you like this, try this” format and we’ve done a bit of that on our social media platforms and in our emails, and it’s worked” Michalak said.

At the same time, Davis says there is no reason to “reinvent the wheel” and repurposing content can be useful to local shops too, which happens to be a great way for them to avoid social media burnout. Either way, BookTok has been a great inspiration for young readers to “shop local and purchase books from indie booksellers instead of Amazon,” said Powers.

BookTok’s trends are ever-changing and unpredictable. “There is so much potential on the app and in the BookTok community that we’re just beginning to tap into, and I’m excited about delving more into it,” Michalak said.