Editor’s Note: The questions and responses have been edited for length and clarity. The questions were asked by those in attendance.

Tara Strong is well known for her voice acting in various animations and popular video games, spoke at Mason over the weekend for a Q&A during the Game Mason event. Tara Strong has voiced over 100 different animated characters, ranging from Harley Quinn from the “Batman” cartoons, Bubbles from “The Powerpuff Girls”, and Raven from the Teen Titans series.

Strong was born on February 12, 1973, in Toronto, Canada and immediately knew she wanted to start acting. When she was at the age of four she started performing at various plays, particularly at Yiddish theaters.

Strong loved waking up on Saturdays to watch cartoons. “I would watch “The Smurfs”, The Flintstones, but I never thought that this was gonna be my career,” said Strong. Strong got an agent at 13. Her first role was the voice of “Hello Kitty”. “I have pictures of me as a 5-year-old and my dad in a furry [Hello Kitty] suit,” said Strong with a laugh.

Later in her career, she began her education, studying improv and sketch comedy at The Second City in Toronto, where she took some classes and practiced on stage. Although she was playing in large roles prior to attending Second City.

“Video games, you always work alone, and prior to the pandemic, we worked as a cast for shows. Which makes it so fun, and I’m sure there are a lot of actors on this track. You’ll know that acting is listening and playing off the other actors is fun and you don’t get to do that for video games, because there’s a tremendous amount of dialogue. Video games also usually don’t have great directors, so anyone thinking about getting into it, make sure you know they have a good director, because if someone is really green and they ask for too many death sounds or screams, it can really blow out your voice and muscles, so be sure to stand up for yourself.”

“DO YOU OR ANYONE IN YOUR LIFE FIND THEMSELVES PLAYING GAMES THAT YOU ARE IN, IF SO DO YOU HAVE A FAVORITE?”

“I wish I played . I am not great at them, you know, I grew up with “Space Invaders” and “Pacman”, so I’m not awesome at them. But my youngest son, my 17-year-old son, likes to play Injustice and also “Kingdom of Hearts”. One night I come home and he’s like “Mom, I just killed everyone as you (Harley Quinn] on “Injustice”

Strong has also voiced arcade fighting games, like Li Mei on “Mortal Kombat X”. However, Strong has said that Quinn is by far her favorite character she’s voiced in video games.

“She’s my therapy, I can just go in and start screaming. She started out as an abused woman and has now found her power and I found myself growing with her. I love her so much.”

“YOU HAVE DONE LOTS OF WORK WITH SUPERHEROES AND COMIC CHARACTERS, DO YOU HAVE ANY EXPERIENCE THAT GRAVITATES YOU TOWARDS THAT ROLE?”

“First of all, I feel so lucky to have played so many iconic characters that empower young girls, characters that make people feel seen and matter and relate to. It’s really important and I carry that honor with me every single day, so let me just start there. I did collect Batgirl as a kid and I liked that darkness of her. I like my “Batman” stuff, dark. I like it very serious.”

“WHAT CHARACTER HAVE YOU VOICED THAT’S MOST LIKE YOU?”

“So many of them are like me. There’s so much of myself that goes into these characters, which is why I think they translate. They really become this symbiotic creation. I can be a lot like Bubbles because I’m super nice and sweet, until you really piss me off, like you have to really do something vindictively to hurt me and then I get really scrappy. Harley, like I said, I have grown with her into this girl power who doesn’t need this need a misogynistic person. I’m also a lot like Raven. I like my alone time. I like my meditation. I don’t know, a big part of me is in a lot of these characters.

Strong has played countless amounts of roles and is one of the most accomplished present-day voice actors. Strong attributes her continuous motivation to moments where she gets to interact with fans on a more personal level.

Strong goes to conventions  to enjoy these precious moments with fans. “I met this girl who was dressed as Raven with her mom. I see the mom crying and I go over and ask if she’s okay. She says, “My daughter is severely autistic and hasn’t spoken in 5 years, as soon as she knew you were coming she hasn’t stopped talking” I was like oh my god, its these types of moments”

There was another kid at a con, who was deaf that wanted a Harley autograph. I signed to him asking him if he can feel the vibrations, he said yes. So I put his hand against my throat and spoke as Harley. Everyone around started crying. It was very special.”

“IF YOU HAD TO SWITCH CAREERS RIGHT NOW, WHAT WOULD YOU DO?”

“Well for all the people out there who follow my socials know that I’m a huge animal lover, so I would do anything with animals. I would love to do marine biology and hang out with some dolphins, and seals. Something to do with animals. Maybe something like a big giant rescue, which is my dream anyway,” said Strong

“DO YOU HAVE ANY TIPS FOR WHAT STUDENTS CAN DO TO BUILD THE EXPERIENCE TO SUCCEED IN VOICE ACTING?”

“Do you guys know Dee Baker? He has a free online class which is a great place to start. There’s a lot of great information and getting into the business side of it. I always tell people to take a scene studying, because it’s so important. When you’re in a studio and they want you to do a little boy, a little girl, or a different character, doing improv makes you less afraid to jump and try something. It’s a wonderful confidence builder, even if you don’t want to be an actor. Acting lessons are important. Singing lessons, super important. It’s a muscle so you have to work it, you often have to sing in shows, and if you have been taking singing lessons it’ll help. Don’t listen to someone promising you work, nobody can. Never ever pay to audition, I hate that so much. It’s a scam.” 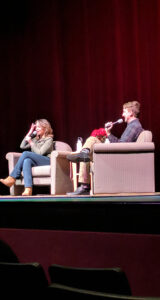 Strong gave one piece of parting advice, “If every single cell in your body is into voice acting, go for it. Don’t beat yourself up if you don’t get a part.”

PATRIOTS FALL SHORT IN AN OVERTIME BATTLE TO UMASS