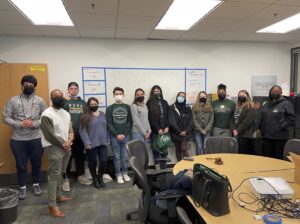 A spring Farmer’s Market, a liaison resigning and a debate over disciplinary strikes

On Feb. 24, the 42nd Student Senate met over Zoom to discuss issues relevant to the student body. The meeting went according to the agenda and went straight into committee reports after introductory measures.

Chair of the University Life Committee, Sophia Ngyuen, mentioned her plans for the second edition of University Life’s Farmer’s Market after the success last fall, “In the fall semester, I hosted a Farmer’s market event that was a huge hit for Mason students. We invited six small businesses on campus to sell their food items, and we advertised these events as a way for students to relieve their stress during the mid-term season.”

The fall Farmer’s Market was a huge success, “For Student Government, we wanted to give out free items to students, we decided on purchasing pumpkins for students to bring home. Our pumpkins were all gone within ten minutes. Also, during that event we had all of our venders sell out of all of their items. The event was the hugest event that Student Government has ever done!” Nguyen stated.

The success in the fall prompted University Life to bring the event back in the spring, “Because of student demands, we are now hosting a spring Farmer’s Market, we hope to have about ten vendors, and we plan on giving out free reusable tote bags/chico bags to students to promote our upcoming Earth Day [event] that will be in April.”

The spring edition of the Farmer’s Market will be on March 31st.

Following that announcement, Outreach Liason Zayd Hamid announced he would be stepping down from the position, stating “I am the first Outreach Liason and, due to my ascendance to chairship among other present conditions, I know that I will not for much longer be able to adequately fulfill the duties of this position. Therefore, to make things easier on whoever my successor shall be and to enhance and refine this position.”

The meeting then went into a lengthy discussion about Bill 19, which would clarify how disciplinary strikes work for Student Senators. The ensuing discussion lasted over one hour for deliberation on an amendment to the bill and then the discussion and vote on Bill 19 itself.

The amendment did pass however, that did not stop a debate about what it was about. The amendment was about whether strikes should be cleared or not at the end of each Student Senate session. Senator Dylan Morse called the proposed amendment, “not fair” and “unnecessary”, while bill co-sponsor Vice Chair Olivia Nealon voiced support for the bill, specifically for those who have personal and real-life issues.

Bill 19 was then voted upon,  and initially passed with a flat majority, however because of Roberts Rules of Order, code bills require a two-thirds majority to pass, which the bill did not.

Hamid was also the author of Bill 19 and was determined to get another bill passed on the same issue after it did not pass, “While I believe that Bill #19 was a good bill that would have bettered the Senate with its passage, I reaffirm my commitment to the institution that I have been sworn to serve in…This will not be the last code bill that I write and this will not be the last time I propose an amendment to the strikes system.”

One of those who voted no on the bill was Senator Morse, who explained his reasoning behind his vote, “While I appreciate and respect the efforts of my colleagues and understand the need to clarify that section of the cote, I voted against the bill because I didn’t like the message of giving senators three strikes, but not allowing them to actually use the strikes they are given in practice. Of course we don’t want to use any strikes, but they are there are a reason and we have three for a reason, so I wanted to hold true to that. So while I’m glad Bill 19 did not pass, it does present an area of work in our code that will require further examination. Respect to all senators for a great debate and I’m looking forward to further efforts.”

With COVID-19 cases going down at Mason, meetings of the 42nd Student Senate will be back in Merten Hall on Thursdays at 4:30 p.m. in Room 1201.