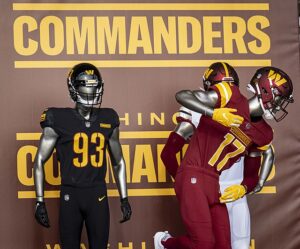 On Feb. 15, the legislation that would fund the construction of a $1 billion football stadium in Northern Virginia successfully passed through the state Senate. Introduced judicially by Senator Dick Saslaw (D), this venture was originally proposed by Governor Glenn Youngkin, who hopes to home the Washington Commanders west of the Potomac.

The bill, entitled SB 727, would authorize the sale of the $1 billion in government bonds as well as create the Virginia Football Stadium Authority, a board that would supervise the operation. However, rather than the Commonwealth’s taxpayers experiencing monetary pushback, the loan would be paid off by the stadium’s own tax revenue over a span of 30 years.

There have been mixed feelings surrounding the Commonwealth’s possible new addition, which could be completed as soon as 2027 or the same year as the Commanders’ contract with FedEx Field is set to expire.

For Mason students, the debate is similarly divided with some believing the development could bring about positive changes in the area, while others presume those changes will be negative.

Bontempo continued by touching upon the diversity within Northern Virginia, along with its subsequent variety of football team affiliations, asserting that “It would provide a more central hub for people interested in football”— a common denominator that could unify such a diverse community.

Nevertheless, the future of the economy has become the forefront of the debate with some skeptics requiring more information on the stadium’s location and job output to make a final decision. Sam Collier, a sophomore at Mason, elaborated on this viewpoint:

“The stadium—if built right—could create many jobs. On the flip side, if they don’t find the best place for the stadium, I feel like it could be a disaster.”

The precise site of the stadium is still up in the air with both Maryland and D.C. desiring the Commanders as well. But, if Virginia can acquire the deal, the general location would vastly decrease the commute for Washington Commanders’ fans in the vicinity.

Although the current stadium FedEx Field is near the Morgan Boulevard Metro station, the ride alone would take between an hour and a half and 30 minutes if one were to start at the Vienna/Fairfax-GMU station. The new stadium, on the other hand, has been rumored to be built near the final Ashburn Metro station; this new station is set to be finished by spring of this year, according to Loudoun County.

Mason student and Richmond native, Rebecca Robertson, expressed concerns due to the region’s already crowded community, contributing an outsider’s perspective on the matter.

“Being from a sort of smaller area, I dread coming up here because, unless you come around a non-peak time, you know you are going to hit traffic. There are just people everywhere, so having a high capacity arena would not only increase the foot traffic of people but also congestion on the roads.”

Despite the pros and cons of its construction, a new stadium would be the next step in the rebranding of the Washington Commanders. The lack of information, however, halts the public in coming to a firm conclusion on SB 727 and, until more is released, the fan base must await answers.

THE CASE FOR A LARGER PRAYER SPACE AT MASON