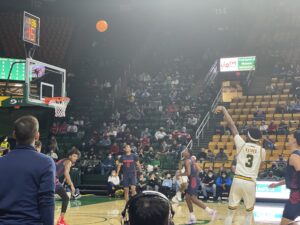 The Patriots returned to Eagle Bank Arena for the first time this year, following their game against American University, taking on Dayton on Jan 22 and Saint Joseph on Jan 24 — and winning both.

Thanks to their outstanding performance, the Patriots tallied a final score of 50-49 against Dayton. Graduate student D’Shawn Schwartz led the Patriots in scoring, with a total of 17 points. With his determination to lead the team, Schwartz had an agenda to secure the win.

“Obviously we don’t want them to get in the paint…don’t want to give them any threes when they got a decent look,” Schwartz said. “Just tried to contest that as best we could, it was a good shot by them but fortunately it didn’t go for them.”

The Hawks easily trailed the Patriots during the fourth quarter which almost triggered an upset. Due to the absence of key players, who were out due to injury, staying ahead of the Hawks in scoring became a struggle.

Juniors Josh Oduro and Xavier Johnson made their returns to Eagle Bank Arena this week. Oduro was back in action after suffering a lower leg injury during a practice before the George Washington game.

“It feels great to be out there with my teammates,” Oduro exclaimed. “I’ve been working a lot with our athletic trainer.”

Johnson, who suffered a lower leg injury during the week of January 17th, explained how he hopes to be fully recovered before the homecoming game against the VCU Rams.

With the Mason homecoming game weeks away, Coach English took advantage of this change in lineup to see what adjustments will be necessary moving forward. Setbacks such as these are what his players should be learning from, and serve as a reminder to focus on what’s truly important.

On Monday, Jan 24, the Mason Patriots defeated the Saint Joseph Hawks with a final score of 77-71, making it their second win at home. Coach English explained how he’s able to cope with players who have either been injured or absent from games.

“It’s something that you know going in,” English said. “Going into a season like this is kind of like being a coach in the NBA developmental league. Guys are in, guys are out, it’s not an excuse; your culture, your standard should be able to withstand anything.”

Coach English inherited this mindset as a way to keep the momentum and the goal of winning games, despite the absence of dominant players such as Johnson. Fortunately, this proved necessary for the victories against Dayton and Saint Josephs.

“We played against a team that was down two starters,” English said. “Whoever we have, you’re the next man up on this team. Foul trouble, absences, whatever. Our standards, what we value, our discipline, program structure should be able to withstand absences.”

View all posts by jstubbs4 →

MASON NEEDS TO CONSIDER WHO SPEAKS AT THE UNIVERSITY