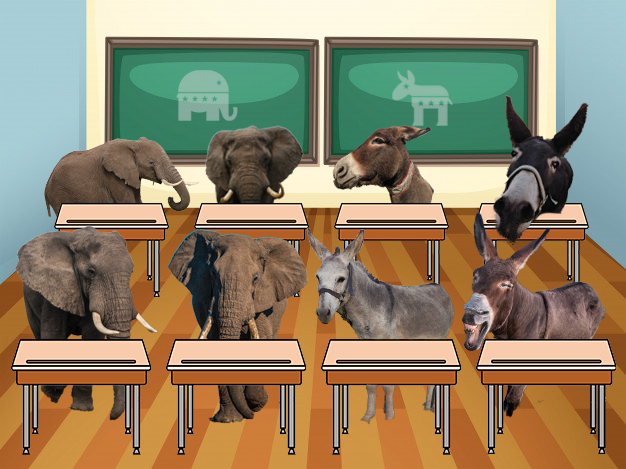 In an election cycle dominated by horse-race reporting and campaign ads, American political polarization has surged to the forefront. Though many believe the stakes are higher now than ever before, bitter polarization prior to an election is not a new phenomenon. Every four years, the American public divides itself down partisan lines and viciously attacks the opposing group.

The official Biden campaign front page features requests for financial contribution and the phrase “Battle for the Soul of the Nation.” Trump’s official campaign page asks for donations because “The Left is Threatening to Impeach President Trump.”

Problem solving, bipartisan collaboration, open-mindedness and critical thinking are not rewarded in American politics. Campaigns are based on simple answers and charisma.

Attacking education is popular on both sides of the aisle, with the right arguing that higher education has a heavy liberal bias and the left characterizing Trump voters as uneducated and ignorant.

In reality, American educational culture reinforces our flawed system far more fundamentally than mere partisan indoctrination. From a young age, we are taught to find the single answer. Rather than discussing reality, American schoolchildren are isolated in a simple, black and white world.

Social studies is not taught as the complex study of human society, but as an exercise in memorization. History tests ask for names, dates and definitions. Most students are not encouraged to ask critical questions about our nation’s past until at least high school, if at all.

Even AP courses, which claim to foster critical thinking, are teach-to-the-test. Ingenuity is often penalized, as the highest achieving students learn to write exactly what their teachers or the test graders want to hear — not unique thoughts and perspectives.

By the time students graduate, they have been effectively conditioned to expect answers and simplicity. Students best able to regurgitate information earn the highest scores, while creative students are sidelined to elective courses less valued by school boards and universities alike.

The American public is not comfortable with the complexity of nuanced topics such as legacy, history and racism. How can we expect the nation to engage in meaningful discussion when we do not teach this skill?

Rather than producing graduates capable of understanding the complexity of the world, the American education system shelters its students from sentience. The “best” graduates are programmed to abide comfortably within the confines of their environment, to accept authority without argument, and to search for decisive answers.

Our partisan political system is rooted in these ideas. Americans are conditioned to hear something that sounds like “the answer” and cling to it. Simplistic campaign taglines are not effective governing policies, but succeed in winning over voters who value black and white ideology.

In the absence of an electorate able to communicate in the face of disagreement or understand complex ideas, petty bickering and oversimplified taglines are all we can hope to see in the election cycle. The winner will not be the candidate best able to govern in a complex world, it will be the candidate best able to parrot a simple, enticing ideology.

The complexity of life is universal. The ability to cope with it in a productive, respectful way is essential. Until our education system embraces reality, we can expect elections to be determined by charisma and herd mentality — not the issues which actually matter for public policy.

View all posts by lswihar →