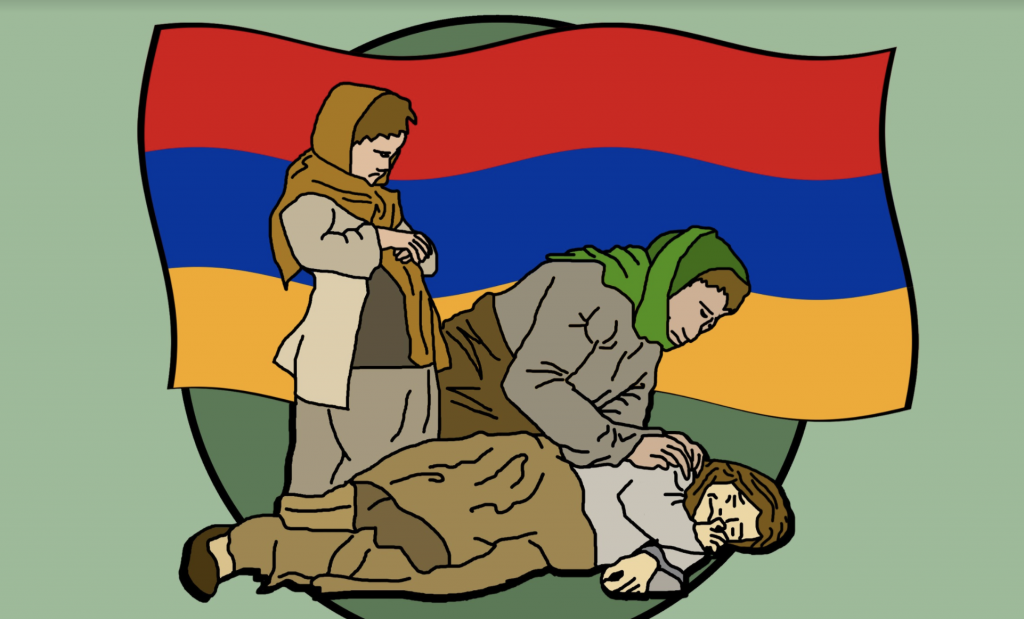 So what does this all mean? Why is it so important to me that I proclaim my past? Because my people were almost wiped out by genocide, and that genocide has been nearly forgotten.

The Armenian Genocide was considered to be the first genocide of modern history and even inspired aspects of Hitler’s Holocaust. Like Hitler’s vision of a homogeneous German empire, Enver Pasha — the leader of the Young Turks movement which took control of the Ottoman Empire — had a vision of a pure Turkish country with a homogeneous ethnic and religious population. But that supposed empire occupied lands held by the Christian Armenians for centuries before the Turks, so there was a so-called “Armenian problem” in his nationalist vision of a unified land of Turkish Muslims.

On April 24, 1915, Armenians living in the Ottoman Empire were rounded up during the chaos of World War I and sent on brutal death marches into the Syrian desert. 1.5 million Armenians were killed in this coordinated act of state-sponsored killings, in addition to hundreds of thousands of Christian Greeks, Assyrians, Chaldeans and other minorities. I exist today by the grace of God. My father’s grandfather had thankfully left his Armenian home for Racine, Wisconsin to follow his brother Hagop before the violence became intense. But shortly after my great-grandfather arrived, Hagop decided to travel back to his home village of Tomarza to work as an agent for the Armenian resistance.

Eventually, he was captured. After being forced to reveal the names of his fellow Armenian conspirators, he told them he had hidden the list on the roof of a tall church building. So he climbed to the top, only to reveal the list wasn’t there. He then threw himself off the roof so as to silence himself permanently in order to save his friends, but he only managed to smash his leg. He was recaptured and his foot was cut off after he was brutally tortured. This was, ironically, his salvation. He was transferred to a far-off prison to recover. Eventually he was set free for unknown reasons, only to return and find Tomarza completely desolate and abandoned.

I only know of this story because my great-grandfather had the wisdom to write it down. Because I don’t speak Armenian, I only was able to read his memoirs because they were translated into English on the 100th anniversary of the genocide. The story from my mother’s side is even less clear.

The story my mother told me from her grandmother was that as her family was fleeing to catch a boat to South America, they were stopped by a Turkish patrol. My great-grandmother had to witness the Turkish soldiers behead her father in front of her before the soldiers let her family go.

There are far more gruesome and sickening stories to be told, but I must leave you with one sincere request: Don’t forget the sufferings of my people. The American government failed to officially acknowledge the Armenian massacre as genocide for 104 years. But in October of 2019, the U.S. House of Representatives recognized it for the first time with an overwhelming margin of 405 to 11. Then in December of that year, the U.S. Senate recognized it unanimously.

This year marks the 105th anniversary of the genocide. Armenians are a proud and triumphant people. We were the first country to have Christianity as a state religion, we were never fully conquered by the Roman or Persian empire, we survived the communist dictatorship of the USSR, and we won the battle against Azerbaijan while out-gunned, out-funded and out-numbered. We will not vanish into the darkness. We will stand as a light of resilience to all.

Please, remember my people. Remember that we are still here, and our light will not go out.