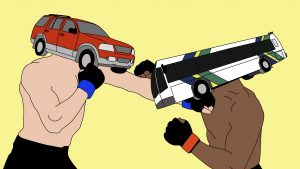 In the U.S., 36,750 people were killed in car accidents in 2018 according to Reuters. That’s after you get past the crumple zones, car-assisted auto-breaking and distracted driving safeguards that are nigh-ubiquitous in modern car design. Sixteen percent of those killed were pedestrians.

Does it really matter that much? Death is inevitable, and these are the prices we pay for the freedom of car ownership. Leave your house, get in your car, go wherever you want, whenever you want.

If you’re a commuter in the D.C. area, cars afford you the freedom of spending 82 hours a year stuck in traffic, according to ABC News. The national average for commuters is closer to 42 hours. That’s hardly the freedom to get up and go where we will.

Despite this, cars are so well-liked because they allow rapid less-structured transit in an environment that is familiar, comfortable and private, according to studies of driving habits in Sydney and London.

American drivers’ licenses are relatively easy to obtain, largely because our economy relies on cars. In truth, we need as many people to be able to drive as possible because driving is the primary mechanism for free movement across both short and long distances, so whether it be for vacation spending, long-distance work trips, commuting or local leisure, cars are a necessity. I argue they shouldn’t be.

First, bad drivers are killing what it means to drive. Cars have the potential to be fun and responsive — to zip, so to speak — and to push the driver toward understanding how they work and respond to road conditions. There is a joy in understanding one’s vehicle.

Instead, because of the drive for safer vehicles anyone can handle, what prevails on the road is the SUV: The modern land yacht, a banal, gas-guzzling, ridiculous class of vehicle that provides none of the advantages of a min-van, station wagon or a vehicle actually befitting the designation of “sport utility.”

More generally, the complicated electronics that exist in the internals of modern vehicles make them more difficult for amateur car enthusiasts to work on and increase the likelihood of costly visits to the mechanic.

Beyond necessity, it must be noted that in a sane society, the comfort and privacy of car transit ought to be treated entirely as mostly-optional privileges and not rights. Drive down Braddock Road behind an erratically-swerving Ford Explorer with cigarette smoke billowing from the driver’s window and tell me that the fact that driver is probably feeling nice is justification enough to allow them on the road.

Greater investment in public transit would be a good start to solving these problems — it eliminates the utilitarian element of car ownership for a good number of people, especially in densely-populated areas.

The change would not be immediate, but the more local bus routes run through suburbs, the more rail/bus networks span the American South, Midwest, and Southwest, the more affordable, subsidized alternatives there are to driving across town or across the country, the less appealing cars will become to broader swathes of the population.

The dropping appeal of cars would in turn allow for raised standards for receiving a license. Raising the stringency of driving tests would in turn improve people’s road performance overall, which would enable the raising of speed limits and thus allow a faster commute for those who choose to continue to drive for whatever reason. And finally, the American car market would be able to stop making generic SUVs and focusing on cars that are a joy to drive.