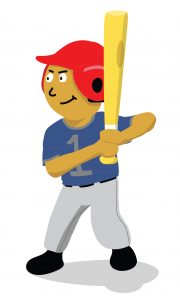 It’s a hot summer afternoon in mid-July. You step up to bat — your parents look eagerly from behind the fence. Next thing you know you’ve hit the ball. It’s flying. Right fielder runs — sprints — looking up into the summer sun. It lands in a sea of thorns and leaves just past the fence. You’re euphoric. After all your hard work, you’ve earned your very first home run.

Baseball is America’s game, often referred to as “our national pastime.” It’s a game where in the mid 20th century, a young, poor African-American could become one of America’s most well-known names — Jackie Robinson. It’s a game where even an underdog team with a 108-year World Series title drought can win one of the most sought-after titles in American sports — the Chicago Cubs. It’s a game that Mark Twain once described as ”the very symbol of the outward and visible expression of the drive and push and rush and struggle of the raging, tearing, booming 19th century.”

Baseball is emblematic of the stereotypical American culture and spirit: power of the underdog, freedom and growth for all persons, teamwork and the reward of hard work. Baseball historian Ronald Briley described baseball as “[an embodiment] of many of the values coming to dominate an urbanized and industrialized America.”

Our values — arguably the values of baseball — have driven America’s foreign policy.

During the Cold War, the U.S. focused on the containment of communism in favor of traditional capitalist ideals. The Truman Doctrine launched the U.S. into interventionism, destined to be a global leader advocating for American ideals around the world — ideals of hard work, freedom from tyranny and rights for all people.

Additionally, the U.S. has a controversial history of advocating regime change — assisting pro-democracy leaders in weaker states. Agree or disagree, we assisted underdogs in the pursuit against communism.

Foreign policy has become muddied these days. In 2019 President Trump announced what critics called a betrayal of our Kurdish allies in Syria, who have been a key partner in the fight against the Islamic State. Where has our value of teamwork gone?

In 2016 Trump justified Russia’s annexation of Crimea, saying, “You know, the people of Crimea, from what I’ve heard, would rather be with Russia than where they were.” Ukraine, which is improving its democratic institutions and aligning with the west, is still left behind by Trump in favor of Russia’s “fake democracy.” Where is our support for the underdog, our democratic, westernizing partners in the east?

President Trump can learn a thing or two from cultural historian Jacques Barzun, who said, “Whoever wants to know the heart and mind of America had better learn baseball.” It seems Trump and his foreign policy team have a bit of learning to do.

We should all take a note from James Earl Jones in “Field of Dreams,” “[America] has been erased like a blackboard, rebuilt and erased again. But baseball has marked the time. This field, this game: It’s a part of our past, Ray. It reminds us of all that once was good and that could be again.”

Our ideals, although on pause for now, will return to the international stage. Our foreign policy will realign with America’s classic values. For now, let’s learn a little bit about America from the stands of Nationals Park.