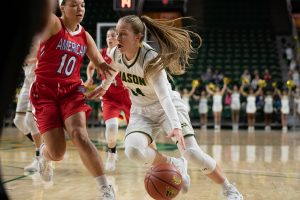 Mason improves to 3-1 after a 73-55 win over American. The Patriots were able to hold the Eagles to just 46 shot attempts.

Nicole Cardaño-Hillary stepped up in the second half

Nicole Cardaño-Hillary, the reigning Atlantic 10 Player of the Year, had six points in the first half, making just two of her five shots.

Cardaño-Hillary credited her success to her teammates and the team’s collective defense, saying, “I think that we definitely got better on defense, and we, as a team, feed off of that. And so I definitely feed off of that too. I mean my teammates were just getting involved where I needed it, you know, they were sealing when I needed it. I mean it’s just the whole team dynamic.”

In the second half, she went 7-12 and made both of her free throws to finish the night with 23 points, five rebounds and two assists.

How well Cardaño-Hillary plays will set the tone for her team’s success for the rest of the season.

After a difficult second quarter, the Patriots took a 30-29 lead into halftime. However, Mason outscored American 19-7 in the third quarter.

Head coach Nyla Milleson’s primary message at halftime was focusing on her team controlling their own actions. She said, “I thought [in the second quarter] it was us — mistakes, not necessarily anything that they were doing to us, you know, Nikki had two push-offs. We stepped on the baseline out of bounds a couple of times. And we had 13 turnovers, which is very uncharacteristic of this team this year.”

Continuing to make necessary adjustments will be very helpful to the team as the season progresses.

Mason was 8-14 from behind the arc, the team’s best shooting percentage since Feb. 10 against Fordham.

Milleson stated she did not believe that the team took a bad three-point shot.

Selecting the right shots to take will be critical as the season progresses, and being efficient will be helpful if other aspects of the game do not go as planned.

Mason Loses First Game of the Season to Top-Ten Maryland