Democratic primary candidate Andrew Yang held a rally at Mason’s Center for the Arts on Nov. 4. The two-hour rally featured speakers from Yang’s campaign as well as Mason students.

Yang is currently polling between one and three percent according to aggregate polling data from FiveThirtyEight.

Kara Kline, president of George Mason Democrats, spoke about the importance of voting in the Nov. 5 Virginia election: “Your vote counts, your vote is your voice; use it … It’s super, super important that y’all get out to vote tomorrow because it is going to set the tone for 2020.”

During his 30-minute speech, Yang talked at length about the importance of predicting and mitigating the automation of various sectors of the U.S. economy.

He used the example of a trucker, Fred the Felon, who was a fan of the campaign that went so far as to paint “Truckers for Yang” on the side of his truck.

“Fred is excited about the campaign because he realizes that we’re in the process of trying to automate his job and the jobs of 3.5 million truckers in this country … by equipping the trucks with 5G teleoperating equipment where, when the truck’s not sure what to do, a human operator will beam in from Nevada or Arizona and drive it like a videogame,” said Yang.

Yang further argued for the necessity of limiting corporate power, citing the fact that Amazon paid $0 in federal income taxes for 2018 and the decision to build Amazon’s HQ2 outside D.C.

He referred to Bezos’ accountants, saying, “Jeff goes into his vault, takes out bags of gold coins, gives them to each accountant; and then they go home and take a little Scrooge McDuck gold coin bath.” 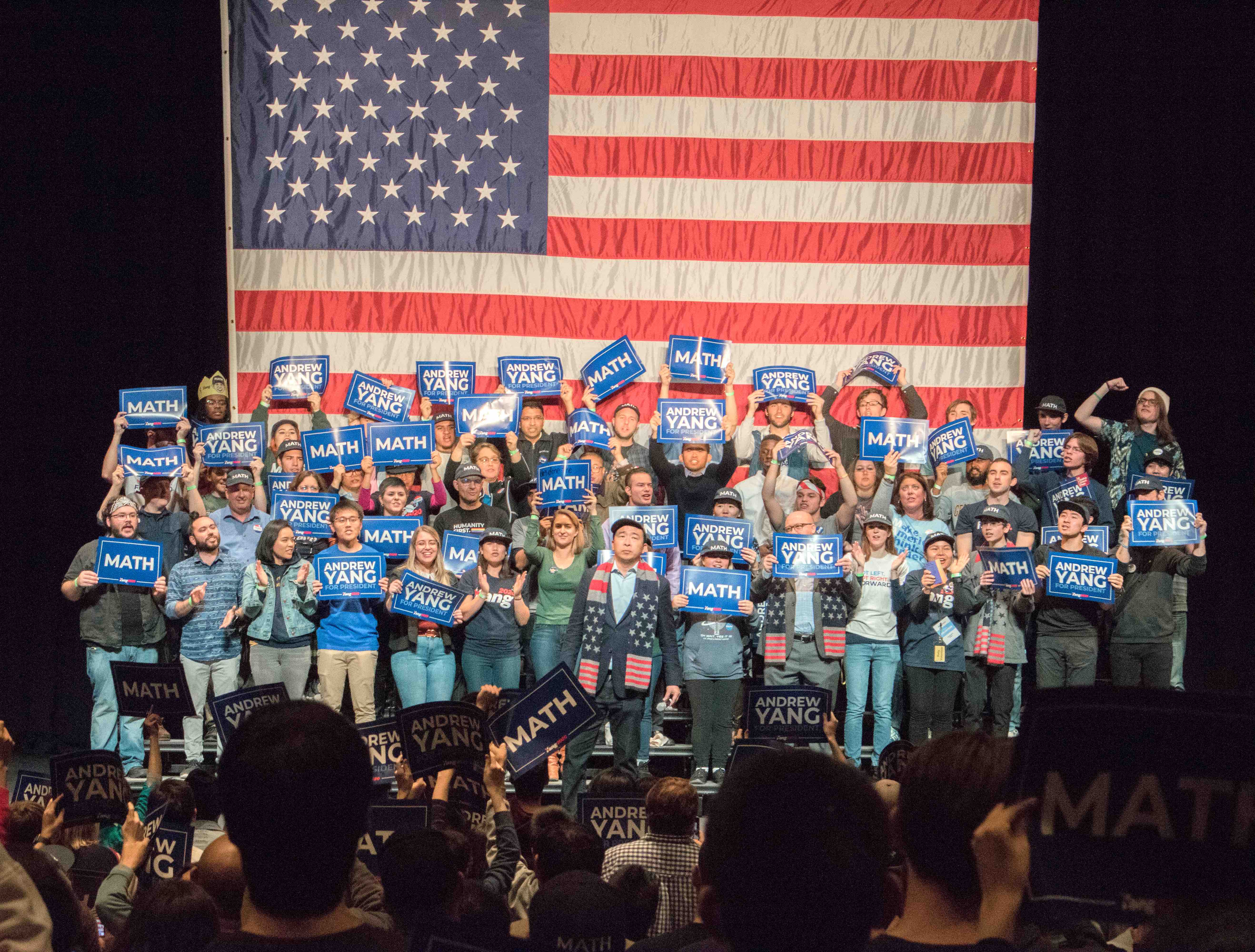 He also made a case for his plan for universal basic income (UBI), which he calls the Freedom Dividend.

“How much of [the money spent because of UBI] would stay where you live and work and go to school? … This is the trickle-up economy, Virginia. Your people, your families, and your communities-up. This is the opposite of the trickle-down garbage that’s been weakening us for years,” said Yang .

“The biggest [issue], undeniably, is universal basic income. Which, coming from a family when I was younger that was not necessarily poverty-stricken but also wasn’t on the right foot, universal basic income would’ve helped my family back then, and I know that there’s millions of families out there that it would help now. Even if it isn’t as extreme as he’s pushing, I still believe it is a policy that would help millions of people around the country,” said Farnsworth.

Madoc Kimball, a freshman at Mason and Andrew Yang Caucus Chair with the George Mason Democrats, explained how he got  involved: “Andrew Yang draws me for a lot of reasons. I come from a very politically active family; we — even though I couldn’t vote in 2016, me and my mother, we phone banked for Hillary, we did a lot of stuff. Because we have such a competitive primary — first and foremost I’m a Democrat and I wanna support who’ll beat Donald Trump.”

Kimball continued, “I think Andrew Yang is the best choice for that … one of the main reasons Andrew Yang succeeds so much as a candidate is because he’s bringing forward really persuasive policy and he shows how that will make a difference in American families.”

A Tale of Two Solidarities