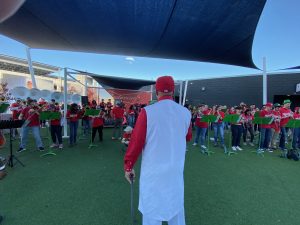 Mason’s pep band, Green Machine, played at Game 5 of the World Series in D.C. on Sunday, Oct. 27. The Nationals hosted the Houston Astros at Nationals Park, losing the game 7-1.

The Nationals ultimately won the World Series in Game 7, despite losing Game 5 to the Astros.

Arriving around 1 p.m., the band went through security for about 20 minutes. Security at the stadium was elevated due to President Trump’s attendance. According to sophomore Green Machine member and trumpet player Abbey Darcy, the band left their instruments on the ground as dogs came by to sniff the open cases. People then went through metal detectors after the instruments were checked.

“It wasn’t bad,” Darcy elaborated. “We were the only people there at that point in that particular area.”

Green Machine played for about three hours, taking two 15-minute breaks. They played their classic, go-to songs, but also changed things up a bit. “We got a couple of requests,” Darcy said. “I think someone requested ‘Stairway to Heaven,’ which we really hadn’t played before, so we played that for the first time there.”

Not only so, but Mason’s famous pep band played what could be considered the Nationals’ anthem throughout the postseason: “Baby Shark.” The song was first played in June as outfielder Gerardo Parra’s walk-up music, but became a trend — and rallying cry for fans and players alike — during the playoffs.

Even though “Baby Shark” is a fun song for fans to sing and dance along to, it got a bit exhausting for Green Machine to play, explained trumpet player Victoria Garrett; “‘Baby Shark’ isn’t my favorite song, because we played [it] so much, but it is funny to see everyone dance along while we play.” They played the song three times throughout their entire performance.

This is not the first time Green Machine has played at Nationals Park before. According to trumpet player Victoria Garrett, the pep band even played earlier this October at postseason game against the LA Dodgers. The group has rehearsal every Wednesday night, but did not specifically practice to play at the park on Sunday.

Although members of Green Machine did not watch the game, they enjoyed their time in the fan-christened District of Champions. “It was a surreal experience,” said Garrett. “I never would have imagined playing for the Nationals with a small group at first, then [two] more times because they enjoyed our first performance. We got to improvise and make the performance special and unique each time we played. All I can say about the win was that it was amazing watching and seeing the Nats get their first World Series win. Go Nats go!”

Families waiting for the game to start were dancing around to the music. The pep band got everyone excited — including themselves. “Everyone was super happy,” Darcy said. “Even the people in the band were energetic; we were dancing the entire time.”

Garrett and other members of Green Machine have just one message for Mason students: “Come see the Green Machine play at Eagle Bank Arena at basketball games,” Garrett said.