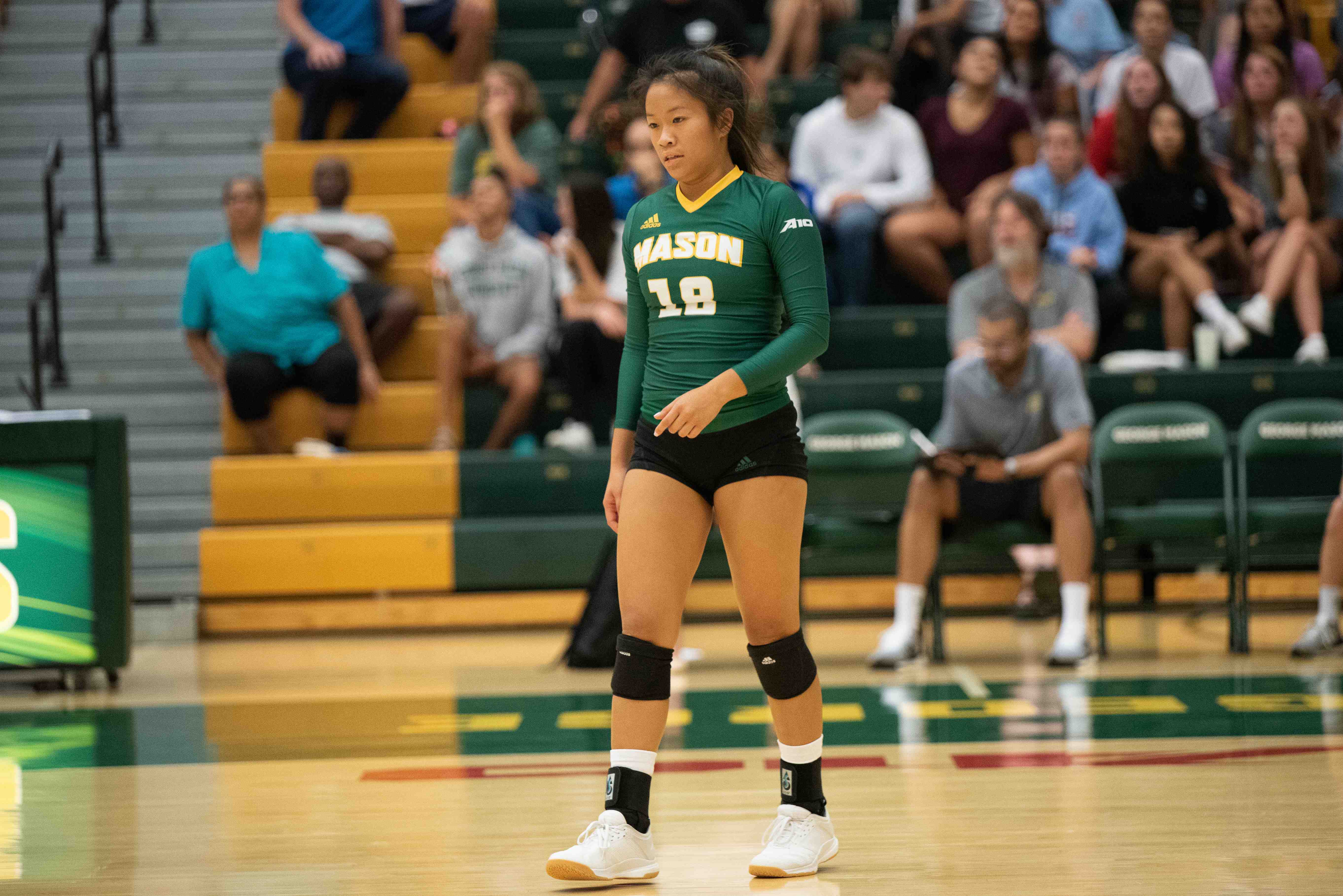 Filling the shoes of one of Mason Women’s Volleyball’s greatest players would seem daunting to a starting freshman.

But not for Stephanie Der.

After being “born into a family who basically lived and breathed volleyball,” Der picked up the sport of volleyball at age 10. This was due in part to her sister who started playing at a young age as well. “I would go watch her games and we would like to go outside and pass with her, my dad, and my mom,” Der said.

It was also her sister who served as Der’s role model growing up. “She really pushed me to be the best I could in life and in volleyball,” Der said. “I always looked up to her. I always follow the course that she did and I was like, ‘Oh, I want to be more like her.’”

It was also because of her connection to her Chinese heritage that she chose her number, 18. “I was born on the 28th, but the 28 is kind of a big number. And also in Chinese culture, eight is a lucky number. So throughout my whole entire family, we have this whole thing of having either number eight or 18. So I choose 18.”

This was not the only connection between Der’s volleyball career and her family. While attending Chantilly High School, her mom pushed her to look at Mason as an option. “Surprisingly enough … I wasn’t sure if I wanted to come, [but] my mom went here. So she was like, ‘Oh, I think you should check it out, you never know.’ And so I came here, and when I walked into the gym and I met the rest of the team, it just felt normal,” Der said.

The start of Der’s Mason journey actually started with head coach Aylene Ilkson recruiting another player (and now teammate), Siron Hardy. “They were playing against each other,” said Ilkson. “And on her high school team, she really stood out … She made this play on coverage that was really smart and really fast. And I was like, ‘Okay, I’m going to need to find out who that is.”

Der made dig after dig in this match, which prompted Ilkson to think, “Oh, my god, who is this kid?”

Ilkson adored Der’s speed, her ability to read the court, and her ability to play as an all-around player. “She was exactly what we were looking for,” Ilkson said. 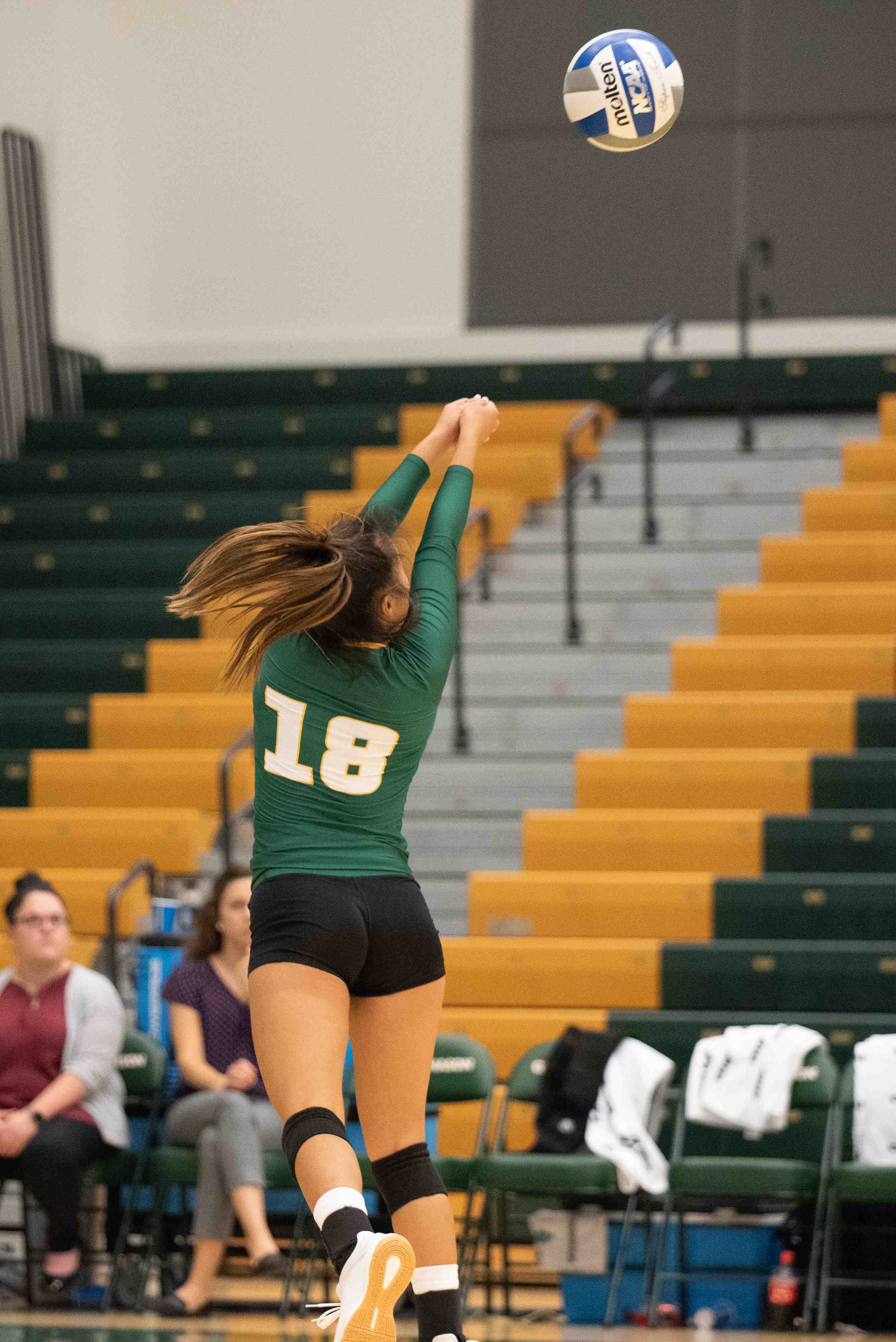 Despite her booming presence on the court Ilkson said that she initially came off as quiet and reserved. “[When] we started preseason she was that way and I now can see every time we play it gets more and more to the Steph I recruited, which is awesome. [That’s] what we’re looking for in a libero that has large, large shoes to fill because Catie Espinoza was so chatty and entertaining. And so I think you know, it’s funny the evolution of how Steph has come along even just in this quick amount of weeks.”

Filing the shoes of the all-time leading digs leader in Mason Volleyball history, but Ilkson thinks she found the right libero to do it.

“They’re so different in how they play and how they see the game,” Ilkson said. “And obviously, Catie wasn’t Catie overnight, she came in and she didn’t even start as a libero her freshman year. But honestly, I’m excited for Steph to come into her own and kind of make a mark on the program the way she can.”

“ I think she brings a little different energy, she’s really calm,” she added. “She’s really put together all the time. And I think that is something that our team can really utilize. And it’s really good for us, Catie was so she was all the energy all the time. And that was helpful for a younger team like we had last year. And so now I think, Steph is finding her own way to make her mark and make her relationships with her teammates kind of in her own way.”

After the Puerto Rico Clásico trip was cancelled due to Hurricane Dorian, Der finally made her collegiate debut at home.

The PA announcer introduced her: “A freshman libero from Chantilly, Virginia … Stephanie Der.” It was followed up by thundering applause.

Living in the Northern Virginia area allowed for most of Der’s family to come to her games and tournaments in high school. “My parents would come to all my club games and one of my aunts and my grandma would come to most of them,” said Der. “[So] just having all those people [there for] me it felt like home … I had my high school team there supporting me. So I’m really grateful for all the people that come and support me.”

Der also expressed some of her emotions leading up to her first couple games. “I was nervous, but I think I’m starting to get used to the pace and like the whole environment. [It] was definitely easier having all my teammates support me and [tell] me, ‘You can do it, you can play at this level.’”

The freshman is looking forward to the rest of her first year with the Women’s Volleyball team and improving her and her teammates’ game as well.

But most of all Der is hoping to do something that Mason Women’s Volleyball has never done before: win the Atlantic 10 Championship.

As Der starts to take over the libero position, she will be off and filling those large shoes in no time.