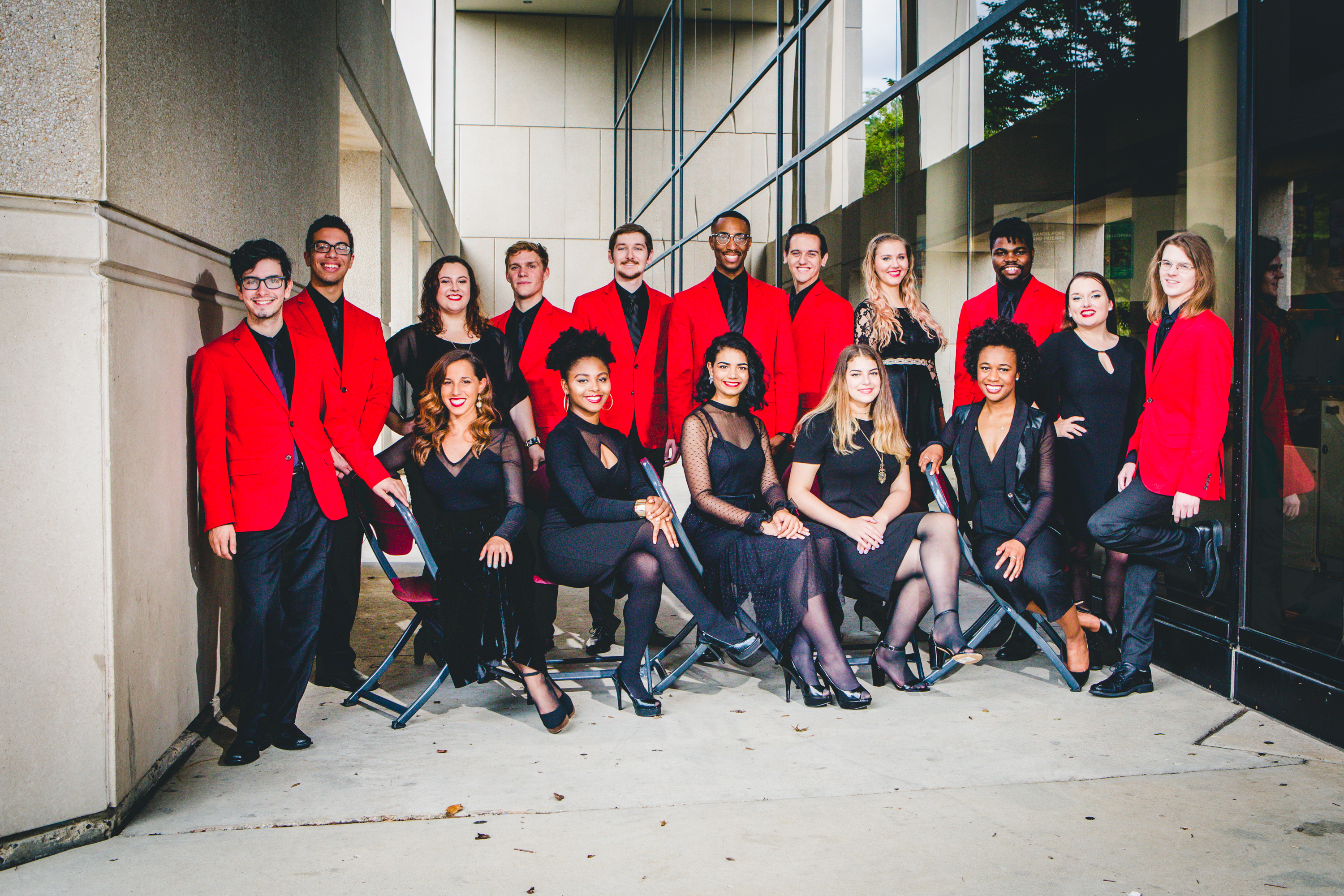 From Duke Ellington to Sara Bareilles, the Mason Jazz Vocal Ensemble played tunes from all eras of jazz at their Mason Jazz Vocal Night concert. The event was held on Wednesday, Nov. 28, at 8 p.m. in the Center for the Arts, where the group performed songs including “I’m A Fool to Want You,” recorded by Frank Sinatra, “Muddy Water,” sung by Aretha Franklin and “Don’t You Worry ‘Bout a Thing,” written and performed by Stevie Wonder.

The ensemble worked long and hard to make sure that the concert was a success, putting in hours of rehearsal three days a week throughout the semester to sound as perfect as possible.

“We’re told-slash-encouraged to practice as if we were performing,” junior music education major Courtney Jennelle said. “Using all that energy and especially through all of these weeks, we’re pretty pooped. That’s sort of obvious. In the end though, that outcome is just so rewarding [with] seeing all of the people’s faces bright up (sic) in the audience.”

This is Jennelle’s first semester in the ensemble. After being encouraged to join in August by one of the members of the group who majors in jazz studies, Jennelle auditioned earlier this semester using a song from the popular television show “Steven Universe” and was offered a place within the group soon after.

“I honestly am really glad I didn’t turn down the audition,” she stated about her experience in the group. “It was a big impact this semester and probably [will continue to be] throughout my college career at Mason.”

An important aspect of the ensemble is the director, Darden Purcell. Having recorded with artists like Chaka Khan and performed in spaces from the Kennedy Center to the set of “The Late Show with David Letterman,” Purcell is a lauded jazz vocalist who has performed for audiences all over the world.

“She is so caring about her students,” Jennelle stated. “Studio, soloists and also MJVE [Mason Jazz Vocal Ensemble] or just anyone that is a part of this school.”

Jennelle continued, “She’s been a delight, and even outside of class … she’s very much there for her students. Teachers like that kind of encourage me to do better. Teachers that get in touch with their students in that way kind of make me want to come back to classes, or come back to school.”

The concert also included a special guest appearance from Herndon High School’s Vocal Jazz performers, who performed tunes such as “Dance of the Sugar Plum Fairy,” arranged by Pentatonix.

“I remember attending Vocal Jazz Night back in fall 2015 or something, and this Vocal Jazz Night might have been one of the most, quote [unquote], ‘lit’ performances that I have ever seen,” Jennelle stated. “There was a lot of energy through the ballads from the soloists and also from Herndon High School[’s performance].”

The Mason Jazz Vocal Ensemble will hold auditions next spring for new members who can boogie with the group. The process is open to anyone interested, so make sure to keep an eye out if you wish to start scatting songs all around Mason.

Four Fun Things to Do in NOVA