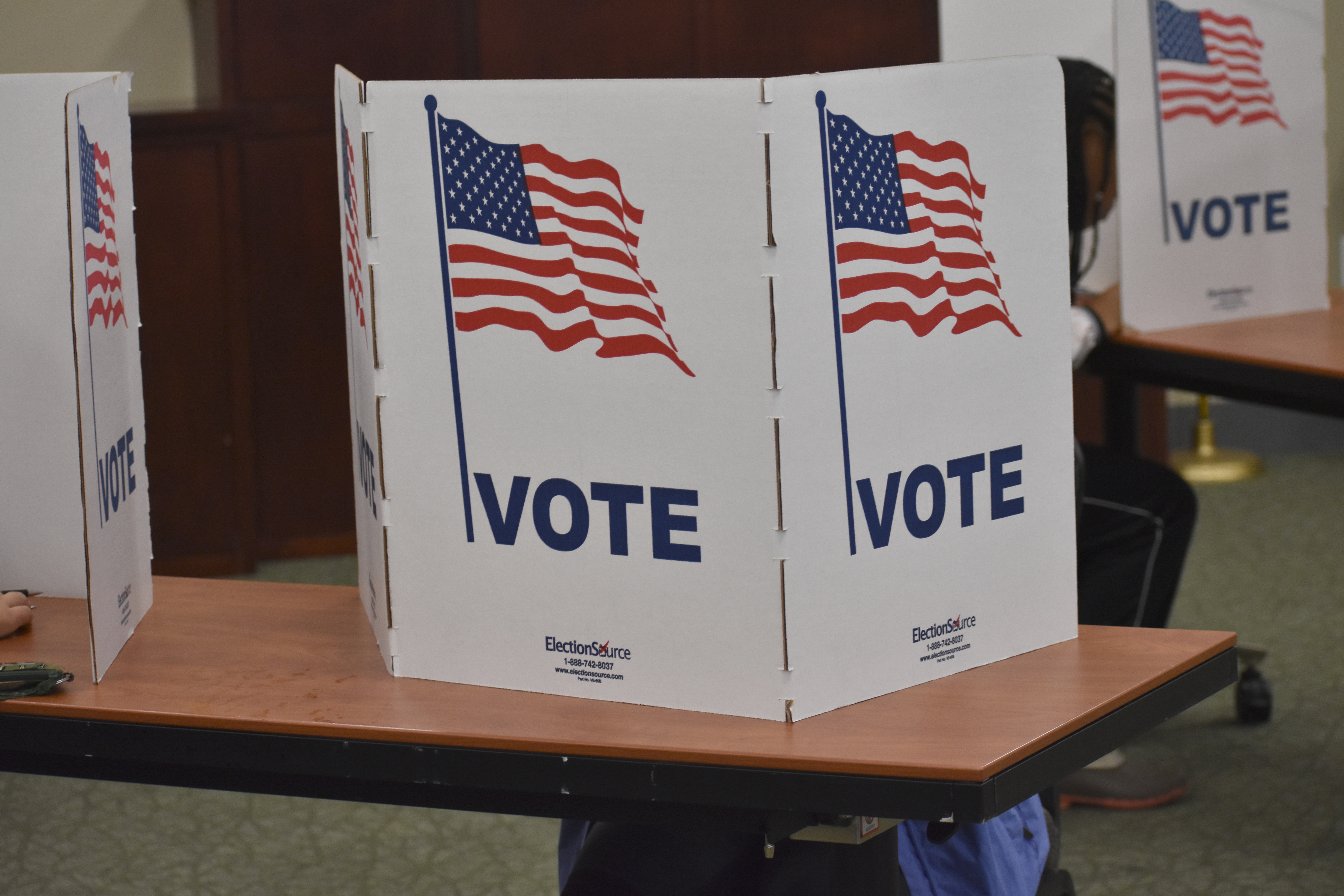 Democrats swing House in the most well-attended vote in decades

The Democratic party has gained a majority in the House of Representatives following what is estimated to be the highest voter turnout since 1966, according to NBC News. The Republican majority was maintained in the Senate.

Many Mason students and faculty voted at the Mason precinct, located in Merten Hall. Campaign signs, primarily for Sen. Tim Kaine, lined the way there.

Several student organizations including Student Media, Student Government, George Mason Democrats (GMU Dems) and George Mason College Republicans (CRs) were set up outside Merten Hall. In total, the precinct saw nearly 1,700 votes cast by the time the polls closed, according to the Virginia Department of Elections.

Kaine, who was re-elected to serve in the Senate, received 86.4 percent of votes at the university precinct. Stewart received 10.35% of the votes.

These numbers differ significantly from Kaine and Stewart’s performances in Virginia overall, where Kaine received 56 percent of votes and Stewart received 41 percent.

Likewise, while Connolly won his seat in the 11th District with 71 percent of votes, he received 83 percent of the votes at the university precinct.

Aside from congressional candidates, the ballot also included two constitutional amendments, as well as spending on public safety bonds for Fairfax County.

The amendments both had to do with tax exemptions, one for property prone to flooding and another regarding the benefits spouses of veterans can receive after moving to a different primary residence. 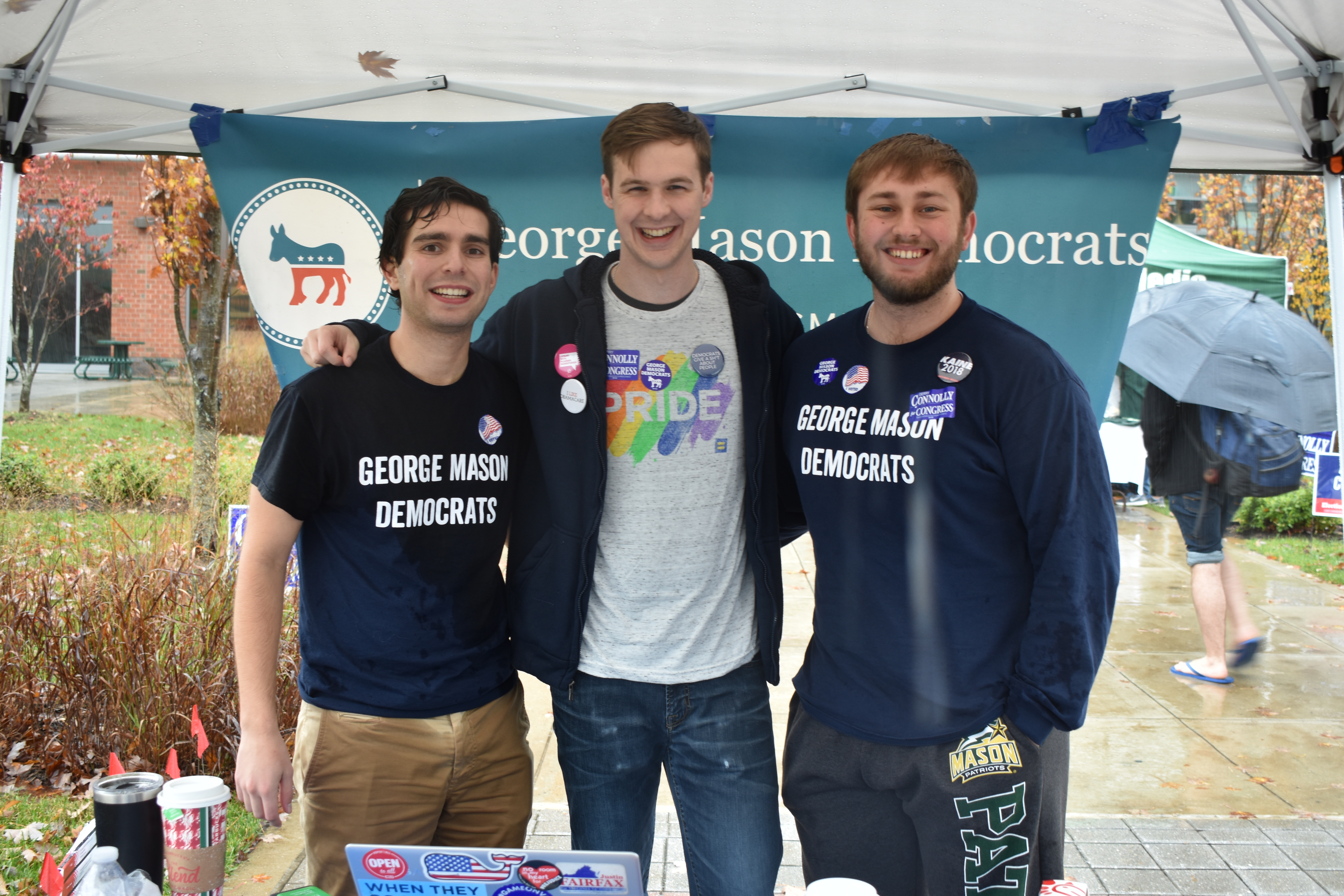 Both GMU Dems and CRs passed out sample ballots that urged voters to vote “yes” on the amendments. Both amendments were passed in the election.

Spending on public safety bonds was endorsed by GMU Dems, but not by CRs. The question still received a “yes” in Fairfax County.

The neighboring 10th Congressional District includes Loudoun and parts of Fairfax and Prince William Counties. Its incumbent, Barbara Comstock (R), lost to Jennifer Wexton (D) by approximately 45,000 votes. Wexton received 56.09 percent of votes, according to the Virginia Department of Elections.

“The Virginia 10th … we’re really hoping that that seat flips, because that will be the last red seat to go blue in Northern Virginia, which is what we’re waiting for,” said Camden Layton, GMU Dems’ chief of staff.

Students shared their primary reasons for voting, focusing largely on the prospect of a possible party shift in the House of Representatives.

Malik Wyatt, a sophomore studying computer science, stated, “I voted Democratic … I really like Tim Kaine … Personally, I feel like voting [in] this election was important because there were a lot of things in the House right now that were set in stone by Republicans, and if we can get the Democratic party in the House and veto a lot of these things.”

Grant Stewart, a freshman studying cyber security, said, “I don’t believe in higher taxes to people who make more money … that’s probably my primary reason for voting Republican … Right now, maintaining majority of the House [is important] if we want to get things done.”

“What’s important to me when I vote is just making sure that everyone is taken care of,”

said Rachel Stephenson, a first-year master’s psychology student about her philosophy in regard to voting. “I think everyone has rights, and I want to make sure that everyone gets their rights.”

Certain students experienced trouble casting votes. Emily Beck, a junior and business management major who had registered to vote at Mason, was told that her registration was changed to another address.

“I had registered with my campus address … I went online, and it’s now showing that my polling place is in Sterling instead of Fairfax … I now have to walk 15 minutes through the rain to my car and drive 45 minutes [to my polling station,]” Beck stated. She said that she was still planning to vote despite this setback.

Country-wide, Democrats have gained significant ground in the House of Representatives, going from 194 seats to 225 seats as of Friday morning. This gives the party a majority of 51.7 percent, according to the Associated Press.

Not all elections were concluded directly following the election. A recount was triggered in Florida because of a particularly close margin between Republican candidate Rick Scott and Democratic candidate Bill Nelson, both running for Senate.

President Trump has expressed skepticism at the recount, tweeting, “Law Enforcement is looking into another big corruption scandal having to do with Election Fraud in #Broward and Palm Beach. Florida voted for Rick Scott!”

Also of note is the close senate race in Arizona, which shifted from a plurality for Republican candidate Martha McSally to a plurality of 49.1 percent for Democratic candidate Kyrsten Sinema as districts continued reporting. As of Friday morning, Sinema led by a mere 9,000 votes, according to CNN. The race is meant to fill the vacancy left by retiring Arizona Senator Jeff Flake.