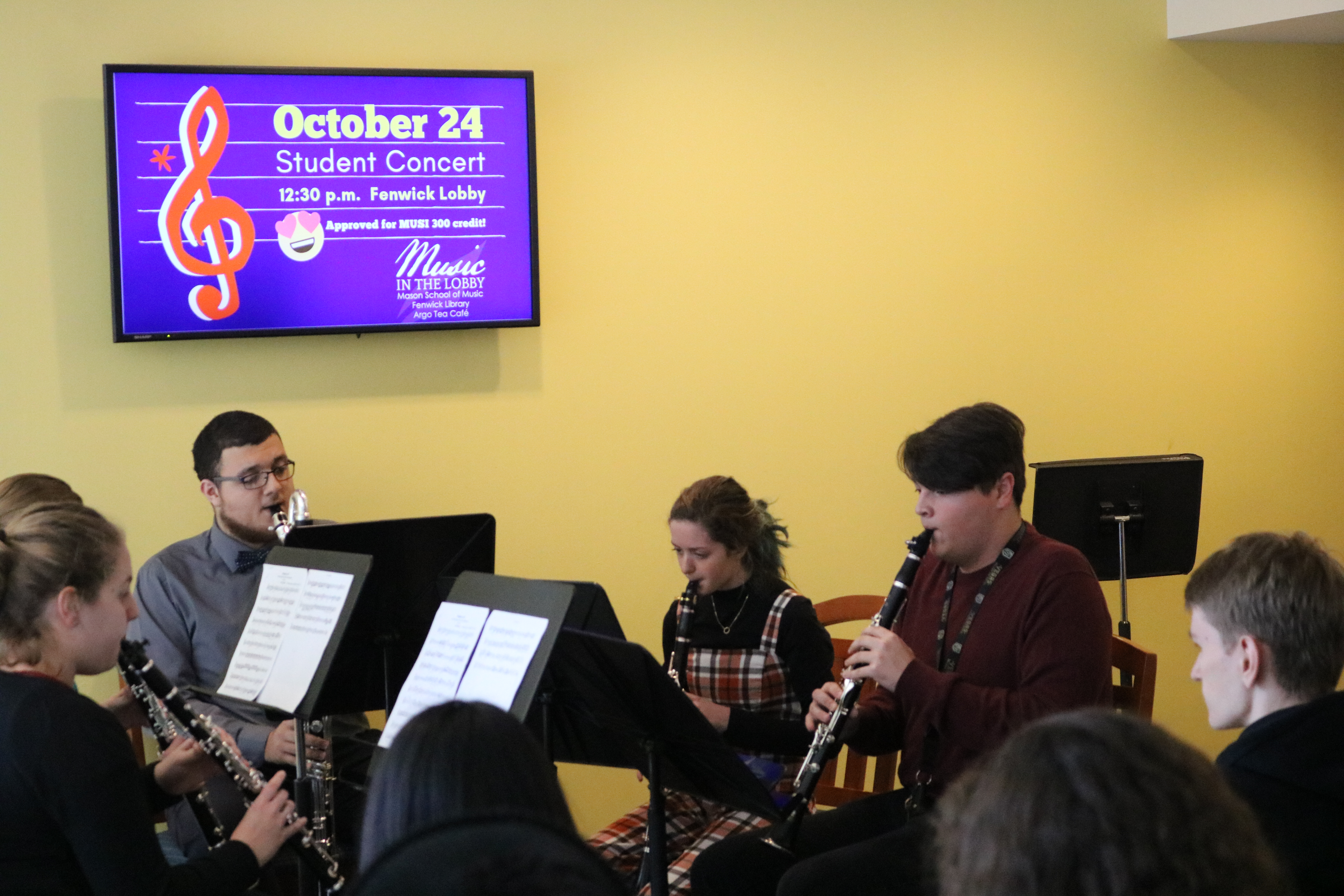 At Music in the Lobby, students have no treble playing Mozart, Brahms and more

On Wednesday, Oct. 24, Mason held its second Music in the Lobby this semester in a partnership between the School of Music, Fenwick Library and Argo Tea.

The events showcase the talent that is contained within the school’s music program, having students perform five or six pieces for the pleasure of the audience’s listening ears. They have been occurring for a little over two and a half years.

“Formerly, the music collection was … over by Gateway Library,” said Steve Gerber, the coordinator of the event. The collection houses most of Mason’s music including scores, books and recordings. Eventually it was decided that a better home for the music would be in Fenwick, where it had been kept years below.

In March of 2016, Gerber decided to host a grand opening of the collections in their new home, including live performances. However, this was a challenge, as there could be none of this in a library where quiet was key.

“I got the OK to do something in the outer lobby,” Gerber said. “So, for our grand opening we had like a trad jazz ensemble,” a type of style that is traditional, often including a clarinet, trombone and trumpet instead of a saxophone.

Gerber considered that first event highly successful. “It was a great little concert,” Gerber said. “Other librarians and music people thought this was such a great idea we should keep doing it, have more concerts in there.”

Ever since, all of the small concerts have taken place within the Fenwick lobby, where both music lovers seated front row and stressed-out scholars headed for a study session can best hear the pieces. They are performed right next to the entrance to the first floor of the library.

The event could not happen without the partnership that has been formed to make the event a success. Argo Tea provides refreshments, allowing students to chew delicious cookies and sip the best tea around as they listen to the music performed around them. June Huang, the director of strings, coordinates the student performers who will be playing at Music in the Lobby.

“[Huang] puts together the program,” Gerber said. “As director of strings, she knows what all the string ensembles are.”

The events and the impact it has on the Mason community are considered to be positive, based on how many people always manage to watch the performances. “Because of the informality of it, we can see there’s a certain number of people coming and going,” Gerber said. “There’s always a crowd standing there.”

However, in the future, Gerber hopes to get more and more ensembles involved, including brass and guitar. “There are guitar trios and quartets,” he said. “It would be nice to have a guitar trio or quartet in there.”

The next Music in the Lobby will be held on Nov. 28, with concerts following in the spring semester.