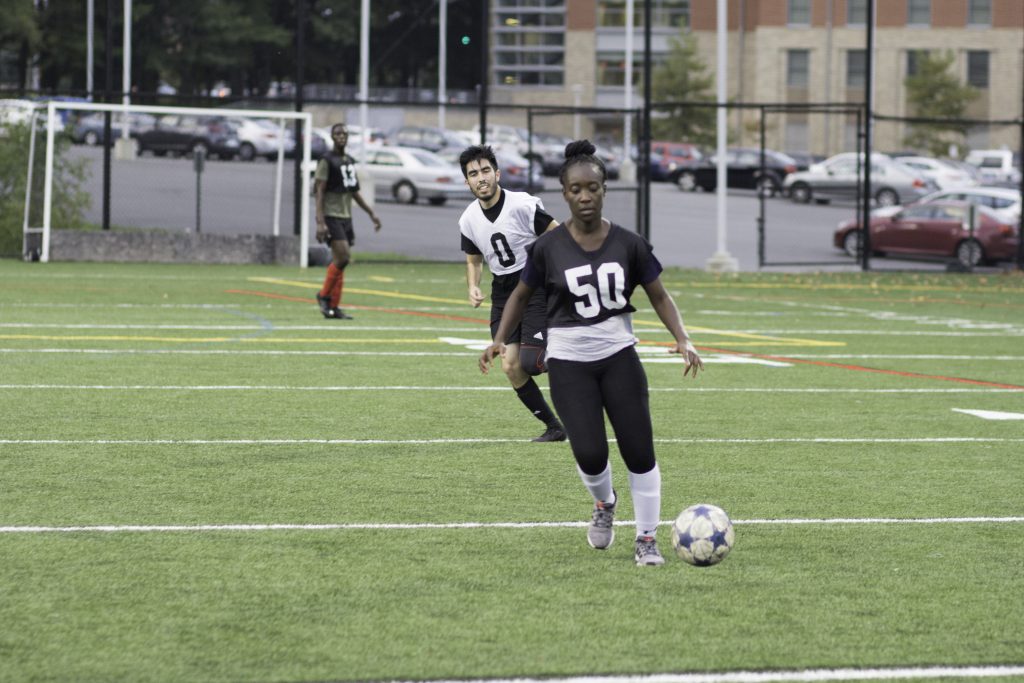 Rules Regarding Gender in Sports Lead to Player Concerns

Intramural sports have always been an easy and accessible way for students to remain active and compete in college. However, some of the rules in co-ed intramural sports may not be all fun and games.

The rules for these games are typically very similar to the traditional rules of the sport being played. Examples of intramural sports at Mason are 7 v 7 soccer, 5 v 5 basketball, slow pitch softball and 7 v 7 flag football. But when men and women are on the field at the same time, some of these rules change.

To start, there are rules about how many players of each gender can be on the field at a time.

“A regulation team consists of 7 players (one of which is the goalkeeper),” according to the Mason Recreation website for soccer. A team may start with a minimum of 5 players. There must be at least 2 females and 3 males within that 5. The team must have a minimum of 2 females in the field of play at all times. A female goalie does not count towards the minimum requirement.”

This is a disadvantage since teams that cannot provide this ratio of players are required to forfeit. According to the Mason Recreation website, these rules exist for every co-ed sport.

Mason Recreation also says that in softball men and women must also alternate in the batting order. This means there cannot be back-to-back women or back-to-back men at-bat.

For example, if a male walks, then the female player that bats after him can choose to hit or walk. Regardless of whether or not the woman chooses to hit, the man at that point will advance to second base.

This does not work in reverse though.

Suppose John walks. Sally can then choose to hit or to walk, and even if she hits, John will go to second base. But in reverse, the rules change. Suppose Sally walks. John does not have the option to hit or walk, and Sally does not get to advance to second base regardless of his decision. This walking rule presents the idea that Sally cannot hit the ball as well as John, so Sally doesn’t need to try.

Another important style of rules throughout intramural co-ed sports is a “bonus point”. The 5 v 5 basketball rules on the Mason Recreation website state, “Female scores will be awarded an additional bonus point (any basket made inside the arc will be worth 3 points and any basket made outside of the arc will be worth 4 points).” Similarly, in soccer, if a goal is scored by a woman it is worth two points instead of one point.

“We made the change to become more inclusive and not have any gender differences when it comes to how the game was played,” said Drew Devore Coordinator of Flag Football and Basketball.

Although the rules are changing to better reflect gender equality on the field, some rules still have yet to be reviewed. Co-ed soccer still has a rule about the “bonus point” as of this semester.

When intramural soccer player, Lauren Tlapa, was asked about how these rules affected her as a player, she said, “It makes me feel less important, and I know that that’s kinda contradictory, because you would think that it would make you feel more important because you get to score more points … It looks at you less as a competitor and more as a means to an end.”

These rules are not a problem of Mason in particular. According to Paul J. Bazzano III Assistant Director of Competitive Sports, the rules stem from National Intramural Recreation Sports Association (NIRSA) and National Federation of State High School Associations.

Yet, just because these rules are not just Mason-specific, it does not mean that they cannot be changed. According to Bazzano, schools are allowed to make amendments to these rules.

As of now, no visible progress has been made in amending the intramural rules.