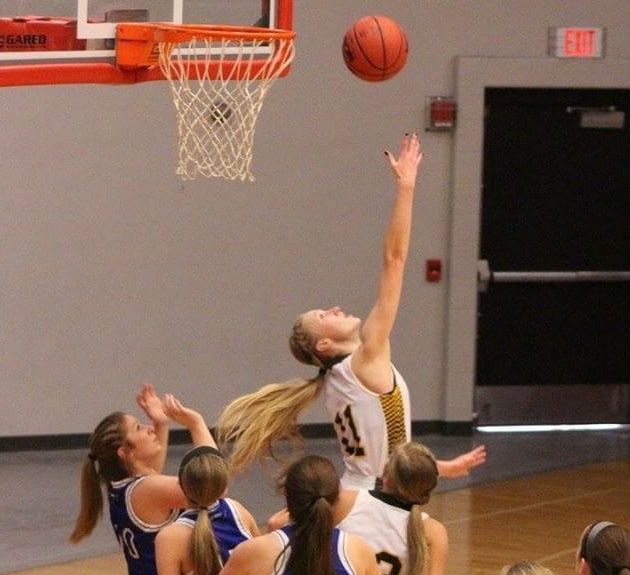 It’s an hour south down Byway 69 from Kansas City, to Jacy Bolton’s home, a small town on the border of Missouri and Kansas by the name of Drexel, Missouri. This town is home to only about 1000 people and is less than three square miles.

Playing at Drexel High School, Bolton soon learned to lead a team, captaining the women’s basketball team for her entire four-year career. It did not take long to excel on the court either as Bolton left the school as the all-time leader in scoring (2,150 points), rebounding (1,174), steals (452) and free throws made (506).

Growing up in rural Missouri did not stop her from dreaming about becoming a Division I basketball player. Looking for inspiration growing up, she found Morgan Eye, “[S]he grew up in a small town just like I did and ended up playing [women’s basketball] at Mizzou [University of Missouri] and I just think that for me to see a small town girl go and play DI in college, I’d say she has impacted me so much,” said Bolton.  “I like small town stories because that’s what I am.”

Coming from the 400 person town of Montrose, Missouri, Eye ended up as a key player at the University of Missouri. During her time at Mizzou, Eye was best known for her three-point shooting.

After searching for a Division I school to call home, Bolton elected to come to Mason in 2016. Bolton started every game she played in during her first two years at Mason and last season helped her team record the best season in program history. She currently has recorded 193 field goals, 68 three-pointers and 101 free-throws, totaling almost 700 points. 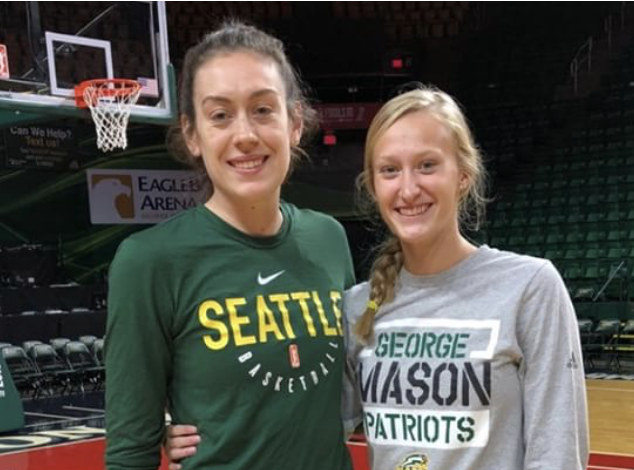 While Morgan Eye had the greater impact on her career, Bolton holds current WNBA Champion and League MVP, Breanna Stewart as another source of inspiration for her on and off the court. “I’ve watched Breanna Stewart since she was at UConn,” said Bolton.

When the Washington Mystics announced that they would play their home games of the WNBA Finals at Mason’s own EagleBank Arena, Bolton stated that the women’s basketball team were ecstatic to hear the news, saying, “On our group chat we were all like, ‘When are we gonna go? It’s going to be so cool.’ And I think the biggest thing that meant to all of us was just … to be able to see their game, and to see… the difference between the WNBA and the college level.”

On the day of the game the Washington Mystics and the Seattle Storm held their shoot-arounds in the morning. The Mason women’s basketball team had a chance to meet some of the players, including one of Bolton’s role models, the WNBA’s Most Valuable Player, Breanna Stewart.

Bolton stated that while some sports stars look to fans as a nuisance, she described Stewart saying, “My favorite thing about her was that she was a good person on top of being an amazing basketball player.” Bolton continued, saying that, “I think I try to [model myself around Stewart] in ways of how she lets her basketball game do the talking… she’s very composed on the court.”

When gametime rolled around, Bolton sat with her teammates and watched the two teams battle it out. Bolton said that, “One cool thing I told my dad was that I was able to see Sue Bird in person. Just to watch her game, she was always a danger around the hoop.” Bird another standout player for the Storm, is now a three-time WNBA Champion and a four-time Olympic gold medalist.

As Stewart and the Seattle Storm raised the championship trophy over their heads, Bolton reflected saying, “I know that feeling, back in highschool, and in that moment you have so many emotions, but the biggest emotion I always felt was complete relief. You just know that everything that you’ve done, every extra workout, every weight session and every morning when you’re exhausted, you know that in that moment, you’re like “finally” and I hope that we get there this year.”

Even though the WNBA Finals have come and gone, Bolton will definitely remember the experience she had meeting basketball superstar Breanna Stewart and seeing how the WNBA players differ from college athletes when performing on the court.

While she might be a small town girl, the impact of playing basketball in rural Drexel, Missouri and making it to Division I, will remain a large part of her even after she finishes her career in the green and gold.