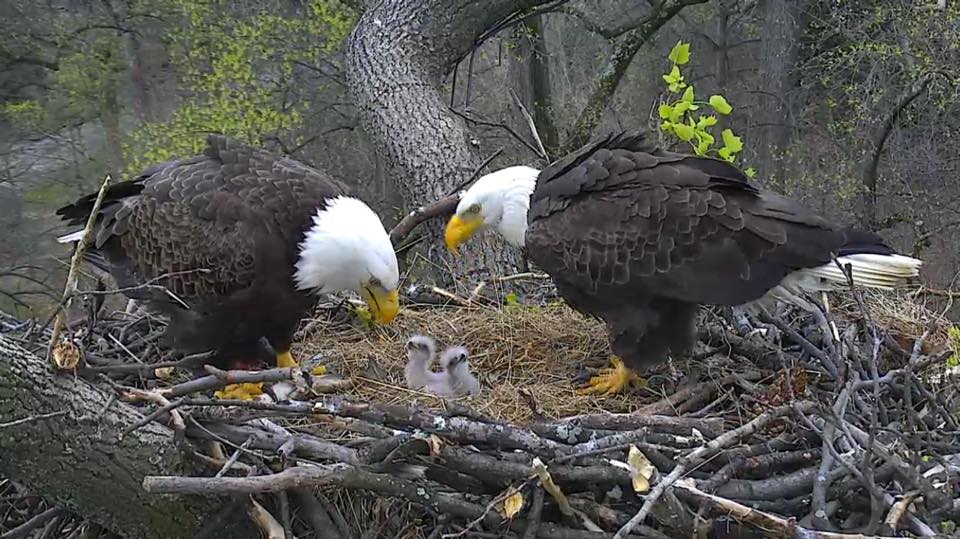 Eagles can now grace the screen of your smartphone or laptop via the eagle nest cams at the U.S. National Arboretum in Washington, D.C.

Sponsored by the American Eagle Foundation, the USNA has two video cameras perched by the nest of two mated bald eagles, Mr. President and The First Lady. Nesting atop a tulip poplar tree, they are the first pair to nest at the Arboretum since 1947.

In February, The First Lady laid two eggs, which hatched March 18 and 20. Word about the eggs was spread via social media with the hashtag #DCEaglecam, prompting Americans all over the country to tune in for a glimpse of the new babies.

According to a press release, USNA and AEF staff installed two HD video cameras near last year’s nest. Setting up the camera involved installing a half mile of fiber optic cable powered by a large solar array, designed and built by students and staff at Alfred State College, associated with SUNY College of Technology.

The cameras protect the eagle pair by minimizing disturbances from visitors. Nearby people, noise and other distractions can cause the eagles to abandon the nest and eggs, the press release said.

The FAQ on the website explains why the cameras have no sound. Staff installed a microphone at the same time as the cameras, but it stopped working, and the eagles came back to the nesting area before repairs could be made. In order not to change or disturb their natural process, there will not be sound on this cam until the next mating season.

Viewers can see The First Lady feeding and taking care of the babies, which are currently referred to as D2 and D3.

“It’s a cool opportunity to see a rare species up close. I like how it’s a family cam, you can watch the whole family,” senior communications major Jeramey Kwan said.

Mr. President and The First Lady successfully raised one eaglet in 2015.

“I think it’s very cute to see the mom and dad eagles taking care of their babies. It’s a great educational resource for people who want to learn about eagles,” junior communications major Shannon Foremaster said. “I watch the cam on my phone when I’m taking a break from homework.”

The First Lady feeds the eaglets fish and small mammals, such as squirrels and rabbits. Eagles are opportunistic eaters. Feeding times are easy to watch, as the eaglets are fed frequently.

Viewers may often notice one of the parents sitting on the eaglets. They do this to keep the eaglets warm.

The nest that the eagles are perched in is five feet wide and six feet deep. Viewers will notice that there are carcasses of fish or other animals in the nest, left over from feedings. The eagles clean the nest when they search for any leftover bits of food. The tree is about 100 feet tall and the nest is between 85 and 95 feet above ground.

In an email interview with the social media manager of the American Eagle Foundation, Julia Cecere, Fourth Estate inquired how long the eagle cams would be available.

“We plan on having the cameras live until after both eaglets have successfully fledged the nest and are suspected to have completely left the nesting area,” Cecere said. “This can happen anywhere from 13-16 weeks of age.”

It is estimated that the eaglets will fledge, or leave the nest, in early summer.

While visitors to the Arboretum cannot see the eagle nest, there is a great amount of scenery to take in, including multiple gardens, trees and flowers.