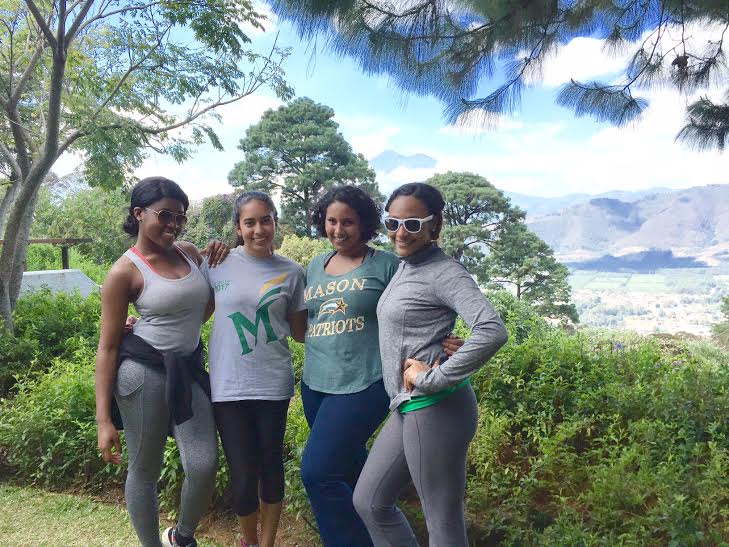 (Photo courtesy of Women of Color in STEM)

After noticing a lack of diversity in the science, technology, engineering and mathematics (STEM) field at Mason, a group of students created an organization centered on empowering women of color in STEM fields.

Women of Color (WOC) in STEM is a new student-run organization on campus with a big agenda. While the idea for the group came about in 2014, conflicting schedules delayed the formation of the group. Women of Color in STEM was officially registered in September of 2015.

“We started talking about creating this group in September 2014 when Dr. Davis, our now academic advisor, brought up the biases that women of color get while working in STEM fields,” Wintana Habtu, president of WOC in STEM, said. “We felt like there must be others who have felt this way.”

Dr. Claudette Davis, a faculty member of Mason’s biology department, started a STEM accelerated program that the founders of WOC in STEM were members of during their freshman year. After discussing the biases in the STEM program and the need to build community, Davis encouraged members to start the organization.

WOC in STEM hopes to inspire and support women of color in the STEM fields by holding various events like meetings, de-stress events and conferences. The group is dedicated to helping members thrive in their fields of study.

“We’re hoping that the support group and mentoring will really help students realize their full potential,” Habtu said. “A lot of times with STEM fields, a woman of color will face racial and gender bias. This may deter them from continuing their studies and eventually [prompt them to change] their major. We’re hoping that having a positive influence in your corner mentoring you to continue to do your best will help achieve just that.”

Being on a campus that prides itself on its diversity, the organization is eager to create an environment where diversity in the STEM field is encouraged.

“As we are not only just women, but minority women, it is unlikely to see many people that look similar or have similar perspectives in our majors,” Naomi Coles, treasurer of WOC in STEM, said. “Males dominate many STEM fields, and many times Caucasian males. This is a daunting sight when you look at yourself in comparison to the majority in your classes and will make you think twice about whether you are capable of succeeding or whether your voice matters. This is where we come in as WOC STEM to be that support system collectively as well as through mentorship.”

Mentorship is an important aspect of the group’s mission. They have designed a mentoring program within the organization for freshmen and sophomore members to receive guidance from upperclassman with similar experiences. By helping better prepare women for their futures, WOC in STEM hopes to help members become more successful and confident in their field.

“We focus a lot on mentoring within our organization as well as hope to get more involved in giving back through volunteering at high schools, women shelters, etc.,” Coles said. “We also want to ensure that the women a part of our organization are prepared in their various fields of study, and so we seek to provide them insight on networking and experiential opportunities, whether that be jobs, internships, conferences, or the like.”

Since there are no other organizations on campus geared specifically toward minority women in STEM, members of the group find that their organization is not only important to the Mason community, but to the STEM community as a whole.

“I think this group is important to students and this campus because having an organization that provides the proper guidance for minority women in STEM will help to increase the overall retention of women of color in STEM programs,” Tilicea Henry, vice president of WOC in STEM, said. “With this organization, students will be a part of a community of people with the same willingness to succeed in STEM. This organization has the ability to create a lasting impact within and outside the George Mason community.”

Henry encourages minority women in STEM fields to join the organization in order to engage with a positive community while learning how to excel in a field that can be discouraging to women of color.

“Minority women are the most underrepresented group across all areas in STEM and many freshmen that start off in the STEM field choose different career paths before the start of their sophomore year,” Henry said. “For those of us that decide to pursue STEM, the journey to success may become a long, strenuous, and lonely journey. With all the hardships we have to face throughout this journey, everyday becomes easier to walk away when you have no one to uplift you, especially when you can no longer uplift yourself. As a community, we have the power to lift each other up during all trials and tribulations, academically and personal.”

For Coles, an important aspect of the organization is that it allows members to be open about their experiences and share their stories with people who can relate.

“WOC [in] STEM provides a safe place for minority women in STEM fields to be honest about their experiences with one another and through those experiences encourage and uplift one another to keep moving forward in what they desire for their future,” Coles said. “As these women pursuing STEM fields come to campus, they can trust that they will be cared for and that they have people that can relate to them. It ensures the growth and success of our women embarking upon STEM paths here at Mason.”

While WOC in STEM is a new and growing organization, members are motivated to make a change not only in the STEM field at Mason, but also around the world.

Kathy Griffin talks improv, being a boss and celebrity run-ins