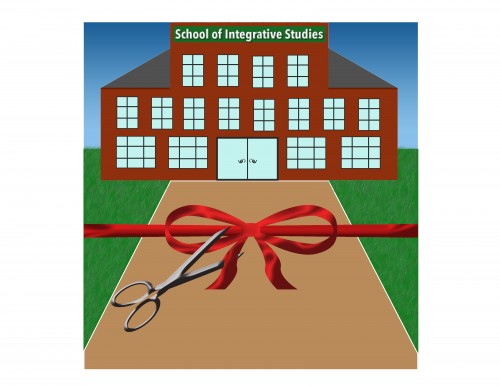 New Century College (NCC) may soon be known as the School of Integrative Studies, according to Kelly Dunne, interim associate dean of NCC. The proposed name change comes with alterations to the college’s curriculum, campus presence and community collaboration.

Dunne believes the current name does not clearly communicate the school’s unique and collaborative approach to academics on campus, and caused confusion about whether NCC was a part of Mason or a separate institution.

“We decided that the School of Integrative Studies best captures the work that we do. Our major degree is integrative studies…We want the students to make connections between their courses, between their personal life, their professional life, and integrate all of that into one experience,” Dunne said.

NCC, which was piloted in 1994 and accepted its first freshman class in the fall of 1995, offers just three majors—either a Bachelor of Arts or Science in integrative studies and a degree in environmental and sustainability studies. These degree programs are supplemented with a myriad of concentrations and minors chosen from a variety of disciplines, from life sciences and legal studies to social justice and sustainability studies.

NCC separates itself from other Mason colleges by emphasizing experiential learning. It is home to the Social Action and Integrative Learning (SAIL) program, which works with different schools to provide students, faculty, administrators and alumni educational opportunities through volunteering, civic engagement, nonprofit work and field research. Some NCC professors also offer courses that take place all around the world, such as in Cambodia to study spirituality or New Hampshire to study the political primary process.

Dunne said these integrative aspects of NCC make the name “School of Integrative Studies” a better fit for the college.

Faculty and staff from NCC had been in serious talks about a name change since March of this year, Dunne said, although she believes the idea to change the name originally occurred about fifteen years earlier at the start of the new century.

“There’s a tradition of New Colleges in the United States; there’s one in Florida and New York…And it’s kind of a name that represents more experiential, non-traditional type learning, more student involved active learning,” Dunne explained. “We could have been the New College, but because it was almost the 21st century, we became New Century College.”

Dunne said although NCC operates under the College of Humanities and Social Sciences, prospective students are often confused about what programs it offers, whether tuition rates are the same and whether or not it is even a part of Mason at all. The proposed name change, she hopes, will convert NCC into a more recognizable institution on campus.

The confusion around the name, said Dunne, has limited the school’s visibility and did not accurately describe its collaborative and partnership efforts around campus. Although about ninety percent of the services NCC offers, such as minors and alternative spring break programs, are open to the entire Mason community, Dunne still believes the school is “hidden.” The goal of the proposed name change and subsequent rebranding of the school is to clarify to students, faculty and administration all that NCC has to offer.

Besides from its interdisciplinary approach to degree programs, NCC has also provided a unique opportunity for incoming freshmen with the Cornerstones program. Twenty years since it was first piloted, NCC is now phasing out Cornerstones from its offerings.

“The idea [with Cornerstones] was that students would join us in the first year and they would all have a shared curriculum,” Dunne explained. “As they built up through sophomore, junior and senior year, they had a shared experience, and all the instructors know what they had done.”

Although this program worked for many students in the two decades it was in place, Dunne said a common first-year education is harder to accommodate when an increasing number of students enter Mason with Advanced Placement and dual-enrollment credits.

“It was a great program, it served its purpose, but students are changing. They want more choices,” Dunne said. “The number of students in the program had been static for the past four years.”

Since the demand for the program had not been growing, Dunne said the school is deciding to change the way they approach freshman education by eliminating Cornerstones completely. The school also plans to increase its focus on the “senior year experience.” For Dunne, keeping students involved and engaged the entire time they are on campus will help NCC reach its goals of increasing retention rates, student services and student satisfaction.

Looking forward ten years, Dunne said she hopes to see an expansion of cross-university joint degrees and hopes to see the School of Integrative Studies as a facilitator for students to combine courses from diverse disciplines like visual and performing arts, engineering and conflict resolution.

Although the name of NCC is changing to the School of Integrative Studies, Dunne said it is hard to forecast any changes in the academic program, as those initiatives are often student led.

“Our main goal is to educate and serve the students,” Dunne said. “We want to make sure that whatever we are doing is in line with whatever our students want and need and will be appealing to potential students, too.”