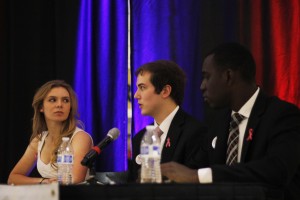 On October 19, the Johnson Center was the host venue to the annual event “First Of All: We Vote,” a debate on the electoral issues of the season held traditionally between the College Republicans and the George Masson Democrats.

Both moderators said they were excited about the chance to moderate this year’s iteration of the event. When asked about her hopes for the event, Bhatia said one of Student Government’s goals for the debate was to have an active audience.

“[Student Government] hoped that an engaged audience would be present at the event, and that was definitely the case. We received many questions to pose to the teams for the debate, both from the audience and via social media,” Bhatia said.

Agyemang shared a similar sentiment. During his introduction, he said the event corresponded to Alpha Phi Alpha’s program, “A Voteless People is a Hopeless People” (VPHP), which was started by Alpha Phi Alpha’s national chapter in the 1930s. The program was originally founded to ensure that African Americans would be able to register to vote, combatting the various Jim Crow era laws. Today, the program has shifted to creating political awareness and empowerment for voters.

“I want people to be aware of the election on November 3, and to ensure that people actually go out and vote. If you want somebody in charge, go out and vote. Having both the Democrats and Republicans present their platforms shows students that their ideas are different,” Agyemang said.

With the university in close proximity to both Fairfax City Hall and to the nation’s capital, Bhatia hoped that similar future events would have an impact on the Mason community.

“They are educational, and the importance of having them is that students need to be educated about all the issues that affect the various levels of government, be it local, state and federal,” Bhatia said.

Agyemang pointed out that there was a portion of the Mason community that was missing from the event.

“I also wish that some members of the George Mason University administration were in attendance with events such as this, where the topic of tuition increase and access to education are brought up,” Agyemang said.

Debating on behalf of the George Mason Democrats were freshmen Tim O’Shea, Danni Gonyo and Alex Hannon. From the College Republicans were sophomores Elizabeth Dorrian, Colin Sapko and Wisdom Nwike. Both teams were on stage debating issues ranging from local and state election issues, to audience questions about marijuana legalization, gun control, Planned Parenthood, ABC laws, the DREAM Act and  the “Black Lives Matter vs. All Lives Matter” question.

O’Shea, of the George Mason Democrats, addressed the last question stating, “Obviously black lives matter, because of the structural violence and institutional racism that this community continues to face.”

Nwike, of the College Republicans, agreed that “black lives do matter, but as do [the lives of] Whites, Latinos and Asians.” He also added a statement that garnered the most reaction during the debates: “The black man is the most privileged man in America.” After an initial moment of silence from the audience, Nwike’s comment earned a smattering of applause and quite a few agitated reactions. Due to the time restrictions on the rebuttal, Nwike was not able to further elaborate on his statement.

Audience members had various opinions on debate topics and reasons for their attendance. Sophomore Isis Mosqueda, a government and international politics major, initially attended the event for the George Mason Democrats as she serves as treasurer for the organization.

“I also wanted to get a feel on where Mason students stand on the issues that were presented today,” Mosqueda said.

Similarly, sophomore Samuel Carpenter, a business management major, stated, “I like seeing what the ‘political climate’ at the university is like, while also seeing what many of my peers think. I like to see new ideas presented.”

Junior Ryan Cook, a finance major, had a different perspective saying, “I came last year, and while I am not affiliated with either group that is debating, I love seeing people involved in these events. I also came for the entertainment factor; really wanted to see people go at it.”

All agreed the event was well managed, though Carpenter had wished for a different outcome concerning the questions.

“I would have liked to see questions that challenged the debaters to outline policy, showing the key differences between the parties. I would have also liked to have seen a Libertarian perspective at the debate,” Carpenter said.