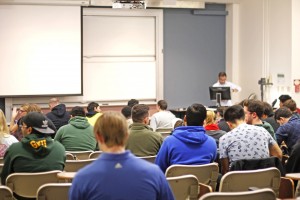 In the past month, students in some large lecture classes have been subjected to a scam.

The scam comprised of students being asked to sign up for free tutoring by giving their names and numbers and then were spammed with advertisements.

In an announcement on Blackboard, MATH 114 professor Gary De La Pena warned his students about the scam.

“The [math] department has received reports that certain persons are coming into large lecture Math classes and asking students to sign up for free tutoring by listing their names and cell phone numbers.  Those students are then being spammed with advertisements on their cell phones and asked to click on a link,” read the announcement.

De La Pena’s announcement continued that the scam is taking place before the professor arrives in class and students should not sign any such paper.

John Schreifels, a professor and chair for the chemistry and biochemistry departments, said this scam occurred in his chemistry lecture class.

“Somebody came in before class, before I got there, and acted as if they are somebody having to do with the university and [said] there was going to be free tutoring and that [students] needed to sign up for it by giving their name and cellphone number,” Schreifels said. “They were gone by the time I got there.”

As for why these scammers went into his lecture, Schreifels assumed it was due to his large class size.

“I have a very large class, so I’m presuming that’s going to be the highest deal per class. They’d have access to 300 people as opposed to going into a small lecture where they only get 50 or so. That’s my guess,” Schreifels said.

He continued that he learned about the scam when a student in the lab portion of his class complained about being spammed after having written their number down for the supposed free tutoring.

Schreifels said he thinks a good way to combat these scammers is to warn students at the beginning of each course to be wary of anyone the professor has not authorized beforehand.

“Maybe we need to have something that we state to the students that says if there is anybody other than somebody I’ve authorized [offering services] they should ignore them,” Schreifels said.

This in-class scam is not the only one that has happened recently. This past Wednesday, October 21, a mass email was sent out to the Mason community warning of several incidents where Mason students were being approached by scammers attempting to sell clothing or book and magazine subscriptions.

As for the second merchandise scam, the email said that on Sept. 28 and 29, multiple scammers approached students near the Johnson Center who represented themselves as book salesmen. The email continued that these scammers then solicited money and personal information from students in exchange for book and magazine subscriptions.

Because various scams have been occurring recently, the email offered tips on how to recognize a scam. One tip the email brought up frequently is that if the offer of an “opportunity” appears too good to be true, it probably is.

Cozby added that in general, it may not be a good idea to provide information to strangers, or people who it can’t be confirmed why they are asking for that information. Cozby continued that if somebody approaches a student at a parking lot or as they are leaving their dorm, that’s unusual. Another red flag is if the seller wants to be paid in cash; a legitimate business would normally accept credit cards.

The email also said that all crimes and suspicious persons or incidents, however minor, should be reported to Mason Police immediately at 703-993-2810 or 911.