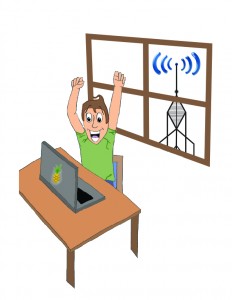 Walk through any level of the Johnson Center, and frustrated screams of “Wi-Fi sucks!” can be heard reverberating off the walls. But a local startup is hoping to change that.

The company, CirrusWorks, was founded in 2012 and works to provide the most efficient and reliable Internet in classrooms, offices, hotels and beyond, according to its website.

David Giannini, creator of CirrusWorks, offered a possible explanation for continual Wi-Fi frustration: when there is a multitude of users competing for access to limited bandwidth, it puts stress on the Internet circuit. Devices, he said, are predatory in nature, and something as seemingly simple as streaming a video can convert the device into a black hole of bandwidth.

Bandwidth refers to the amount of information the Internet can process per unit of time, according to About Tech. The amount of data that can be processed depends on the size and capabilities of the bandwidth.

“With the advent of smart phones was just an explosion of devices that people were taking with them not just on the road but also to school and to work,” Giannini said. This dependence on electronic devices can lower the level of performance and efficiency that the Internet can provide, especially when students are switching between doing homework, streaming music and videos, and connecting on social media, he added.

CirrusWorks’ approach to Wi-Fi includes the utilization of a bandwidth optimization device, called The Governor, which uses software and algorithms to calculate the proper reapportionment of bandwidth within a system. The firm’s method is unique because the software it uses is a substitute for manual labor. The Governor is patented proprietary technology, so no other company can take this approach—not even major technology companies, said Giannini.

According to a recent press release, CirrusWorks completed work on improving Lynchburg College’s Wi-Fi this past month. The college’s network administrator, Jeff Harris, said that the community has seen improvements in the network, “with service complaints virtually disappearing upon installation.” Lynchburg College, however, only has a student body of 2,800, a small fraction of Mason’s 33,000-person student body.

Mason’s problem with Wi-Fi is a little different, according to Ben Allen, director of Network Engineering & Technology, and Marilyn Smith, vice president of Information Technology and chief information officer, and has more to do with hardware and the sheer size of Mason’s student body and campus than bandwidth. 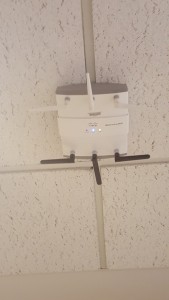 “At your house, you have everything combined in one device. On campus, we really just have dedicated functions—we have access points. You usually see them stuck to the ceiling, usually with interesting blue lights; it looks maybe a little like a smoke detector. It’s a set of radios inside that your device connects to,” explained Allen. These access points were originally deployed in the early 2000s, when dependence on and expectations about the quality of Wi-Fi began to rise.

A decade later, the problem is the same. “No matter how much [access points] you put up, you always need more,” said Allen. The solution now is to work on density: for every room or hallway, there will be not one but multiple access points, and in open areas like the Johnson Center, access points will come equipped with antennas to direct the Wi-Fi to specific locations.

Mason works with outside vendors like Cisco for the installation of the access points. The process can be as quick as a few hours, but can take longer with obstacles like the need for additional wiring or breaking through walls when installing outdoor access points.

According to Allen, access points transmit and receive signals in bands at frequencies of 2.4 GHz and 5.8 GHz. A quick fix to connectivity issues, said Allen, is to switch from the 2.4 GHz band to the 5.8 GHz one. Though not all devices have this ability, it reduces interference for those that do.

Although the concept of perfect network connectivity all the time without interference would be ideal, it is not realistic. According to Allen and Smith, expectations are constantly rising, but technology is not always ready to meet them.

Another restraint is money. “We always have budgetary concerns,” said Smith. “We have different pockets of money, and we actually have to make decisions between security projects, network projects, classroom investment—all of those are expensive. Right now our priority is on the network and on the classroom technology refresh. We can never do as much as we want to do.”

IT services is, however, always looking for ways to increase connectivity, and they like to gather data from the students, said Smith, who said she sometimes logs on to YikYak, an anonymous message board, to check if there are any student complaints. Students who tweet to President Cabrera to complain often get responsive help from the IT team as well, though both Smith and Allen urged students to formally log their issues through the Support Center.

“Why Not Me?” Staff Writer Book Review