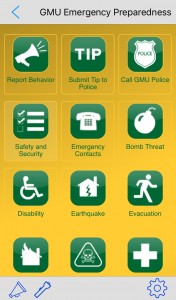 A screenshot of Mason’s page in the In Case of Crisis mobile safety app.

An old mobile safety application, In Case of Crisis, has been reworked after a turn of events in an effort to promote student safety on campus.

The free application available for iOS and Android devices can be used to report behavior to Mason’s Campus Assessment and Intervention Team, submit tips and photos, contact the Mason Police Department and access emergency response guidelines.

The application also has emergency contacts for numerous campus resources, including Counseling and Psychological Services, the Environmental Health and Safety Office and Student Health Services, among others.

The company behind MasonWatch, the application that was promoted last school year, decided to stop supporting the platform, prompting the swap, said former Chief of Police Eric Heath.

“[I]n cooperation with the Mason Office of Emergency Management, the current emergency management application, In Case of Crisis, was reworked to fill the gap on most of what MasonWatch was capable of,” Heath explained.

Heath, who left Mason September 18 to work at the University of Chicago, said the original application that was created in partnership with Mason’s Student Government would no longer be helpful to students.

“Unfortunately, the company decided at the end of the spring semester of this year, that they would no longer support the platform and as such, the application would no longer be updated and useful,” Heath said.

The original emergency preparedness application, In Case of Crisis, was then revised and has since become the primary mobile safety application for the community, he said.

“I haven’t yet downloaded the app, but I think it’s a great idea,” said sophomore Ian Canty, an economics and mechanical engineering double major. “Mason Police already does a great job of keeping our campus safe; this is just an additional way for students to communicate with first responders.”

Heath said that mobile safety applications are on the rise on college campuses.

“Mobile safety applications do seem to be the trend right now on college campuses across the country,” he said. “The challenge is balancing need with overall cost of the service and determining which one is best suited for the institution.”

“For Mason, this application suited our needs as a department and hit the mark with what we were asked to provide to the students and the greater community,” Heath continued.

“I think the app is the twenty-first century version of the blue light system,” Canty said. “It allows students to utilize technology that we all have and use daily.”

Blue light systems consist of a network of strategically placed phones that can be used to contact university police and alert them of a student’s exact location in the event of an emergency. According to Interim Chief of Police Thomas Longo, using a mobile app via cell phones is a better option for the university for a variety of reasons. Among those: cell phones provide a more exact location, it allows a caller to give more detail to the police and most people are familiar with the technology.

“It just made sense to utilize technology that everyone is using…rather than have [people] focus on, ‘Where is the blue light?’ because the blue light is in your hand,” Longo said.

Canty believes that the application is more beneficial for the community than the blue light system.

“I think students are a lot more likely to use the app as opposed to the blue light system, because it’s something that they always have with them,” Canty said. “You don’t need to find a blue light, it’s already in your hands.”

In Case of Crisis supports 28 colleges and universities, two city school districts and one high school. Students can create an account, download their respective school or district’s crisis plan and have the resources of the application at their fingertips.

Links to download the application can be found on ready.gmu.edu/mobileapp.

“It’s impossible to know when you’ll find yourself in an emergency situation, but it is possible to have emergency information in the palm of your hand,” reads the site.