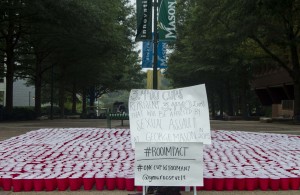 It might have been the aftermath of a great party, if all the cups were not so neatly arranged.

On Thursday, in North Plaza, the Mason chapter of the Roosevelt Institute presented this display of cups to raise awareness about the connection between alcohol and campus sexual assault.

While the chapter was particularly focused on raising awareness Thursday, its members have been working for over a year to lower the statistics. Copeland and Taylor Pigram, another chapter member, drafted a policy proposal towards the end of last year that specifically targets the Virginia Department of Alcoholic Beverage Control (ABC).

The proposal suggests that ABC should give a portion of its profits to Virginia’s public colleges with the purpose of assisting preventive and aftercare measures for sexual assault.

Specifically, Copeland and Pigram suggested that ABC donate 20 percent of its profits to this purpose — the same percentage of women who become victims of sexual assault during their college tenure.

The Roosevelt chapter also used that statistic to make the red solo cups display hit home for the Mason community.

“How do you make people support something like that?” Copeland said. “I think that you need to make it personal, and we made it personal by applying the statistics that came from our research to demographics from George Mason, and that’s what we see laid out here today.”

Over the past year, Copeland and Pigram have received esteemed recognition for their policy proposal.

In April, the Washington Post published an opinion piece by Copeland and Pigram, in which they outlined main points of their policy idea.

“As young activists on the front line of the sexual assault issue on our own college campus, we urge Virginian policymakers to consider our voices as representative of those who are most at risk of sexual assault and reallocate some of the ABC budget to sexual assault awareness education and after-care options on our college campuses,” the opinion piece reads.

Copeland and Pigram’s policy proposal was also selected as one of the 10 best ideas in 2015 in the Equal Justice group by the national Roosevelt Institute (there are six groups total).

Pigram said one of the most common reactions to the cups display was people asking about the exact definition of sexual assault.

“A lot of students today asked us during this demonstration, ‘So what is sexual assault, really?” she said.

Wellness, Alcohol, and Violence Education and Services defines sexual assault as “any type of sexual contact or behavior that occurs without the explicit consent of the recipient.” Copeland said there is a spectrum of incidents that would qualify as sexual assaults, and not everyone is aware of the less-extreme ends.

“That’s a kind of the pushback that we’re getting today. [It’s] like, ‘Oh this can’t be true because there’s no way 3,440 people have been violently and heinously raped on this campus,’” Copeland said.

She said all kinds of sexual assault are of equal importance.

Overall, though, Copeland said it was an engaging day and lots of personal stories were shared.

“A lot of times we can have these conversations without next steps, and people are left feeling lost,” Copeland said. “And I today am left feeling very excited and very energized about moving forward.”

How To Deal With Construction at Mason