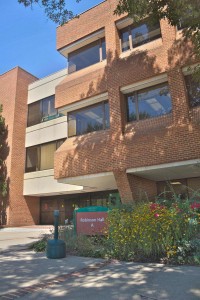 Mason has received authorization from the Virginia General Assembly, along with $5 million, to begin planning demolition and a new design for Robinson Hall. Cathy Wolfe, director of campus planning, said part of the $5 million allocated for the reconstruction will also be used to fund another project called the Improvements to Utility Infrastructure Distribution, which deals with improvements to energy efficiency on campus. According to the Six Year Capital Outlay plan, Mason’s guide that details the amounts of money the university is spending on physical assets like buildings, Robinson Hall’s antiquated design makes it almost impossible to incorporate modern technologies into many of the classrooms and offices. The building also does not meet Americans with Disabilities Act guidelines for accessibility. Other problems include the presence of hazardous materials like lead and asbestos, and water damage has led to the deterioration of the façade. According to Wolfe, planning will take approximately 18-24 months, beginning July 1, 2015, and construction will likely take 24 months, though the university will not receive authorization to begin construction until design plans are approved. The total cost of the Robinson Hall project is estimated to be $102 million.