by Hamna Ahmad and Ellen Glickman 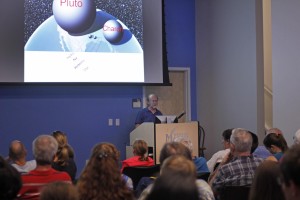 Dr. Michael Summers speaks about Pluto at the “Mission to Pluto” presentation. Photos by Claire Cecil

At the front of a crowded room, one astronomy professor described a world full of mystery and phenomena.

Michael Summers, Mason professor and co-investigator on the New Horizons Mission to Pluto, spoke to a packed room in Research Hall Monday evening. Many audience members were left with standing-room only as Summers described mysteries of the dwarf ice planet that are currently baffling scientists.

One such enigma is a giant glacier of frozen nitrogen sitting on Pluto’s equator, which measures about one million cubic kilometers. Summers devoted much of the presentation to discussing this massive structure, saying the New Horizon team has no idea how or why the glacier is there.

He joked with the audience, “If you have any ideas, I’d love to talk to you about it.”

The glacier can be seen on the right-hand side of the heart-shaped spot on Pluto. In fact, Summers said the entire right side is composed of the glacier.

The glacier, also showed signs of movement. Summers said surface images from the spacecraft have allowed scientists to conclude that the glacier “flows.” This is especially mystifying, he explained, since scientists have yet to determine the energy source responsible for the glacier’s constant movement.

The topography of Pluto and Charon (the largest of Pluto’s five moons) was surprising as well. The surfaces showed few signs of impact, contrary to scientists’ expectations. Summers said he and his colleagues expected to see lots of impact craters, like those on Earth’s moon. The images also indicate that Pluto and Charon are relatively young, “at most 100 million years old,” Summers said.

Pluto’s atmosphere, another area of Summers’ expertise, was also a source of surprise. The atmosphere’s volume is about a hundred times the volume of the planet. Summers said this is a “unique situation in our solar system.”

With less than five percent of the data back from the spacecraft, there could be many more mysteries to go. The already 14-year-long mission is not quite over yet.

The journey to Pluto

In 2001, after years of showing interest in exploring Pluto, NASA started accepting proposals for a Pluto mission. The New Horizons team is a group of researchers and scientists from across the country led by Alan Stern from the Southwest Research Institute, which is the lead institution for this project. Summers, who said he has been interested in Pluto since his graduate studies in the 1980s, joined as an expert in Pluto’s atmosphere. From the many proposals submitted to NASA, New Horizons’ was accepted. 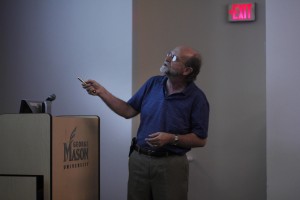 “The discoveries we made will be changing textbooks on planetary science for decades,” Summers said, describing the findings of the New Horizons team.

“Our team proposed to NASA that we would build the instruments and spacecraft, and NASA could provide the launch vehicle. After launch, our team would manage mission operations and the mission. NASA received several proposals, but ours was successful,” Summers said.

After the proposal was accepted, the team had to begin planning, building, and testing instruments and the spacecraft. Five years later, the mission was ready to launch on January 19, 2006.

“We launched from Cape Canaveral in Florida, then right afterward I caught a flight back to my home near Baltimore. “By the time I got home the spacecraft [had] passed the orbit of the moon,” said Summers. “It was the fastest spacecraft ever launched by mankind.”

According to the Guardian, the spacecraft exceeded 36,000 miles per hour at its launch. Summers said on Monday evening it passed the moon in nine hours and reached Jupiter in a year.

In December 2009, the New Horizons spacecraft reached the halfway point to Pluto, and on July 14, 2015, the spacecraft made its closest approach to the dwarf planet, sending new data and images back a day later.

According the Summers, the spacecraft was also remarkably accurate. The NASA team predicted the date and time New Horizons would fly by Pluto at the time of its launch back in 2001. They were 69 minutes off. Summers compared this to a bullet shooting from a gun. If someone were to shoot a gun from New York to a target in San Francisco, he or she could only miss by three millimeters or less if he or she wanted to beat the accuracy of the NASA scientists.

Summers, who has been a co-investigator on many other NASA planetary missions, said that none of his past projects had the same scope as the New Horizons project.

“It was just about the most amazing experience you could ever imagine. After working on the project for 15 years we had devoted a huge fraction of our lives to making it work,” he said, “When the flyby occurred we were making discoveries left and right. And we were so incredibly surprised at what we found on Pluto and Charon. It was not like anything we expected. The discoveries we made will be changing textbooks on planetary science for decades.”