This story was first published in the April 06 issue of Fourth Estate.

Any music scene—a mass gathering of like-minded talents—has a propensity for competition.

Friendly faces arise, and support often follows; still, new bands often struggle to find their own pocket in the crowded space. Confidence sputters out as momentum stalls. In this music community littered with selfish apathy the Mason-based band, Cinema Hearts, is a breath of fresh air.

The fruit of the project became the Cinema Hearts debut EP, I’ll Always Be Around. The EP’s light tunes float on nebulous vocal harmonies, hearkening to the iconic 1960s Motown sound.

“I’ve always had an admiration for that ‘wall-of-sound’ style of recordings,” said Caroline Weinroth, describing the stacks of vocal harmonies. “[Audio engineering pioneer] Phil Spector would layer and layer, and those little imperfections made it more human. I wanted to emulate that. There were simple song structures, but that’s not to say they were simple songs.”

With an EP released, the yearning to perform became evident. The project could have continued as a solo act, but local venue, Jammin’ Java invited Cinema Hearts to compete in the 2015 Winter Mid-Atlantic Band Battle, a showcase of local talent.

“I accepted the offer only to think to myself, ‘Wait, I don’t even have a band.’” Caroline Weinroth said. “Luckily Erich was able to step in immediately to help me out. The next thing was to find a drummer.” 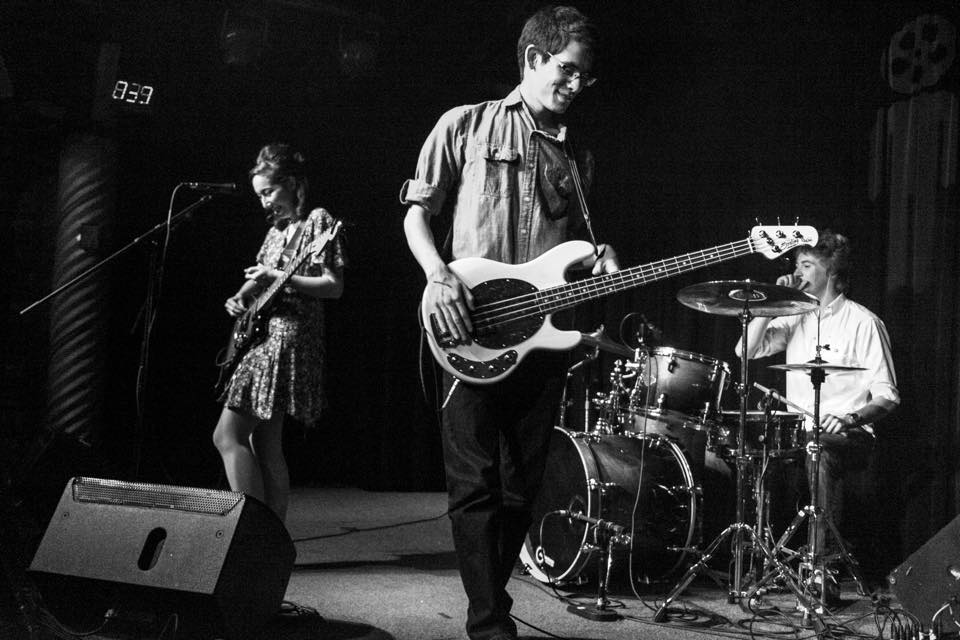 Utilizing Facebook groups designed to help local musicians network, Adelsberger rose up to assist the fledgling band. Although he initially joined the group solely for the one performance, the chemistry was undeniable and he joined the band permanently.

“I didn’t expect for it all to fit right in so well,” Adelsberger said. “But I’m glad to be a part of it.”

As for the performance, Cinema Hearts’ set was well-received, and they placed 2nd overall.

Since then, the group has played at other local venues, such as the CD Cellar in Arlington. The band’s recent performances are part of their effort to establish themselves as a prominent entity in the local scene in Fairfax and the rest of Northern Virginia. As for a more localized scope, both Caroline and Eric are actively involved in a variety of programs and organizations on campus.

“[Caroline and I] both work at Events Production at GMU,”  Erich Weinroth said. Events Production offers services such as running lighting, audio, and video for various events across campus. “I’m also a music major, concentrating in audio technology, so that helps more with the technical sides of the band.”

The group maintains a solid presence on campus, and they intend on using that to help benefit the local scene. “The scene around here isn’t dead,” Caroline  Weinroth said. “It’s just not adapting. There’s a bit of a sense of entitlement, and with it comes apathy, or a sense of exclusivity. I feel like everyone thinks they have to ‘make it,’ somehow.”

“And really, what does it even mean to ‘make it?’” Adelsberger said. “We’re trying to invoke a different feeling, a sense of community.”

The band hopes to combine resources both on campus and off in order to streamline the music experience around Fairfax and to help build awareness of the talent.

Cinema Hearts prides themselves on their lofty, pillowy songwriting and their strong, female-led presence. The band hopes to increase their presence in the local scene with forthcoming new material.

“Everything is happening so quickly,” Caroline said. “But it’s very motivating. I just want us to be known as one of those local bands that people talk about. I want people to know us. Ultimately, I just want to continue to be creative and I want to inspire others.”

“We just need to get the party going,” Adelsberger said. “We need to keep the band moving forward.”