The two brothers have donated privately to the economic department’s Mercatus Center, and some are concerned about their level of involvement with the university.

Freshman Scott Loudin asked Cabrera if he would commit to meet with students by the end of February to discuss donations from the Koch brothers and their possible influences on the university. Loudin is involved with GMU Student Power, an organization committed to academic transparency that has been trying to meet with Cabrera since last semester.

Cabrera told Loudin he believed “that information has been provided.” The president said he took pride in Mason’s recent fundraising efforts and that “we need more momentum on the fundraising side” in light of recent state budget cuts.

He also said there is nothing to hide in relation to Koch funding, and Mason has rules that limit a donor’s influence.

Junior Samantha Parsons, a co-founder of GMU Student Power, said the organization wants to see papers that outline the gift agreements with donors. According to Parsons, students at other universities have been able to obtain those documents, exposing excessive donor influence.

“We are persistently just told that we should trust the university, to believe that there are policies in place that wouldn’t allow that to happen,” Parsons said. “But it’s happened elsewhere; it’s happened in a lot of schools that the Charles Koch Foundation funds, so I don’t believe our questions have been answered [or] the information has been provided to us because we still don’t have the physical copy of any type of agreement.”

Two other students asked questions about Mason’s relationship with the Koch brothers. Another member of GMU Student Power, junior Rachel Brewer, said she went to the event to find suitable answers. 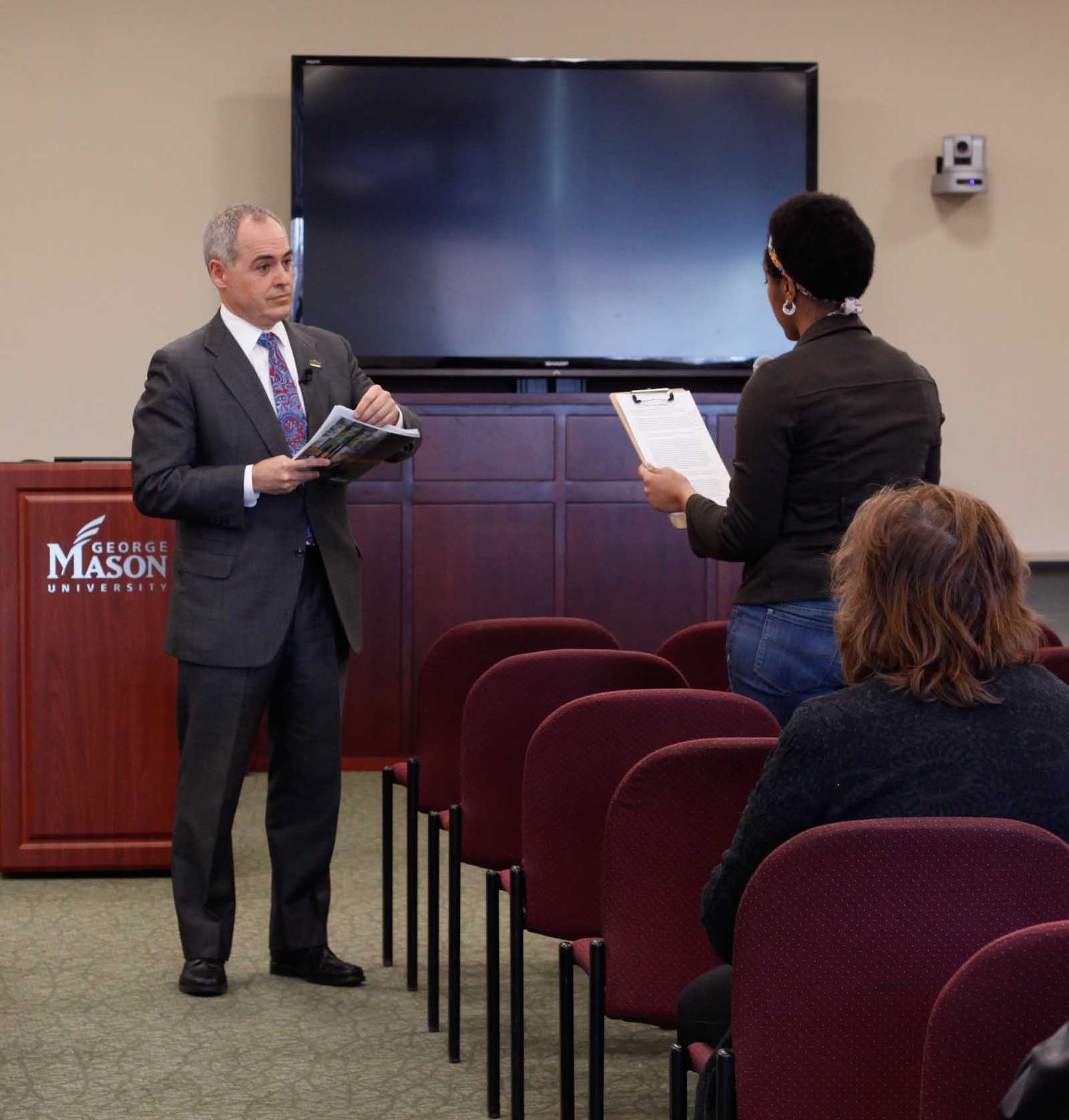 “We requested meetings multiple times,” says junior Rachel Brewer, pictured here speaking with Dr. Cabrera. “But we’ve either gotten a straight up no or answers that just led us in circles or were unsatisfactory.”

“We requested meetings multiple times, but we’ve either gotten a straight up no or answers that just led us in circles or were unsatisfactory,” Brewer said.

“We’re students and we deserve these answers,” Parsons said. “The university should be transparent with us, and that’s not what we’re getting.”

Cabrera also touched on construction issues, joking that the school’s motto should be “Where Construction is Tradition.”

“[Robinson Hall is] the centerpiece of the teaching of the university,” said Cabrera as he acknowledged its need for updates and noted that it would be the “next big priority.”

The new College of Health and Human Services building recently received a large private donation, according to Cabrera, which will spur construction and the tunnel under Ox Road is complete.

Cabrera also elaborated on recent struggles with state funding for higher education saying that the $4.2 million in state cuts last semester is now permanent, and Mason will have to make “some permanent adjustments.” He said, however, that Mason representatives intend to lobby the assembly.

“We’re not going to sit back and just suffer decisions others make,” Cabrera said.

All photos by Amy Podraza