In light of the celebration of National Coming Out Week at Mason Oct. 6-12, students are pointing to a lacking balance in visibility and knowledge of different identities in the LGBTQ community as well as obstacles faced by those trying to come out safely due to the misunderstanding of non-cisgendered people. 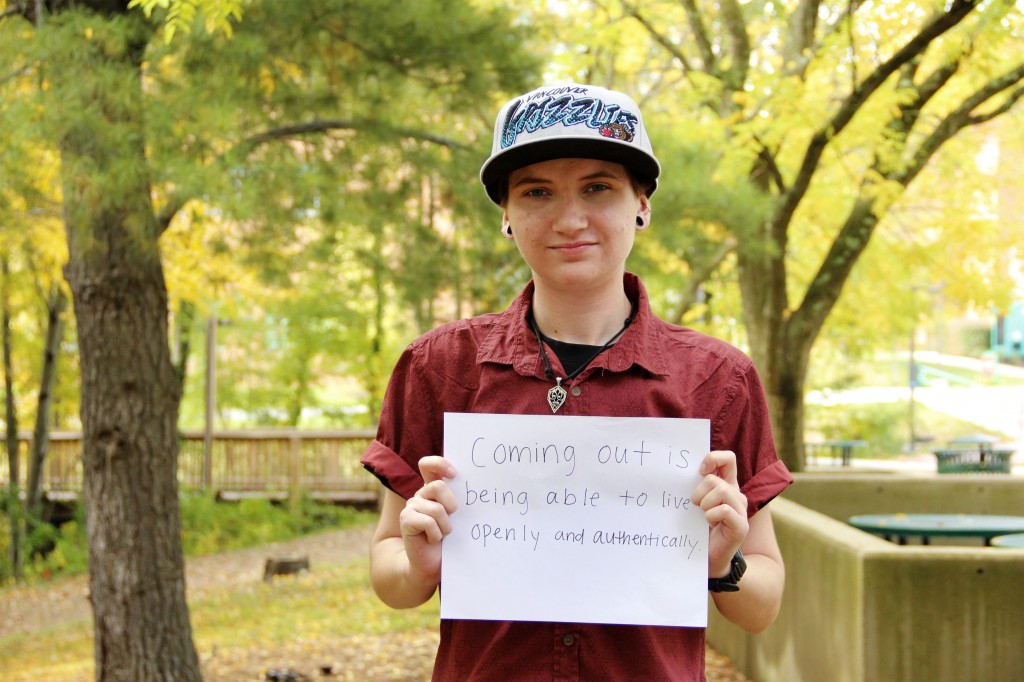 “Coming out is being able to live openly and authentically.” Blake Kosciow. Photo by Amy Rose.

GLAAD, formerly known as the Gay & Lesbian Alliance Against Defamation, defines cisgender as “a term used by some to describe people who are not transgender” and defines transgender as “an umbrella term for people whose gender identity and/or gender expression differs from what is typically associated with the sex they were assigned at birth.”

According to the Associate Director of LGBTQ Resources Ric Chollar, although it is still difficult for many, the heightened visibility of gays and lesbians in the media can make coming out easier for them as opposed to transgender and other marginalized identities.

Blake Kosciow, a senior sociology major, said that his experience coming out as a transgender male was challenging due to the lack of knowledge and understanding surrounding transgender identities.

“It was really difficult; I feel like sexuality is more understood these days than gender. So coming out with a gender thing is a lot more stressful. It was kind of different,” Kosciow said. “My experience, what I did was I just, since transgender stuff isn’t widely understood by people, I had friends who knew exactly what I was talking about and I had plenty of friends and family who had no idea what I was talking about.” 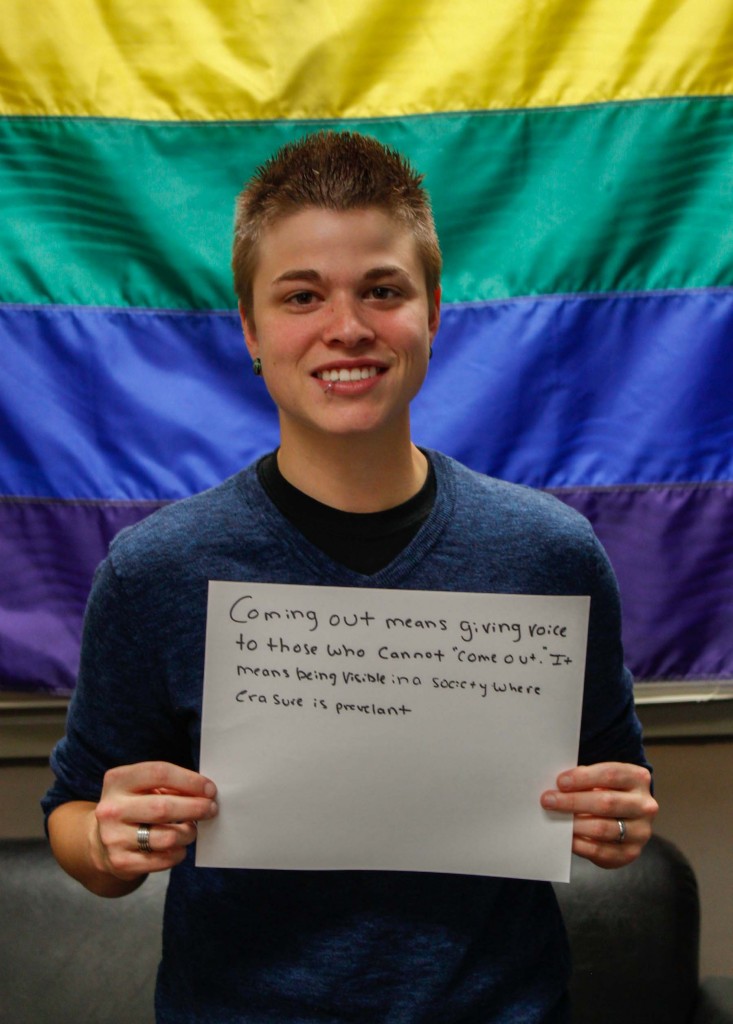 “Coming out means giving voice to those who cannot ‘come out.’ It means being visible in a society where erasure is prevalent.” Em Eichelberger. Photo by Amy Podraza.

According to Chollar, coming out can be difficult due to the heterosexual and cisgender normative society that we live in.

“[Although] some things are [getting better], at least for some areas around LGBTQ visibility and rights, we are still programmed, everybody, with homophobic messages and with trans-phobic, cis-sexist — so the assumption that everybody is cisgender, as in not trans,” Chollar said. “The world is set up for that and each of us learns it.”

Because of these programmed messages, Chollar pointed out that people who identify in the LGBTQ community have to deal not only with people who are unaccepting, but sometimes have to battle with internalized homophobia or transphobia as well.

“[Part of] self-acceptance is about unlearning and deprogramming the negative messages that many people have,” Chollar said.

Though coming out to oneself was not stressed during the National Coming Out Week events such as the flash lecture which focused more on disclosing identity publically, Chollar said he hopes the interaction between students and seeing examples of different identities being represented allowed students to feel more comfortable with what they may be feeling inside.

Em Eichelberger, a graduate student studying social work who interns in the LGBTQ resources office, said that National Coming Out Week is an opportunity to give the LGBTQ community a voice.

“A lot of times, especially with identities that aren’t as prominent in the media… [identities] get completely erased,” Eichelberger said. “Coming Out Week, to me, is a platform where students who have those identities that are often times erased by larger systems can say, ‘I am visible, I am here.’”

National Coming Out Day has been celebrated in the United States for about 26 years, beginning the year following the March on Washington for Gay and Lesbian Rights in 1987. The LGBTQ movement, politics and liberation, however, had been happening for many years before the march.

Chollar said Coming Out Day and Week observes and honors people in the LGBTQ community, but its intention can be seen as multi-purposed.

“In some ways it’s directed to people who identify within the LGBTQ community and encouraging each of these folks to take another step toward more fully coming out,” Chollar said. “Meaning, to be one step closer to living a full and authentic life with all of the different parts of ourselves.”

It is important to note, however, that the act of coming out cannot be simplified to lasting only one day or week, but instead is a process that goes on throughout the course of someone’s life.

“The coming out process is never ending,” Kosciow said. “It’s not one [event] like I think people perceive it as one event. You tell people and that’s it. But coming out is a day to day process like every day you run into some situation where you have to explain yourself. You are always going to encounter people who don’t understand who you are, so there’s always going to be need for explanation. The initial coming out just allows people who support you to understand you and know how to respect you better and support you better. It could be a really big help in people’s lives.” 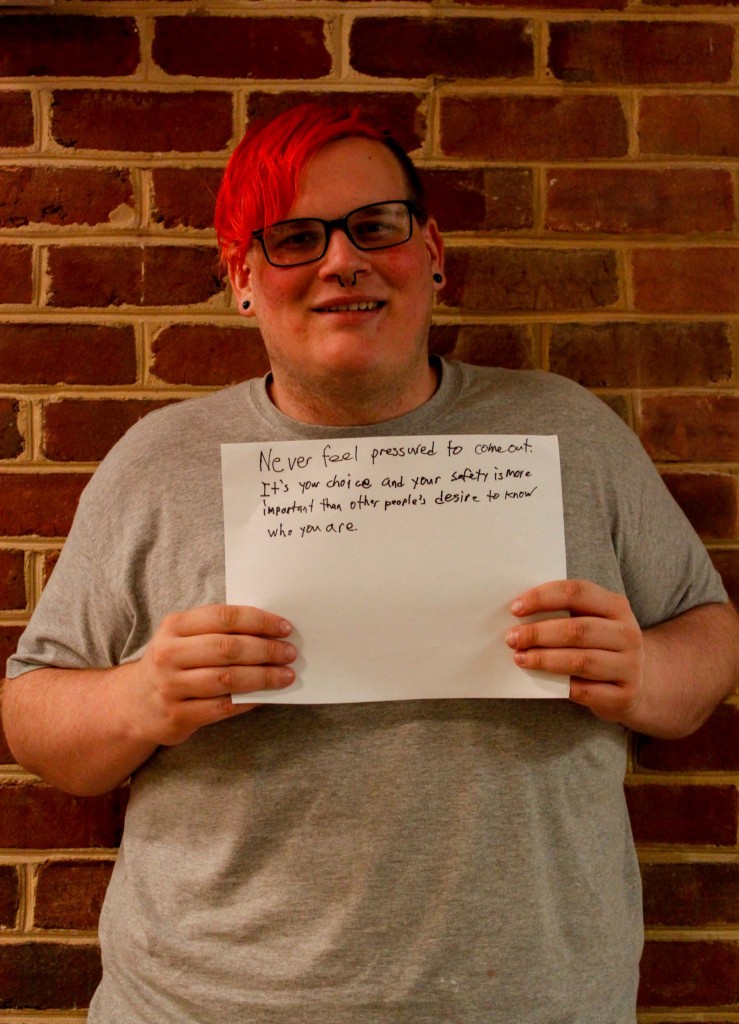 “Never feel pressured to come out. It’s your choice and your safety is more important than other people’s desire to know who you are.” Bird Hansen. Photo by Amy Podraza.

Bird Hansen, a creative writing major, said coming out can be a freeing process, but is often times marked with difficulties.

“I think a lot of times coming out is definitely a point of freedom. It’s definitely a way to breathe easy, but its also one of the most difficult things that anybody could every do. As far as you don’t really know what the reaction is going to be and so it’s like a giant fear until it’s over, then it’s a wave of relief, almost,” Hansen said. “[When you come out] it’s like a giant fear of it’s never going to work out right and it’s not a good idea. It’s like a feeling of constantly being on edge, but once you are out to somebody it’s relieving because you no longer need to have that shield up of protection.”

Although coming out can be a positive, empowering change in a person’s life, for some that is not always the case.

“I definitely don’t think it’s something that everyone needs to do or at least everyone should do, because there’s a huge risk in coming out and there are a lot of people who don’t have the ability to because of their situation. I think it’s imperative that they understand that it’s totally okay to not be able or not want to come out of the closet for your own personal reasons because safety is always the number on priority,” Hansen said. “If you are comfortable, the way you are and you know that coming out will make you be in an uncomfortable situation, then it’s definitely better to not come out because you don’t want to bring that undue stress. I think when you are in a position to come out it’s great but it’s also totally your choice. It’s never something that you should feel obligated to do.”

Eichelberger agreed that the environment someone is in may not always be conducive to coming out and thinks the National Coming Out Week activities done on Mason’s campus reflected a non-obligatory stance.

“Specifically Mason and LGBTQ resources does a really good job of creating a safe space where there’s not that kind of added component of like ‘well you have to come out,” Eichelberger said. “You have to be visible. I think it’s more for students to participate as they see themselves comfortable with participating.”

As a graduate student working with LGBTQ Resources, who was also involved with the office as an undergraduate, Eichelberger said they have seen a shift of acceptance as well as safety for LGBTQ students on campus.

“To see that kind of shift where I feel like there’s a safer environment for the students that I’m now involved with on campus. It’s really profound,” Eichelberger said. “I definitely think there has been a shift especially with trans identities. I think there’s been a huge amount of attention that’s been called to that.” 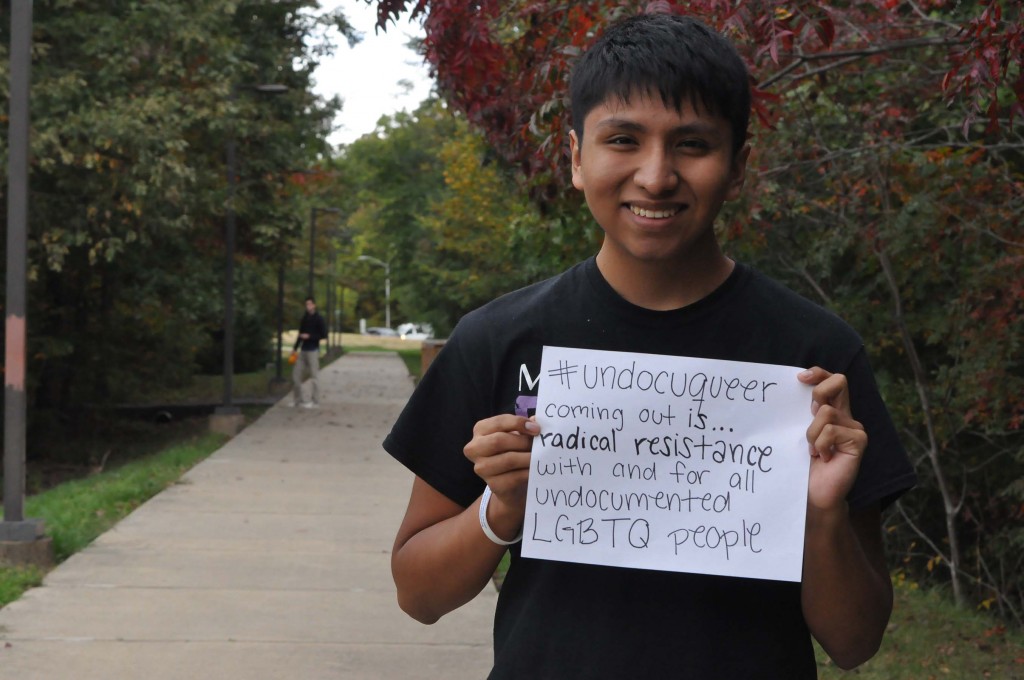 “#Undocuqueer coming out is… radical resistance with and for all undocumented LGBTQ people.” Rodrigo Velasquez. Photo by Walter Martinez.

Though increased visibility and acceptance towards all people who identify within the LGBTQ community is an important part in making coming out a safe option for more people, Chollar added that National Coming Out Day also presents an opportunity for allies to get involved in making an environment safe for others to come out.

“It’s important that an office like this is working to support the needs of students, and people that are trying to be allies and friends of LGBTQ folks get that not everybody can come out. Not everybody is safe to, not everybody has the resources, workplace protections are not always in place and so for safety reasons, we’re not taking a party line that everybody is supposed to be out and open in every place of their lives,” Chollar said. “But what we do think is that this day is one where not only LGBTQ folks, but also allies can commit ourselves to making the world a safer or better place so that more of us can come out.”

According to Chollar, one way to define an ally is, “someone who is more privileged than whatever the marginalized status is, [someone who] is committed to use their privilege to help open those doors.”

“Even within the LBGTQ community, we need to be allies to each other in the sense of, as a gay man, can I make a commitment to be an ally to women and to transpeople within LGBTQ, can I be an ally to folks who identify as bisexual or pansexual? Because a lot of doors are open to me that aren’t open to other folks,” Chollar said. “I think it’s important for allies to step up and say, ‘you know, my feeling better is dependent upon and interlinked with your feeling better.’ We’re all in this world together.”

Guantanamo Bay politics through the lens of a photojournalist