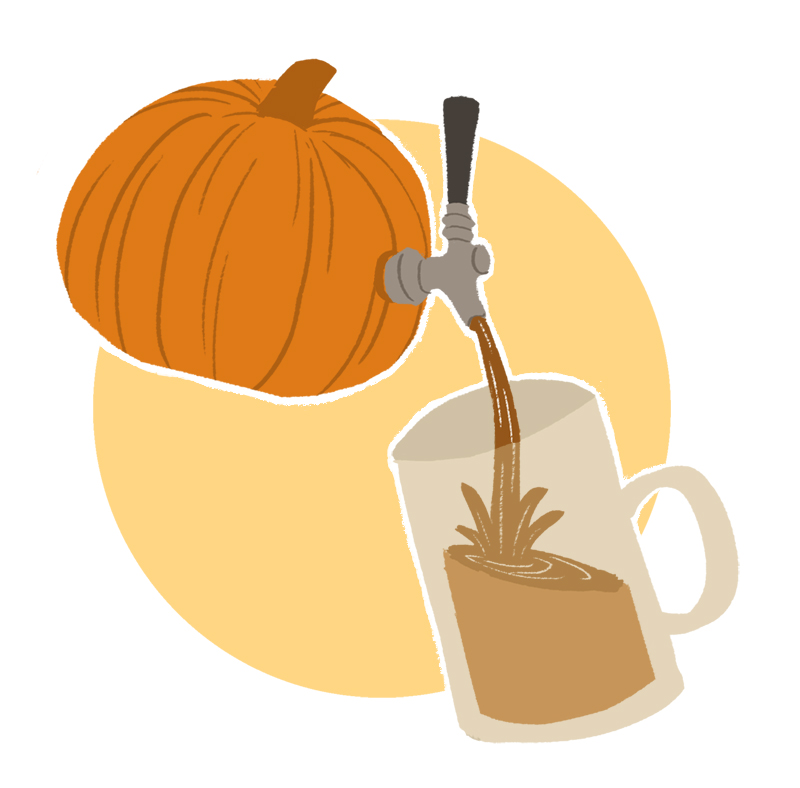 Autumn ushers in a revolving door of seasonal selections in the beer world, and no beer has dominated the fall seasonal market like pumpkin beer.

It is not just beer though. Pumpkin is absolutely inescapable. From September through November pumpkin is jammed down our throats: pumpkin scones, pie, tarts, lattés, even soup. Everything “tastes” like pumpkin, even beer. Almost every major player in the craft brewing industry makes pumpkin beer a staple in its fall seasonal line up. It is certainly true that pumpkin beer is here to stay, but on an undergraduate budget, is it really worth buying? College is a wonderful time of exploration, and developing one’s taste in beer for the rest of their life is no exception. The issue that plagues the college drinker hoping to expand his/her palate is not just what they like, but whether or not the price is right.

Pumpkins are a long developing fruit. They take almost one hundred days after planting to ripen and become ready for harvest. This means no fresh pumpkin could ever find its way into the hands of a brew master until the third week of October, and the final product not set to hit selves until late December.

No one wants a pumpkin beer in December, so how on earth could brew masters everywhere have pumpkin beers on every grocery store shelf in America by mid-august? The answer is very simple. To meet the necessary timetable to market pumpkin beers to American beer drinkers during the fall season they cannot use fresh pumpkin, instead the vast majority of brewers use preserved pumpkin purees. Purees that in some cases contain vast amounts of Hubbard and Butternut squash.

“To me a quality product is one that there is a market for, I have to set my personal tastes aside, if my customers demand a pumpkin beer in the fall, I have to carry it. If they are using fresh pumpkins or purees, what is the difference so long as they like them?” said Arthur Lampros, a wine and craft beer shop owner in the greater northern Virginia area about the subject of quality in pumpkin beer.

Squash or not, when it comes to spending hard-earned cash on any beer it comes down to taste alone.

So in the spirit of anthropologists and adventurers before me, I charged into the craft beer world armed to the teeth with fall beers. I set up a blind tasting to see just what two of my peers would prefer in a fall beer regardless of accolades or advertising. A remarkable thing happened that evening, out of the four beers selected the pumpkin ale scored the lowest average score between the two subjects.

The pumpkin option received a pedestrian score of 5/10 and had the lowest perceived cost at $6.99 a six-pack. The local option I provided my subjects with outscored the pumpkin heftily with an 8/10 with an average perceived cost of $9.99 per six-pack, which just so happened to be the average cost for a six-pack of craft beers. These two beers just happened to have the same base beer, they were both brown ales, but the pumpkin option was stuffed with baking spices that the subjects felt were over bearing.

“This doesn’t taste like pumpkin or even pumpkin derived, this tastes like pumpkin spices like cinnamon,” said Nick, a former Mason hockey player and craft beer nut. He went further saying that he would only ever drink it again if it was given to him, and would refuse to buy it.

After sampling the last two beers, a traditional German hefeweisen and British banana bread ale respectively came the revealing, which shocked my subjects. Having formed very strong opinion of each beer based on taste and not perceived quality through appearance or price, destroyed their preconceived notions of quality. The price of the pumpkin beer sampled came in at $6.99 per 22 ounce “bomber” and was rated this past year as America’s best pumpkin beer by Beeradvocate.com. The traditional brown ale came from a small Richmond area brewery and cost a mere $3.49 for a bottle of the same quantity. Upon hearing this the second subject Sam said,

“I will absolutely have this beer again,” said Sam, the second subject. “I would with no question have this in the fall over a pumpkin beer, and had I known this is local I would have paid even more than I thought I would have had to.”