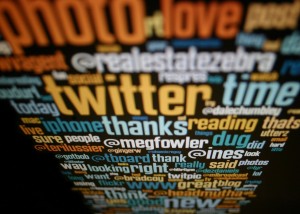 That’s the gist of CFO Anthony Noto’s announcement at the Citi Global Technology Conference last Wednesday. In addition to adding a group chat feature, the social network plans to adopt a new filtering algorithm that would arrange user feeds according to perceived relevance instead of the traditional reverse chronological order. The idea is that timely tweets will no longer get buried by noise, allowing for a more efficient, less chaotic experience.

Okay, you’re thinking, so what’s the big deal? Social media platforms and websites make changes all the time. More often than not, these changes are greeted by an initial torrent of gratuitous outrage before everyone gets used to it and calms down. But this latest development isn’t just a minor design tweak. If implemented, it will completely transform the way information is transmitted and consumed on the site.

Since I grudgingly signed up for my own account a couple years ago, Twitter has become my uncontested favorite form of social media – or at least the one on which I most enjoy wasting time. Not only does it provide instant, 24/7 news updates, but it also allows me to follow baseball games in real-time, eavesdrop on celebrity conversations and watch as people disintegrate into hysteria after the latest episode of Game of Thrones. Far from detracting from my experience, the rapid-fire mayhem is precisely what I love about Twitter. There’s something bizarrely comforting about half-formed ideas and non sequiturs, stream-of-consciousness rambling riddled with arbitrary all-caps and punctuation.

Of course, this isn’t just about my personal preferences. Not only would filtered feeds rob Twitter of its characteristic spontaneity and us of the opportunity to see half a dozen people make the exact same joke at the same time (one of life’s little random joys), but it could also have significant social implications. Rarely have the differences between Twitter and Facebook been more apparent than during the Ferguson protests and ensuing tumult in August earlier this year. Whereas Twitter was flooded with photos and live updates from journalists and other individuals at the scene (not to mention numerous comments from outsiders expressing outrage, disbelief, and support), by most accounts, the event was virtually nonexistent on Facebook. This isn’t because Facebook users are necessarily less caring or attentive than those on Twitter; it’s because Facebook employs an algorithm that prioritizes posts based on users’ past activity. Although (ideally) the filter allows for a more personalized experience, it also reduces Facebook’s usefulness as a source of breaking news, since users are less likely to encounter information that doesn’t directly pertain to their previously established interests.

Algorithms represent just one of the many ways in which the media is able to control the news cycle and thereby, whether deliberately or not, perpetuate existing inequalities. Certain people and issues inevitably dominate the headlines, while others remain wallowing in obscurity. As much as people deride Twitter for its clutter, it serves as arguably the best online outlet for groups such as women and racial minorities whose voices are frequently marginalized or outright ignored by the mainstream press. If it implements a Facebook-like filter, there’s a distinct possibility that future events like Ferguson and countless other serious issues will go unnoticed. As extreme as it sounds, this counts as a form of censorship.

Even as it is, the Internet tends to act as an echo chamber. Social networking sites like Twitter and Facebook enable users to choose who they want to follow and, as a result, what they want to see. For the most part, this approach succeeds in making social media a more enjoyable and efficient experience, but at the same time, it limits people’s exposure to new ideas and points of view. It’s one thing to want to eliminate the misogynistic, racist and otherwise hateful trolls who routinely spew bile across comment boards and online forums; it’s quite another to not want any sort of conflict ever. The beauty of the Internet is that it’s filled with so many different people with so many different opinions and perspectives. The more you try to restrict your access to those other opinions and perspectives, to only engage with people you agree with and ideas you’re familiar with, the more you’re wasting this vast resource. It’s hard to have a conversation, least of all a productive one, when all the participants are huddled in their private corners, too busy regurgitating what they already know to contribute anything remotely original or insightful.

Needless to say, there are plenty of jerks and useless things on the Internet, but I am fully capable of figuring out what to care about myself. I don’t need a computer to tell me.

Where Does Football Fit?