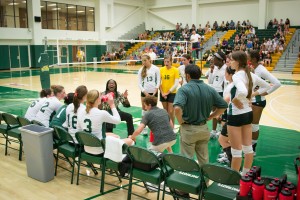 Mason women’s volleyball looks to have a bounce back year in 2014. (Gopi Raghu/Fourth Estate)

Last week the Atlantic 10 conference released the preseason women’s volleyball poll, predicting that Mason would finish seventh in the conference. Coming off a tough first year in the A-10 where the team only won three conference matches and seven matches all year, the Patriots hope to translate a strong recruiting class into better results in their sophomore A-10 season.

Why They Could Succeed: Strong Coaching and Recruiting

While the women’s volleyball program has had it’s struggles in recent years, it is still one of the most decorated programs in Mason’s history. Coach Pat Kendrick has been a large part of that success leading her teams to 8 Colonial Athletic Association titles and 6 NCAA tournament appearances over her 29 seasons as head coach of the Mason women’s volleyball program. 29 seasons makes Kendrick the second longest tenured coach at Mason behind Bill Brown, and her experiences can help teach this team what it takes to win.

The Patriots also can boast a recruiting class featuring 6 new players for coach Pat Kendrick. This recruiting class earned an honorable mention from PrepVolleyball.com for the best recruiting class in college volleyball. The class features Mara Barkley, a 6’2″ hitter, and Jelena Cobanovic, a 5’6″ libero transfer from Northeastern Junior College. In addition to her collegiate experience, the Serbian libero also has a wealth of international experience. This incoming class could provide this team a nice spark this season.

Why They Could Struggle: A-10 Conference Schedule

A lot can change from season to season, but last season was a tough one for Mason in conference. The Patriots went 3-11 in conference with their only victories against a LaSalle team who did not win a single A-10 game and a Fordham team that also went 3-11. Against teams not in the bottom three of the A-10, the Patriots were shut out in matches five times and only won seven games in their eleven conference losses. Again, a lot can change year to year, but Mason will have to perform better against the better teams in the A-10 to improve this year.

Junior outside hitter Morghan Martin returns for the Patriots and will be a key member of this year’s team. Coming off a season where she lead the team in kills and aces. Her 2.43 kills per set ranked seventh in the A-10 during conference play. Joining Martin on the frontline will be Junior middle blocker Lolade Owokaniran. Owokaniran was a stalwart averaging 1.34 blocks per set, which ranked third in the A-10. Martin and Owokaniran playing well will only help the Patriots improve from last year.

Mason will certainly miss Lana Zonjic. Arguably Mason’s best hitter, Zonjic missed nine games due to injury, yet was still able to rank in the top ten in kills per set. As a Junior, Zonjic earned second-team All-CAA honors while finishing second in the conference in kills per set. Her ability to score will be sorely missed this year.

Coming into this season, Mason faces a tough conference schedule, but a strong recruiting mixed with a solid core of returning players could help the Patriots climb out of the bottom three of the A-10. Coach Kendrick’s team opens their season Friday in the DC Volleyball Challenge against Howard then host Georgetown Saturday in Fairfax at the RAC Gym.