This post was originally published in the Aug. 25 issue of Fourth Estate. 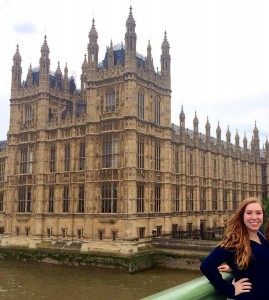 Elena Beasley poses in front of the House of Parliament in Westminister, England.

For two months, Beasley was able to experience life in Europe while gaining experience in her Events Management major.  Beasley started her day by heading into the office every morning and starting research for upcoming events.

“I was in charge of looking up the stories we were going to use for contacting different companies,” Beasley said.

Beasley would then be able to talk to the CEO of these companies through LinkedIn.  They were able to plan events in Amsterdam, Scotland, Germany, Australia and England.

Beasley cites the opportunity to be internationally published as one of her favorite accomplishments while interning.

“It was an incredible opportunity for me,” Beasley said. “My face was actually published on it and it got sent all over the world.”

She also created a content piece that was used for advertising for an event.

“I used the interviews I got to have with people, then I wrote stories and sent it off to a designer to get pictures on it,” Beasley said.

During her free time, Beasley was able to travel to other European countries.

“I lived in England, but I got to leave the country a couple of times,” Beasley said. “I went to Paris and saw the Eiffel Tower and took some tours in Amsterdam and Belgium.”

Beasley also enjoyed living in London during the World Cup this summer.

“Being in Europe in general for the world cup was incredible,” Beasley said. “It was such a sense of the country’s pride. They would broadcast the games everywhere for everyone to see.  People would even get off early from work to watch.”

Beasley is grateful for the opportunity to intern overseas.

“I had a great time experiencing other cultures and just seeing how different the rest of the world is from the United States,” Beasley said. “It’s a great job experience and it’s great I can say that I worked in another country.” 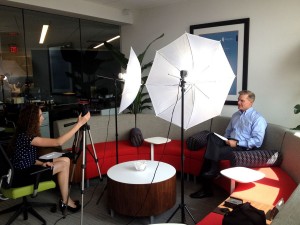 A normal day in the office for Bumgarner, who is a film and media studies major, would consist of producing videos for the company’s YouTube channel. Bumgarner would often sit down with one of the employees and interview them about things going on in the office.

“I have never really had a full professional job before as a college student,” Bumgarner said. “Being in an office environment was really different.”

Bumharner was also featured in a video, where she was able to film herself as an intern for one of the segments.

While Bumgarner has her own YouTube channel that she updates regularly for fun, she said she has always wanted to work with film professionally.

“I just enjoy it so much,” Bumgarner said.

Bumgarner commuted from her Fairfax home to arrive at her job in Alexandria every morning.

“I just drove up 495 every day,” Bumgarner said. “I felt like I was in the real working world.”

Bumgarner says she interviewed with several places before getting the internship with Monument Wealth Management, and encourages other students not to give up when looking for an internship. She found out about the internship on a website called internmatch.com.

Baumgarner was recently offered the opportunity of working for the company part time in the fall.