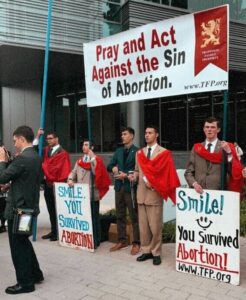 Accounts of harassment, violence and antisemitism from the student body.

Mason’s Fairfax Campus is home to one of the most diverse campuses in Virginia. As part of Mason’s legal requirements, they have a designated free speech zone located at Wilkins Plaza, which is necessary for all public Virginia Universities. Any person may use this space to broadcast what they believe in personally.

Mason’s Free Speech page says their zone while providing the benefit of inclusivity, may also welcome discussion of perceptually offensive topics on campus. “…our efforts to build a civil and respectful environment cannot be used as reasons to limit the rights of others to express views that we may consider misguided or even offensive.”

Since last year, protests from outside parties have stirred controversy and debate from bypassing students. “Warning: Drunkards, Pot Smokers, Homosexuals, Liars, Thieves, Immodest Women, Atheists, Judgement day is coming for you!!” one sign read in an Oct. 17 protest by Wilkins Plaza, bringing in a crowd.

One week following this on Oct. 25, a second visiting group protested abortion practices near Horizon Hall as they played bagpipes to students walking by, with pamphlets sponsoring reasoning against same-sex marriage. In another protest days later, students alleged seeing trespassing protesters recording students on the roof of Skyline.

Outside of free expression rights, dozens of students at Mason have come forward and detailed allegations of harassment, violence, antisemitism, discrimination, and being recorded without consent by protesters.

Virginia is a one-party consent state, which legally allows parties to record others in public. Multiple students who did not interact with the protesters reported being recorded by these groups on their way to class, and have been uploaded online.

Junior Marina Girgis was one of many who came forward about being recorded without her consent. “I was walking by from Horizon Hall to the Johnson Center and I saw a big crowd but I didn’t think much of it and didn’t know what it was.” Girgis said.

“Then I noticed that someone was recording me as I walked by…They did not say anything to me or even tell me that they were recording me. I felt uncomfortable and worried because I don’t want photos or videos of me online or anywhere that I did not consent to.”

The protests have taken their antics a step further to follow, shout at, and harass students as they complained about the response from Mason PD.

Freshman Mackenzie Procter-Green tried to avoid interacting with the Oct. 24 protesters but was berated for not accepting a flier and claimed that the police did not assist with the situation.

“We said no and were extremely dry with our answers so that they would go away. They continued to harass us and kept insisting we have a debate with them. I was then recorded by them and I asked them on several occasions to stop recording me, and they told me that they had the right to and started to antagonize me.” Proctor-Green said.

“The police were no help either and I no longer feel safe on this campus…GMU and GMU police have insisted we ignore them.”  Procter-Green said.

“During the anti-abortion protest last week, they had body cameras. Also, when there was a police officer that was actually at the site, he fist-bumped one of the protestors. It’s just really frustrating to see that Mason Police doesn’t have our backs…I’m afraid that if I get caught on their body camera, which I have been accidentally, they’ll dox me.” Rawat said.

Members of the LGBTQ+ community have been harassed and called homophobic slurs.

Senior Gillian Garnett was one of the multiple students who reported being followed by the protesters for being part of the LGBTQ+ community.

“I have pride pins on my book bag, and I was yelled at by the protesters when they saw the pins. They followed me for a few feet before I got far enough away from the protest.” Garnett said.

Junior Emily Blum was talking to a friend when they were suddenly discriminated against for being transgender.

“I was repeatedly and loudly yelled at by one of the protestors about my transgender identity. They denied that I was a woman, claiming I’m just pretending, all the time interrupting a friendly conversation I was having with someone else.”

Sophomore Ivy Hutton talked to a protester who claimed to have identified as transgender in the past but claimed they were being dishonest.

“One of their members started claiming he was a transgender woman, and that god saved him. He showed a before and after picture of his “transition”, which to me, a transgender woman, was obviously falsified. To confirm this, I asked how long he [protester] was on HRT (Hormone Replacement Therapy, the official term for transitioning via medication) and he did not know what it was, confirming to me and those around that he was lying.” Hutton said

There were also occasions where protesters took antisemitic actions.

Procter-Green heard antisemitic remarks from the Oct. 27 protesters who were comparing abortion to the Holocaust through imagery.

“My friend came up to them and was like “Dude, why are you showing these images while I’m trying to go to class? It’s disgusting,’… and he said, ’Would you rather see a photo of a slaughtered Jew from the holocaust?’” Proctor-Green said.

Other students like senior Liam Fischer complained about the excessive noise.

“The anti-abortion protesters have been very loud and disruptive. I could hear them from my class on the fifth floor of Horizon when they were on the opposite side of the building. I understand that they have the right to be here, but they don’t have the right to disrupt the classes that I paid for.” Fischer said.

Other protesters have made statements about victims of rape to students, claiming that they should not abort any resulting pregnancies, but should also have to marry their rapist.

Some of the multiple protest groups who came to Mason were: Moments With The Book, Human Life Alliance, and The American Society for the Defense of Tradition, Family, and Property. These are all stationed in Pennsylvania or nearby. All protests have been focused on selling books across their websites, some with difficulty finding who is behind their organizations.

Astro-turfing, as famously explained by John Oliver, is a ploy in which groups similarly will use social movements and attention to garner money, such as book sales. The groups additionally have YouTube channels where they upload students’ faces online.

Visitors are treated as separate entities to students and staff. Because of Mason’s upholding of free speech rights, they stress that Mason must allow protesters of all views to voice their thoughts. Voicing words such as slurs would still be free from reprimands due to free speech under the clause. The one-party consent law applies to being recorded without consent. However, conduct issues, especially threat-based harassment, doxing, trespassing, and physical violence would break both University Policy and Virginia Law according to the Virginia Rules Organization.

According to University Policy, there are protest guidelines that these groups must follow. Protesters on Mason property may not create amplified noise next to classrooms, libraries, or residence halls where they interfere with academics at Mason and they cannot exceed 65 decibels at any time. Protestors cannot sell or advertise products, or hang up and leave posters unless explicitly approved by Mason.

The Mason Police Department and the Office of Student Conduct did not respond to requests for comment.

To protect themselves from the actions of these protesters, students have been urged to cover their faces and bodies with long sleeve shirts and masks when walking to class so that protesters cannot record and leak their private information. Others urged students to stop giving attention to the protesters altogether and make constructive changes. According to the testimonies, students who are marginalized may need to take the most precaution to protect their safety.

Students should understand their rights on campus. If these rules are broken among others found in Mason’s University Policy, students are directed to contact the Mason Police or reach out to the Office of Community and Local Government Relations.