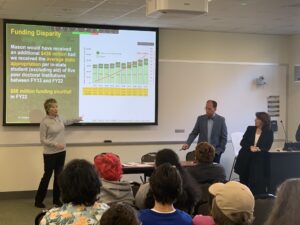 Students had the opportunity to ask the administration about tuition changes and find out where their money is going.

Topics of the day included increased funding and support for the Stay Mason Emergency Fund, the upcoming tuition credit being given to undergraduate in-state students, funding for mental health programs, and the funding gap between Mason and other prominent institutions in Virginia.

Burge, Dickinson and Pascarell began by answering questions from students and explaining the three percent tuition credit that will soon be issued back to in-state, undergraduate students.

When asked what their thoughts on this tuition credit were, in-state students senior Ja’Corie Kinsey and freshman Thalia Edwards agreed that they felt the rate of in-state tuition was fair. Edwards is grateful for the tuition credit and says, “I think that this credit is much needed because my family can barely afford to keep me on campus and anything to lessen that cost would be helpful.”

Kinsey agreed but says that out-of-state and graduate students often give up more to leave their homes and study at Mason for a “more in-depth education” and therefore should also be recipients of this refund. Kinsey said he finds it “highly unethical” for the university to raise tuition even more, for certain groups of people and not others.

Out-of-state student senior Ainsley Fox also disagrees with the decision to only give tuition credit or assistance to in-state undergraduate students.

“From the perspective of an out-of-state student, we make up a huge portion of the student body and we work just as hard. Out-of-state tuition is already so much more expensive than in-state tuition so I think Mason should try to make changes that would help all students, especially the ones who are paying more to begin with.”

The panelists then presented a series of slides that focused both on the tuition credit and the funding disparities between George Mason and other prominent schools in Virginia such as the University of Virginia, Old Dominion University, William & Mary, Virginia Tech and VCU.

When compared to these five universities, Mason has the second lowest in-state tuition and the lowest level of support from the state of Virginia. In addition, per in-state student, Mason is nearly $5,000 below the mean of other universities in the state. These differences add up to a roughly $58 million funding shortfall in the fiscal year 2022.

Members of Student Government, including Student Body President Sophia Nguyen, attended the town hall and spoke about how students can impact this issue through Mason Lobbies.

Burge encouraged Virginia students to ask their elected officials, “Why should a student at any of these other schools matter more to the state than students at George Mason? Our students deserve the same resources and attention that the rest of Virginia university students are already receiving.”