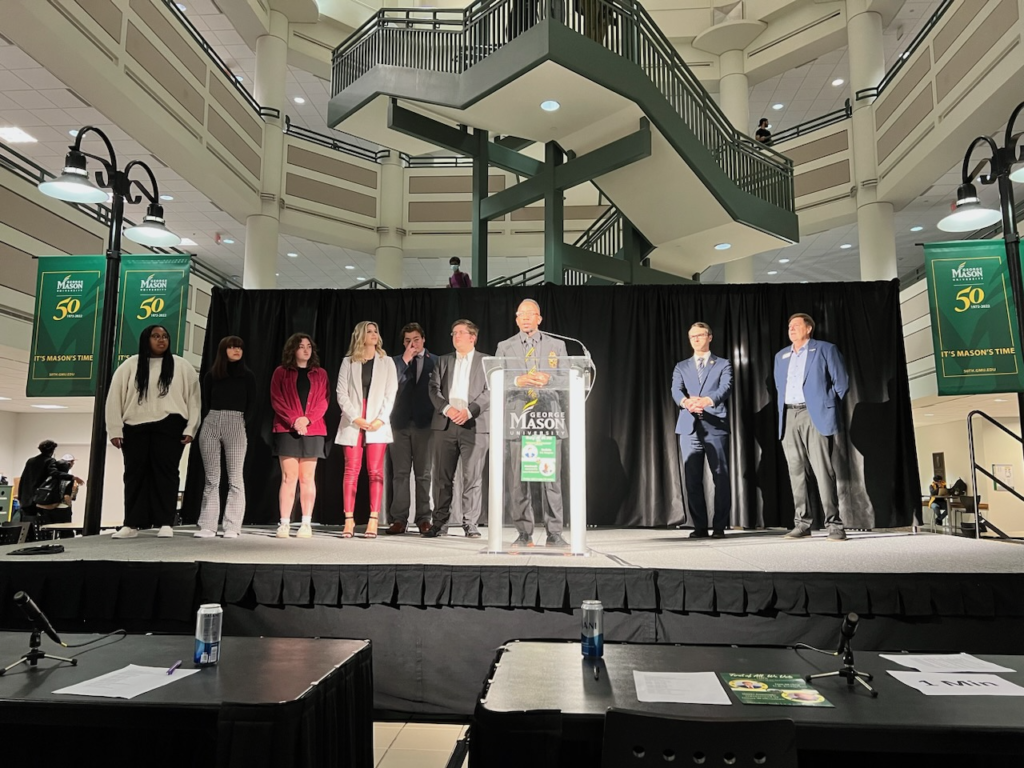 With the midterms creeping closer, the “First of All, We Vote” event was held in the Johnson Center Atrium. The debate was between Republican challenger Jim Myles, who is running for Virginia’s 11th District and Democrat James Walkinshaw, on behalf of incumbent Congressman Gerry Connolly. It was moderated by Student Government, Alpha Phi Alpha, GMU Dems and GMU College Republicans.

Walkinshaw, who was Rep. Connolly’s Chief of Staff for 11 years, is the Fairfax County Board of Supervisors member representing the Braddock District. Rep. Connolly was unable to attend the debate due to being in Croatia as part of a congressional delegation meeting with European leaders to discuss Ukraine.

The candidates debated on issues relevant to the 11th District, which encompasses the City of Fairfax and Fairfax County.

Myles opened the debate with a statement about his education before criticizing the questions for being narrow and limited in scope.

With the first question revolving around the topic of climate change, Myles said, “I think climate change as a term is just something that’s going to happen over time…I think the term ‘climate change’ has really been used as a scare tactic for young people.”

He then went into points about focusing on inflation, “When I go out into the communities, with family and friends, I think inflation really jumps out at people as one of the biggest problems. It’s at eight percent and it’s effecting a lot of families, and I think it’s worthy of discussion, but we’ll have to do that another day.”

In terms of abortion, Myles staunchly came out as pro-life, calling abortion a “huge tragedy” and was in favor of the overturning of Roe v. Wade.

On the topic of student loan forgiveness, Myles was against it, noting that it wasn’t fair for those who didn’t go to college to have to pay for others’ student loans.

When asked a question about LGBTQ+ rights, Myles stated, “I think this community has an extremely strong lobby and I think they have an extreme amount of power in this country.”

He then doubled down that the LGBTQ+ community has no need for additional legal or political protections, but as a judge, he thinks that all Americans are afforded equal protection under the Constitution.

Walkinshaw took the stage on behalf of Rep. Connolly next, with an opening statement refuting Myles’ claims, “We have a choice between Democrats and Republicans. We have a choice between preserving our democracy or choosing a party that has consistently signaled and said that they want to put our democracy at risk by threatening the sanctity of our elections. And if they win this election in November, they will continue to do that.”

Walkinshaw made it clear that Rep. Connolly is the clear choice for Mason students and the 11th District, “I think the great thing about Gerry Connolly and Jim Miles is you have a very clear choice. And [with] Gerry Connolly, you have someone who’s pro-choice and supports a woman’s right to choose and [with] Jim Myles, you have someone who’ll criminalize women who choose to have a health procedure.”

The crowd at the debate noticeably got rowdy once Walkinshaw took to the stage, with some screaming expletives at each other.

He then stated the difference between the two candidates on gun ownership, “[With] Gerry Connolly, you have someone who supports reasonable restrictions on gun owners to keep guns out of the hands of criminals and people who are dangerous or a risk to themselves and others. And [with] Jim Myles, you have someone who’s held his campaign rallies at the NRA and at gun shows.”

Walkinshaw then went on to state that the U.S. should focus more on becoming carbon neutral, in line with the Bipartisan Infrastructure Law that was passed earlier this year by the Biden Administration.

Walkinshaw said that Rep. Connolly is for protecting LGBTQ+ rights and will be key to making Virginia a place for all, including economically like attracting Fortune 500 companies, “Key to that track record of attractions investment and jobs here to Fairfax County is demonstrating that we are a place that discriminates against nobody.

When both candidates were asked why Mason students should vote for them, Myles stated his interest in academia and almost taking a professor role at the Antonin Scalia Law School before the campaign kicked off. Walkinshaw stated that Rep. Connolly has come through time and time again for Fairfax County and will continue to do so.

Students can vote on Election Day on Nov. 8 at Merten Hall.