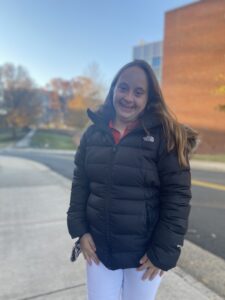 Who did you recently interview and why?

What is the show about?

Born This Way is a show centered around the lived experiences of people with Down Syndrome. It was on for a while and then it was discontinued. So, I wanted to get an update on how he was doing since the show. I had seen the show before, and went to a private screening for it. I did meet a few cast members there. It’s docu-series meets reality TV a little bit!

Why did you choose Mason?

I wanted to be close to my parents in D.C., but I was also looking for a place that would accept me for who I am. The inclusivity and diversity were important to me when making my decision. I started in the Mason LIFE Program but later applied to be a full-time member of the Mason family in 2018. I have a lot of friends from the program I still talk to today, though.

What drives you to be involved on campus?

I am currently a part of Gamma Phi Beta, Mason Hillel, Best Buddies and Mason Dems. I like having a group of like-minded people who not only accept me for who I am, but the uniqueness I bring to the table. I like to be vocal about my uniqueness because there are a lot of students who have disabilities as well. I like to be vocal about disability awareness on social media and in my organizations. I do not see the disability community being celebrated enough on campus, though. It would make me happier to see them gain more recognition.

What are your biggest accomplishments so far?

I am taking a human trafficking class where I organized a fundraising project. We tried to educate the Mason community on the topic with kiosking too. It is an important subject, especially since COVID-19 has shed a bigger light on human trafficking. Another accomplishment I had was sponsoring and passing Madison’s Bill to allow Mason Life students to run and vote in Student Government elections.

IN DEFENSE OF COFFEE GIRL

IN ABANDONING THE MASK MANDATE, MASON HAS ABANDONED ITS VALUES