On March 24, news broke that Virginia Thomas, wife of U.S. Supreme Court Justice Clarence Thomas, had exchanged around 29 text messages with then-chief of staff, Mark Meadows, imploring him to do everything he could to keep President Donald ViTrump in office, despite losing the 2020 election.

The content of the text messages was included in the more than 9,000 pages of documents that the former administration turned over to the House committee investigating the Jan. 6 attack on the Capitol. Virginia Thomas’ attempts to influence the White House to overturn the 2020 election have exposed a potential conflict of interest between her husband, Justice Thomas, and the Supreme Court.

As of now, no evidence has been found that Justice Thomas shares his wife’s views or that he knew about the messages at all. Despite this, Virginia Thomas’ support of President Trump’s post-election shenanigans is quite public.  Shortly after the election, Virginia Thomas attended a “Stop the Steal” rally, protesting the verified election results.  It is undeniable that Justice Thomas is aware of his wife’s views and should be equally aware of how the American public may view that in conjunction with his role as an impartial interpreter of the Constitution.

Since then, Justice Thomas has authored dissenting opinions in favor of the Trump administration related to claims of election fraud and the Jan. 6 investigation.  In Feb. 2021, Justice Thomas issued a dissenting opinion after the Court ruled against Republican efforts to challenge Pennsylvania voting laws.  Justice Thomas declared, “An election free from strong evidence of systemic fraud is not alone sufficient for election confidence,” despite numerous organizations – including Trump’s own Department of Homeland Security – declaring the election to be “the most secure election in U.S. history.”

More recently, Justice Thomas dissented from denying former President Trump’s application to withhold the aforementioned records from the Jan. 6 committee. Justice Thomas was the only member of the Court who was willing to grant the application.

Despite how it looks, it is perfectly reasonable to believe that these decisions could have been impartial and based on Justice Thomas’ independent interpretation of the Constitution. After all, Justice Thomas is considered to be one of the most conservative members of the Court.  Unfortunately for Justice Thomas, even if he is granted the benefit of the doubt, it does not mean that he is absolved from his duty to uphold the integrity of the nation’s highest court.

Given the publicity surrounding Virginia Thomas’ political actions and the conflict of interest for Justice Thomas, he should have recused himself from any cases related to the 2020 election and the Jan. 6 investigation.

Justices on the Court frequently recuse themselves from cases that present conflicts of interest. Members of the Court such as Justice Stephen Breyer and Justice Samuel Alito have recused themselves numerous times from cases due to “family ties” – reasoning that applies here to Justice Thomas.

Even if Justice Thomas’ previous decisions on controversial Trump-related cases were based on his independent interpretation, he should have prioritized the integrity of the Supreme Court over his own desire to deliver decisions, especially during a time where approval ratings of the court are declining. 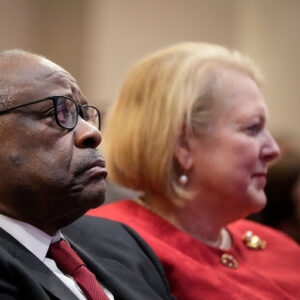 Photo by The New York Times

In a period where the Supreme Court is becoming more politicized, the last thing America’s strained institutions need is a Justice on the highest court delivering decisions despite obvious conflicts of interest. Justice Thomas demonstrated his inability to address these conflicts by recusing himself from cases, and he must resign to protect the integrity of the Court and America’s institutions.

THE WORK OF STUDENT GOVERNMENT

KOCH INDUSTRIES TO STAY IN RUSSIA