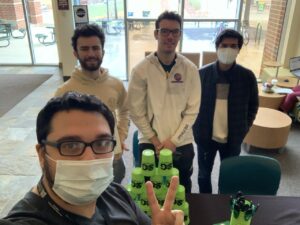 After a competitive gubernatorial election last November, students across campus have increasingly come to see the importance of participating in elections as their consequences affect everyone.

While you’re reading this, I’d like you to do me a favor and pull out your MasonID. You should see the following on the front: your G-number, name, and classification as a student. Additionally, you should see emergency numbers on the back, including the Mason Police, the National Suicide Prevention Hotline and the National Sexual Assault Hotline.

Those numbers were put there by the Student Government.

If you’ve ever used the Stay Mason Fund, the Grove, customizable minors, or the parking citation test among other services, odds are Student Government had a hand in putting them together. Our work with the university administration is often a collaborative process that allows for ideas from students to be realized on and off campus through the hard work of senators, board members, and executives.

Regarding the gubernatorial election last November, campus voting was included in the hard work of Student Government as well. For many years, Mason Student Government lobbied the City of Fairfax County to establish Merten Hall as a registered voting precinct wherein students could cast their ballots.

Whether or not students realize it, the work of Student Government is being done all around us. President Natalia Kanos and Vice President Veronica Mata lead the Executive Cabinet in projects on their platform such as expanding food equity in dining halls, administering the Patriot Period Pilot Project to establish feminine product repositories within bathrooms on campus such as the one on the third floor of the Johnson Center, and recreating the design of MasonIDs to allow for individuals to have their preferred pronouns displayed.

While we in Student Government know that students may not follow the work of the Kanos Administration as closely as they would the Youngkin or Biden Administration, the student body may have confidence that great work is indeed being done.

My branch of Student Government, the Student Senate, keeps busy as well. Vice-Chair Noor Abuzinadah and Secretary Jana Shananier, as mentioned in the article “The Case for a Larger Prayer Space at Mason,” are working on creating a campus Muslim prayer space.

Chair Sophia Nguyen is actively working on planning a Spring Farmers Market on April 12 and Chair Paul Wyche is coordinating with the City of Fairfax on a Spring event to take place around Easter.

As for me, I’m working on a syllabus translation project alongside Secretary Ellie Scott and, with the help of my peers, I’m setting up various self-defense services on campus such as a pepper spray distribution program. On my own, I’m trying to renovate the Grove and restore the Mason Stewards program.

I’m new to the position of Chair so I have a lot to learn about how to lead my committee and, more importantly, how to serve the student body.

As a public servant, I am always accessible to the student body and anyone can feel free to email me at zhamid@gmu.edu to share any ideas or concerns with Student Government. You are also welcome to come to visit me and my colleagues in the Student Government Office located in the Hub, as well.

More than anything, we are here to serve.

HAS THE SUPREME COURT BEEN COMPROMISED?