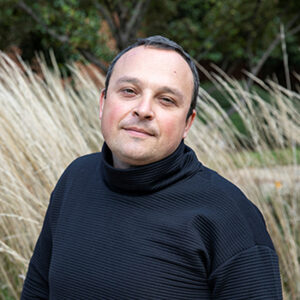 As conflict continues in Ukraine, Schar School professor Anton Lingusha reflects on his time as a Ukrainian citizen before he was exiled in 2014.

“All my beloved people in Ukraine now, are under very big dangerous situations. It’s not only about how dangerous it is, it’s now about how powerful Russia has gotten, ” Lingusha explained.

According to a press release by the Schar School, Lingusha had previously worked at his alma mater Donetsk National University in 2014 before he had to flee the country along with 600 other Ukrainian teachers due to a Russian-backed separatist takeover.

Lingusha was accepted into the Schar School for the New University in Exile Consortium program, which aids endangered scholars and provides them with schooling resources. Other notable members of the program include Georgetown University and Barnard College.

“I’m so proud to be Ukrainian. As I teach at these American universities, I can only request all the support they can give me during this era of dark times in Ukraine.” Lingusha explained. “I do follow through possible options to help with fighting against Russian propaganda.”

As a Mason professor, he has continued his academic work on the media’s influence on politics and culture, specifically propaganda and misinformation. At the Schar School, he teaches the course Media and Policy in the Era of Fake News, which is more important now than ever.

Lingusha expressed his remorse on the recent news of Russia’s invasion of Ukraine. His remorse for his loved ones that are still in Kyiv, Ukraine and how he is instructing his students during class in regards to the war.

According to CNN, Kyiv, being the capital of the country, has now transformed into a trench of makeshift blockades and Ukrainian citizens on the forefront, ready to protect their beloved city.

“Now in Russia, the government has now cut off Youtube, Facebook, Twitter and all outlets. Now, Russian citizens watch only authoritarian television without any other different types of outlets.” said Lingusha. “There is no other different information. Russian people have no opportunity to view Western media.”

President Washington announced that Mason will be offering Ukrainian students and staff extra assistance through all counseling and psychological services on campus. He stated in his address that the Ukrainian word “razom” which translates in English as “together”, is what Mason needs to express in the spirit of those that are in need right now.

MASON STANDS IN SOLIDARITY WITH UKRAINE