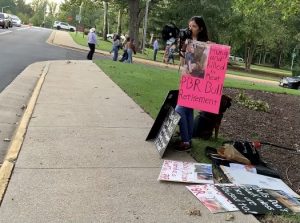 As people arrived for the two-day event where 45 top bull riders competed for a championship title, Lysippe stood outside with signs and flyers to inform event attendees of the abuse bulls allegedly face.

For much of the protest, Lysippe was alone. The other activists who said they would come did not show up. Lysippe said she has never had this happen before. Despite her disappointment, Lysippe continued her protest — and another protester eventually joined her.

Throughout the protest, Lysippe shouted into a megaphone claims against PBR and bull riding in general. She claims that bulls are kept in small dark cages, have their genitals tied in order to make them buck and are slaughtered when they can’t perform anymore.

“This is cruelty, not entertainment,” Lysippe said.

Lysippe explained that bulls are naturally gentle animals, and claims that bull riding events use cattle prods and loud music to shock and scare bulls into bucking.

According to PBR’s website, the organization considers the safety of bulls important and that “the bulls are treated with as much respect as, if not more than, the human athletes who ride them.”

The website explains that the organization has a strict welfare policy, which includes that the animals receive veterinary care when necessary, cattle prods are prohibited and that bucking is a natural behavior due to breeding rather than abuse.

Lysippe argued that PBR is lying. She claims that investigations have shown that the bulls are being mistreated.

Most event attendees passed without a glance. Some rolled down their car windows while driving by, or turned their heads to shout while walking by. One man said, “We love it.” Another said, “I paid so I’m going.”

EIGHT OUT OF 4,900 STUDENTS TEST POSITIVE FOR COVID-19