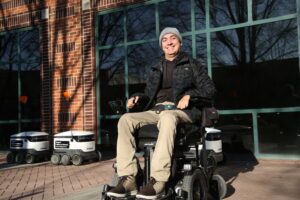 I first met Ricky Chang on the first day of the semester. He glided confidently into the classroom and introduced himself as our TA for COMM 208: Media Production. After hearing Professor Lance Schmeidler talk so highly about Chang, I wanted to know more: Here’s what he has to say about his story:

“I broke my neck on July 19th, 2008. It was a month after I had graduated high school. It was spinal cord injury and one trick gone bad [in my BMX days] that led me to this,” said junior Ricky Chang, gesturing to his wheelchair.

Re-accounting the accident reminded Chang of all the mental, emotional and physical hurdles he had to overcome inorder to get to where he is now.

“At first it was a lot of mental challenges and trying to overcome comparing myself to my past self, present self. Before, I had never had anxiety issues, and after the wheelchair, I had crazy amounts of anxiety. I had to rebuild who I am and accumulate myself in my surrounding area and learn how to talk to people in a different way” said Chang.

“Asking for help was one of the hardest things. Like asking people to open the door for me or just help me in other ways. In the classroom, anything physical can be really challenging because there is no way to accommodate everything,” he added. “I have to re-adapt myself to a new style of learning. For example, I can’t take notes on pen and paper anymore. So I have to re-program my brain to be a much better listener and capture all necessary details.”

A lot of factors went into adapting to this new learning style, such as work load, ability to focus, ability to listen, ability to ask for help, and ultimately, the ability to maintain a persevering attitude.

Chang uses his humor as not only a coping skill, but also as a way to shift people’s points of view to focus on his personality rather than just his physical disability.

“It’s  like doing mental gymnastics to re-route my brain to the way that is like, ‘Hey focus, get this done. It sucks you can’t do it like everyone else, but just get it done any way you can.’ Alternative routes are key to getting to the destination,” stated Chang.

Some of those routes can be talking directly with professors to get accommodations you need or using services on campus like the Disability Services.

“I make my presence known to the professor and anyone I have to work with (in the classroom). I essentially give them the facts and do my best to contribute and participate in any way I can. So I can meet goals and get whatever help I need,” said Chang.

Meeting goals and being able to grow inside and outside the classroom has allowed Chang to achieve things he never thought he would be able to do.

“My most recent accomplishment was getting back into driving. After I broke my neck I had a crippling fear of ever driving again because my body doesn’t work the same as everyone else does,” Chang said. “I have muscle spasms that can cause a car to shift. I  can’t have as much control over the car as I would want to but 13 years later, this past December, I finally got my license again. It was a huge accomplishment of me conquering my fears.”

Stand-up comedy is also something Ricky is proud of, because talking and relating to people can be a challenge with his anxiety.

“If I am able to put myself out there and fight my anxiety, it makes me happier that I am not held back by it. Overall my biggest accomplishment was getting the courage to start again,” he said.

In pursuing an education and hobbies such as stand-up, Chang has been able to gain more tools, resources  and knowledge that he can apply to all areas of his life.

“Something about myself that I want people to know is that I am human just like everyone else. There are times in life that people will treat me differently or look at me differently just because I am in a wheelchair,” Chang said. “I want people to not pity me or overly sympathize. It’s a bit cliche and everyone with a disability says it, but I want to be treated like everyone else.”

Chang says that he likes to take his disability with a dash of humor and a hint of lightheartedness. That way life seems more feasible, now that everyone is laughing and smiling.

“The people I get along with the most are the people who know how to treat me like a person, but also like a peer and make fun of me. There will be situations like we need to go upstairs, so everyone will be like ‘Okay let’s go upstairs!’ knowing I can’t use the stairs. We all laugh about it,” said Chang.

Some of his long-term career goals consist of getting back into stand-up comedy, becoming an interviewer, finding a way to combine his love of science and comedy together, working for a media production company, or perhaps even starting his own.

“Anywhere where I can let myself and others shine. I want to present people in their best light and give people the spotlight they deserve,” said Chang.